THE NET HAS BEEN CAST 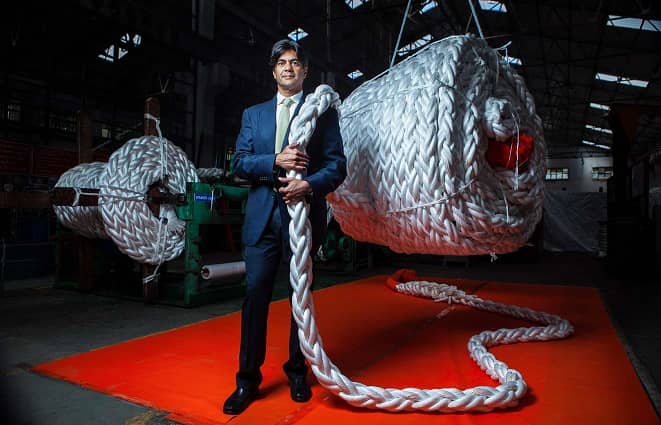 For decades, Pune-based Garware Technical Fibres made ropes and nets from man-made fibre. Then, third-gen entrepreneur Vayu Garware decided to pivot it into an innovation-led player. Not only has its stock shot up by 400% in the last four years, but the company has also found success in uncharted salmon-rich waters across the globe.

NOTE: THE NUMBER IN BRACKETS DENOTES LAST YEAR’S RANK; FORTUNE INDIA NEXT 500 RANKING IS BASED ON FY19 DATA.

IT IS A COOL JANUARY MORNING and the vista is pleasing. Large industrial sheds dot a mountainous terrain in Wai, in the foothills of Mahabaleshwar, a scenic hill station in Maharashtra. Apart from the one-toned clanking of machines from a few sheds, what prevails is the industrious quiet of women squatting inside the sheds, knotting giant nets (some are over a kilometre in length).

No, this isn’t a small cooperative in action. It is big business— worth ₹1,103 crore as of March 2019, in fact—for Pune-based Garware Technical Fibres, an increasingly sought-after maker of fishing cages for salmon farming, No. 291 on Fortune India’s Next 500 list. Its net has spread globally—literally—replacing those of competitors in exacting markets such as Norway and Canada; it is also setting up a new office in Chile. The company even got a patent for its nets in India in 2018 (it has filed for one in Chile, Norway, and Canada, among others, as well).

These are uncharted waters for Garware Technical Fibres which, till six years ago, sold 70% of its nets and ropes (primarily made from man-made fibres like nylon, till that point) in a commoditised manner. “We added value only to the rest. Today, that equation has turned around,” says Vayu Garware, 46, the Wharton-educated chairman and managing director of Garware Technical Fibres who decided to invest in creating a “unique product” (it took them four years to develop, but more on that later). “Now our products sell at a premium over even European competitors in all the markets,” he says.

The gains, according to a research study titled How Competitive Advantage Drives Churn in the Stock Market by Saurabh Mukherjea, founder and chief investment officer of Marcellus Investment Managers, are also because Garware is at that early ‘inception’ stage in a company’s life cycle, where it creates a new niche in the market, leading to a unique positioning and profitability. That makes news and enhances value, he wrote.