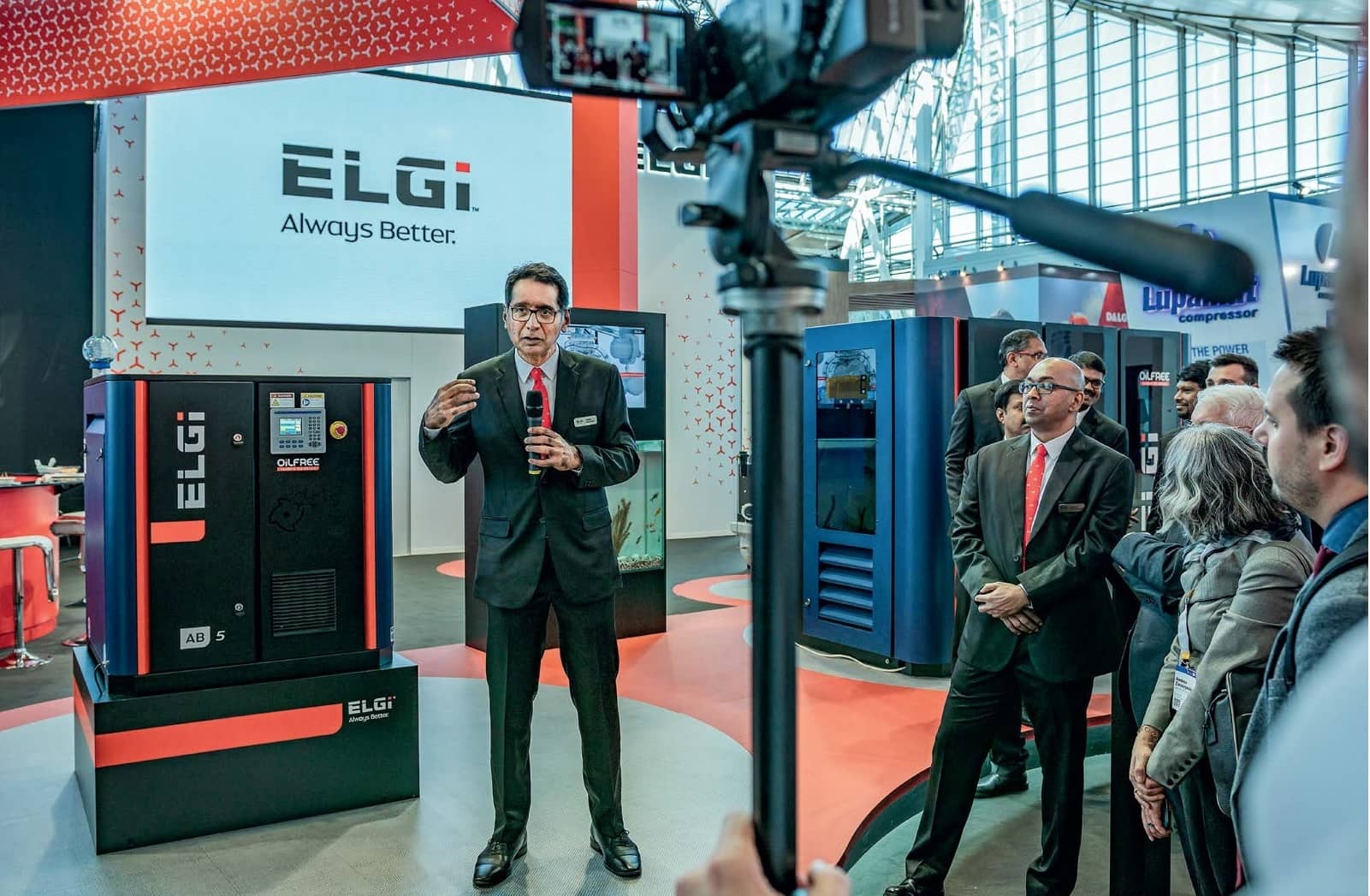 THERE ARE NO SHORTCUTS IN JAIRAM VARADARAJ’S VISION TO TAKE HIS ELGi EQUIPMENTS TO NO. 2 IN THE WORLD. HE DOESN’T JUST WANT TO BE BIG. HE WANTS TO BE THE BEST. INDIAN CAPITAL GOODS COMPANIES DON’T TYPICALLY TAKE THE BRANDED PRODUCT ROUTE BUT THE THIRD-GEN ENTREPRENEUR IS COUNTING ON HIS STATE-OF-THE-ART AIR COMPRESSOR TO DO THE TRICK.

T. Surendar
FOR JAIRAM (JAY) VARADARAJ, global domination by an Indian company was always conceivable. Even as a doctoral student of international business at the University of Michigan, U.S., his final dissertation was titled: “Internationalization of Indian firms: A study of technology acquisition, exports and foreign direct investment.” This was in 1987, in pre-liberalised India. His professor and avant-garde management thinker C.K. Prahalad was not impressed with his protégé’s choice of topic. He told Varadaraj that he was wasting his time; Indian companies did not have the muscle to make it internationally. But Varadaraj, 27 then, was neither dismayed nor swayed.

Over the last three decades, the third-generation entrepreneur and managing director of Coimbatore-based air compressor maker ELGi Equipments has made his thesis his mission. So much so that in 2010, he announced his intent of making ELGi the second-largest air compressor manufacturer in the world by 2027. (It is currently seventh in the global pecking order. In India, it is already No. 2, behind Atlas Copco.)

Varadaraj’s ambition is powered by the size of the opportunity. The global market is pegged at $15 billion, 80% of which is accounted for by the organized sector, comprising market leader Atlas Copco and Chicago Pneumatic, among others. The larger companies (including Kirloskar Pneumatic and Ingersoll Rand) have a similar hold on the $2-billion domestic market; the unorganized sector controls 20% of the industry and includes hundreds of manufacturers that play in the low end of business.

The demand, in turn, is driven by the ubiquity of the air compressor. This low-key industrial equipment sneaks its way into everyday life. Compressed air is used as a source of energy for railway braking systems, as air cleaners in dental chairs, and in food and beverage processing. It helps move unfinished vehicles and weld components in the modern automobile assembly line. You might also recognise it as a regular high-decibel feature of a walk in any city. Picture those noisy machines used to dig into rocks and hard concrete. In fact, air compressors are so common that they consume 10% of Europe’s energy output.

Varadaraj’s confidence, then, is understandable. What is noteworthy is his roadmap to top-of-the-class. For one, it doesn’t include any shortcuts. Going global can mean merely setting up offices in many countries, he points out. Or, exporting unbranded components to large global players. Take Bharat Forge and NRB Bearings whose products get used by the biggest automotive makers in the U.S. and Europe. These strategies create scale, but Varadaraj doesn’t just want to be the biggest. He wants to be the best. For that, ELGi must operate at the premium segment of complete products, engineered in its own brand name, in the most advanced markets.

This is the next logical step for Indian manufacturers, agrees Harshbeena Zaveri, managing director of NRB Bearings and member of the Confederation of Indian Industry’s National Committee on Capital Goods and Engineering. “India now makes components that are exported to make capital goods machinery globally and the next step will be to make the machines,” she says.

The AB (Always Better) series, unveiled by Varadaraj at the Hannover industrial fair earlier this year, is integral to this strategy. Five years in the making, the new products have the potential to revolutionize the business, he says. He is particularly optimistic about the oil-free variant, available for commercial sales from next year onwards.

For context, compressors fall into two broad categories: oil-lubricated and oil-free. Lubricated compressors account for 80% of the market because of higher energy-efficiency and lower costs. The oil-free option is three times more expensive but mandatorily used in contamination-free environments like the pharmaceutical and food processing industries. They are the greener alternative too, with the potential to save the nearly 2 million litres of oil that lubricated compressors dispose as waste. (Without the waste, they are also easier to maintain.)

The AB series oil-free product will be close to the efficiency of a lubricated compressor and priced at par, says Varadaraj. Factor in the lower maintenance costs and his hope for a game-changing product seems justified. “The machines are designed to be hassle-free and we are confident that we can pitch to replace even the lubricated compressors,” he says. “The opportunity is very big for us.”