A Suit of One's Own 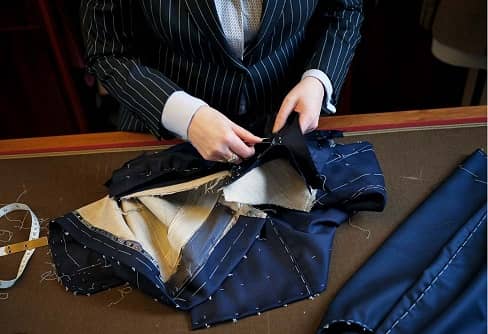 With these forward-thinking tailors breaking up the bespoke boys’ club, women no longer have to settle for off the rack.

LUXURY IS NOT ONE SIZE FITS ALL. One person’s lifetime dream of an Antarctic cruise is another’s frozen nightmare. Your storybook The 18th-century villa is my creaky old dump. So while some fashionistas thrill to personal shoppers’ ferrying flutes of Veuve Clicquot, my most indulgent shopping experience involves the revelation that my left leg is almost an inch—an inch!—shorter than my right.

That news, delivered by New York City-based designer Shao Yang, is followed by a running commentary on my apparent grab bag of a physique: shoulders (right about a quarter-inch higher than left), hips (slightly askew), and posture (the word “concave” was used). A bit disconcerting, yes, but there is a luxury in being so precisely seen after years of frustration about why I could never find pants or jackets that fit just so. And the real delight was still to come: Yang’s assessment is a first step in building a luxurious scaffolding designed to bring symmetry to my stubbornly asymmetric frame— a custom-made suit.

Men have known the airbrushing power of custom tailoring for centuries. But there was something new about what was transpiring in Yang’s Flatiron studio that afternoon: She and I—as well as the vast majority of her clients— are women. Yang’s business, The Tailory, is part of a small but growing cadre of tailors and custom suiting companies catering to women who want their own spin on what has long been the official uniform of the old boys’ club.

Today, the universe of women’s custom attire echoes the options available to men, though on a far more modest scale. There’s the traditional bespoke, an elite stratum that includes tailors like Kathryn Sargent, the first woman to rise to the title of head cutter on London’s Savile Row, and New York’s Dara Lamb, who’s dressed some of the most recognizable female chiefs of the Fortune 500. Bespoke, like many tailoring terms, tends to vary slightly depending on who’s wielding it but is generally agreed to include the process of making a hand-cut-from-scratch pattern and creating a basted (loosely sewed) garment for the first of multiple fittings to make sure the details are perfect.

More affordable is made-to-measure, which has experienced something of a boomlet in recent years. This more simplified—and e-commerce friendly— method generally involves a standard pattern, which is adjusted based on an individual’s measurements and preferences. Women can now order customized suits from companies like SuitKits (where the process starts online with a “virtual stylist”), Blue suits (which also offers bespoke), Sene (men’s and women’s options in stretchy athleisure fabrics), Gormley & Gamble (headquartered on Savile Row), and a handful of others.

Finally, there are those that exist somewhere in between—usually referred to by the catchall phrase “custom.” This group, which includes The Tailory, creates individual patterns rather than starting with an existing template but relies on technology to trim away some of the more time-consuming and technical aspects of the bespoke process.