Blueprint For A Remodel 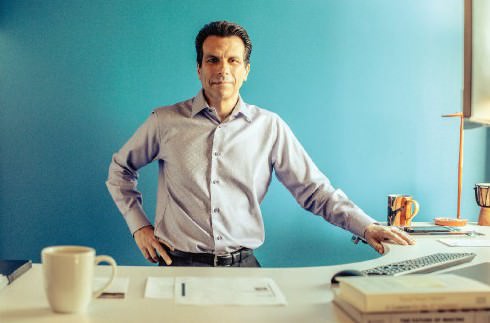 Autodesk’s software dominated architecture for three decades. but to stave off obsolescence, Andrew Anagnost has to rebuild the business.

Before visiting Andrew Anagnost, the chief executive of Autodesk, you’re supposed to walk through the gallery on the second floor of the company’s San Francisco office. A full-size model of a Mercedes Benz sports car grown from genetically modified seeds sits like a giant Chia pet. Just past it is a 3-D-printed nylon dress draped over a mannequin, which is next to a metal skull implant and a model of the tallest building in China. It’s a museum of a software maker’s greatest hits.

Upstairs, Anagnost, 52, awaits in a streamlined office, yoga mat tucked to one side. Two slogans greet the visitor at eye level. “Impulsiveness is not a virtue,” says one. And from his wife: “Positive vibes.”

It’s a welcome message at Autodesk, the 36-year-old pioneer in computer-aided design, or CAD, software. Anagnost got the job in June 2017 after a lengthy activist-investor battle and the resignation of his former boss. Autodesk had spent years searching for a second act, acquiring startups and pouring money into long-shot research. Anagnost had a simple mission: pick a winner.

Wall Street is betting that he’s picked the right one. Autodesk’s share price has nearly tripled in the last three years; its $27 billion market value is 13 times revenue. That’s a big bet on a company that has been losing money since 2016.

Anagnost’s pick: software for the building trades. The skills behind the algorithms of building and parts design will now be applied to the messy business of construction management. That meant tossing out other ventures and shedding 1,200 employees.