The Man Getting America Back on Track 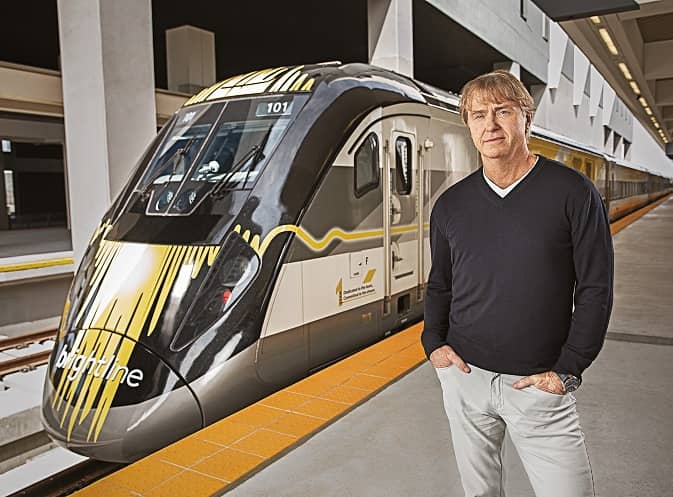 As the world grapples with how to make travel safe in the age of coronavirus, private equity billionaire Wes Edens is betting $9 billion that America’s transportation future is passenger rail.

Shouting over the noise of diners at a Mexican restaurant on the floor of a casino, buyout billionaire Wes Edens has come to Las Vegas, one of the cities least friendly to mass transit, to talk about passenger rail. “It’s not like I had Lionel train sets in my basement,” he says. “I wasn’t a train nut, but I love riding on trains. It’s my favorite form of travel.”

Even a couple months ago, that was audacious talk from the casual, sandy-haired 58-year-old who made his fortune with Fortress Investment Group and who co-owns the NBA’s top team, the Milwaukee Bucks. In a post-Covid world, as people settle in for a period of minimal travel, especially if it involves being squeezed among others, a bet on train service sounds downright crazy, especially since it comes with a $9 billion price tag.

Edens’ vision: tax-exempt bonds to create high-speed train lines linking Orlando to Miami and Las Vegas to Southern California. He sees a service modeled on the Paris-to-London Eurostar and is so confident the plan will work that he’s put more than $100 million of his own money into it. If things go right, his trains could haul nearly 20 million passengers in 2026, generate annual revenue of $1.6 billion and operating profit of almost $1 billion a year.

“Great fortunes are generally made by solving the most obvious problems,” Edens says, woven leather bracelets on his right wrist jiggling each time he lightly thumps the table. “Drive from Miami to Orlando with your family; drive from Los Angeles to Las Vegas. It’s a bad experience.”

So is the money pit known as U.S. passenger rail. Amtrak, since its creation in 1971, has consumed $52 billion of public funds and never made money. Its best year was the $30 million operating loss it reported in 2019. But inside those numbers, bloated by mandates from various members of Congress to run coast-to-coast operations in a country with little appetite for it, there’s a bright silver lining: Amtrak’s high-speed Acela service along the congested I-95 corridor between Washington, New York City and Boston earned $334 million in operating profit last year. In other words, find the right regions and passenger rail can work wonderfully.

“The lack of passenger travel by train in this country is a travesty,” Edens says. “It’s a gigantic opportunity.” His role model: the 19th-century industrialist Henry Flagler—co-founder of Standard Oil with John D. Rockefeller—whose rail projects essentially made the state of Florida economically viable.

Edens and Fortress took over Flagler’s South Florida rail line for $3.5 billion in 2007, and as his ambition blossomed, he pitched its potential to governors on both coasts. The effort paid off.

He secured tax-exempt bonds over the last two years to expand his Brightline rail service from Miami north to Orlando, a project with total construction costs of $4.2 billion. In April, he won a $600 million private-activity allocation from California. Up to $2.4 billion worth of bonds from that award, provided to California by the federal government, can in turn be sold to private investors. If all goes as planned, by 2023 the train will be whisking passengers from Las Vegas to a far-flung Los Angeles suburb in 85 minutes at speeds of up to 200 miles an hour. The $5 billion desert train also snagged private-activity financing from the federal government worth $1 billion and is awaiting a bond allocation from Nevada.

“His ideas are so big,” says friend and Los Angeles Lakers owner Jeanie Buss, a co-owner of Edens’ Cincoro tequila brand alongside Michael Jordan and the owner of the Boston Celtics. “We need thinkers like that in this country, people who see possibility and opportunity, because we’ve kind of lost that as a country.”