Where the Walls have years

The Walls of Dubrovnik in Croatia are an example of the old world’s need for, and fascination with, stone fortifications

Ever since the world discovered Dubrovnik, things have not been the same for this beach destination on the Dalmatian coast, fondly known as the ‘Pearl of the Adriatic’. Or for Croatia, for that matter.

And then came Game of Thrones. Things only got more frenzied, with fans of the immensely popular television series thronging its narrow cobblestoned lanes in search of their favourite filming locations, and specialised guided tours mushrooming almost overnight across town. On any good day in high tourist season, it is almost impossible to find a quiet spot inside the old town or walk into a restaurant for dinner without prior reservation.

If tourists who drive up or fly down to Dubrovnik are not enough, over 800,000 cruisers hop off at the port every year for a day’s worth of wander.

None of this is to say that I dislike this pretty town in the southern tip of Croatia, located nearly 600 km from the capital city of Zagreb and washed by the blues and greens of the Adriatic Sea. Dubrovnik’s fame and status as a Unesco World Heritage Site are utterly justified. We are in Dubrovnik just after the madness of the summer months has somewhat subsided, and we have the luxury of sitting in silence by the harbour late at night, with a view of the city’s night lights and in the company of cats that strut around like they own the city. Despite the rich history of the region,

Dubrovnik’s museums are fairly uninspiring. However, the War Photo Limited gallery—a permanent space showcasing the devastating 1990s war in Yugoslavia—is a sucker punch to the soul, with compelling images of the horror and futility of war. We stroll along the Stradun, the pedestrianized promenade (officially called Placa)—it is lined with lively cafés and pubs, new souvenir shops and old churches—that cuts through the heart of the old town. 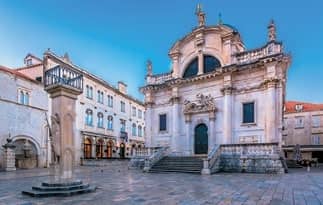 But what I have looked forward to the most are the walks along the city walls. And so early one morning, we line up for tickets to the Dubrovnik City Walls—locally called ‘Dubrovacki miri’—and find ourselves at the lower Pile Gate (pronounced Pile-uh), one of the main entrances to the walled city, complete with drawbridge and padlocks. It is one of the three spots from which to begin the walk, and after taking some local advice, we get there when it just opens for the day.