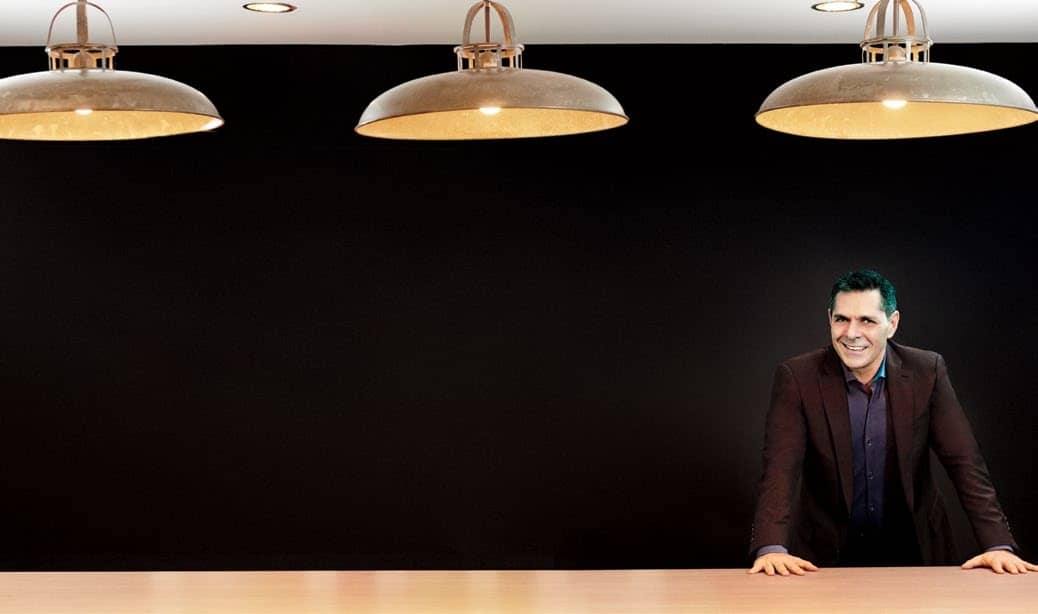 Daniel Lubetzky has spun chocolate, nuts and do-gooder rhetoric into a snack company worth billions. Maybe someday he’ll get back to his true passion: Changing the world for the better.

If anybody had said to me I would end up in the food business, I would have said, ‘What are you smoking?’” says Daniel Lubetzky, 50, founder of Kind Healthy Snacks. “I never thought in a thousand years I would be selling food.”

Maybe that’s because Lubetzky isn’t really selling food. Rather he is peddling health and altruism, at least the cheap sort you can buy in a 1.4-ounce fruit-and-nut snack bar drizzled with chocolate. Clues to Lubetzky’s deeper ambitions abound in his office decor: On one wall hang framed photos of him with Pope Francis, Barack Obama and Shimon Peres, the late president of Israel. Books about the Middle East line another. Motivational quotes from the likes of Mahatma Gandhi, Mother Teresa and the Dalai Lama are painted in the hallways.

The overt display of social consciousness is core to Kind’s business strategy. The company has sold 2 billion snack bars since its founding in 2004 and has done so by wrapping itself in a mantle of nutrition and social good. It’s almost all spin. Kind bars aren’t particularly good for you, and the very-much-for-profit company, which is partly owned by candy giant Mars, has given just a pittance to charity: About $2 million at last count. The company says it has been “generously supporting like-minded non-profits”. Lubetzky personally has given an additional $10 million toward Kind’s philanthropic efforts.

Still, the Kind spin works: The company has an estimated $800 million in sales and has made Lubetzky very rich. Using comparable publicly traded companies and recent merger and acquisition transactions in the snack industry, Forbes estimates that Kind is conservatively worth $2.9 billion. As majority owner, Lubetzky has a stake worth nearly $1.5 billion.

Lubetzky declined to comment on his net worth. He’d rather talk about the company’s mission—he calls it “the Kind Movement”— which is to “make the world a little kinder”. To that end, the company encourages both employees and consumers to “do the kind thing” by engaging in random acts of kindness. In practice this means hiring hundreds of full- and part-time workers to distribute #kindawesome cards (vouchers for a free snack bar) and samples of its fruit-and nut bars to random passersby.

By the company’s count—based on the number of #kindawesome cards doled out, employee volunteer activity and donations of snack bars to non-profits—it has facilitated 11 million acts of kindness since 2004. That’s essentially 11 million marketing campaigns.

Its social mission is largely marketing, too. Between 2013 and 2015, Kind gave less than half a million dollars to non-profits— peanuts for a company its size. It wasn’t until 2016 that it established the Kind Foundation, to foster “kinder and more empathetic communities”. According to its most recent filings, the foundation has $11 million in assets—$10 million of which was donated by Lubetzky—but has given away only $1.5 million in grants. In 2017, the foundation pledged $20 million over at least three years to try to connect students around the globe.

Kind would like you to think that eating its bars means you are being kind to yourself. Its 24 varieties of nut bars, made with chocolate or honey, come encased in a transparent wrapper, all the better to keep its promise to include only “ingredients you can see and pronounce”. Nutritionists, however, aren’t biting.

“On a scale of one to ten, one being Coca-Cola and ten being whole foods, Kind bars are likely a six,” says Dr Robert Lustig, a paediatric endocrinology professor at the University of California, San Francisco. “It’s less unhealthy than others. That doesn’t necessarily make something healthy.”

In response, Kind says it is “giving millions of people healthful options with our nutritionally dense snacks.”

“Daniel Lubetzky is a brilliant marketer,” says Marion Nestle, a professor of nutrition, food studies and public health at New York University (NYU). “[He] has positioned Kind bars as healthier and has managed to get them everywhere.”

Kind’s products are in momand-pop shops, Whole Foods, Target, REI and Starbucks as well as on Delta flights. According to the research firm Euromonitor, Kind ranks among the top five bestselling snack bars in the US, up there with Clif Bars and offerings from juggernauts like General Mills (Nature Valley granola bars), PepsiCo (Quaker Chewy Granola Bars) and Kellogg’s (Nutri-Grain Bars).