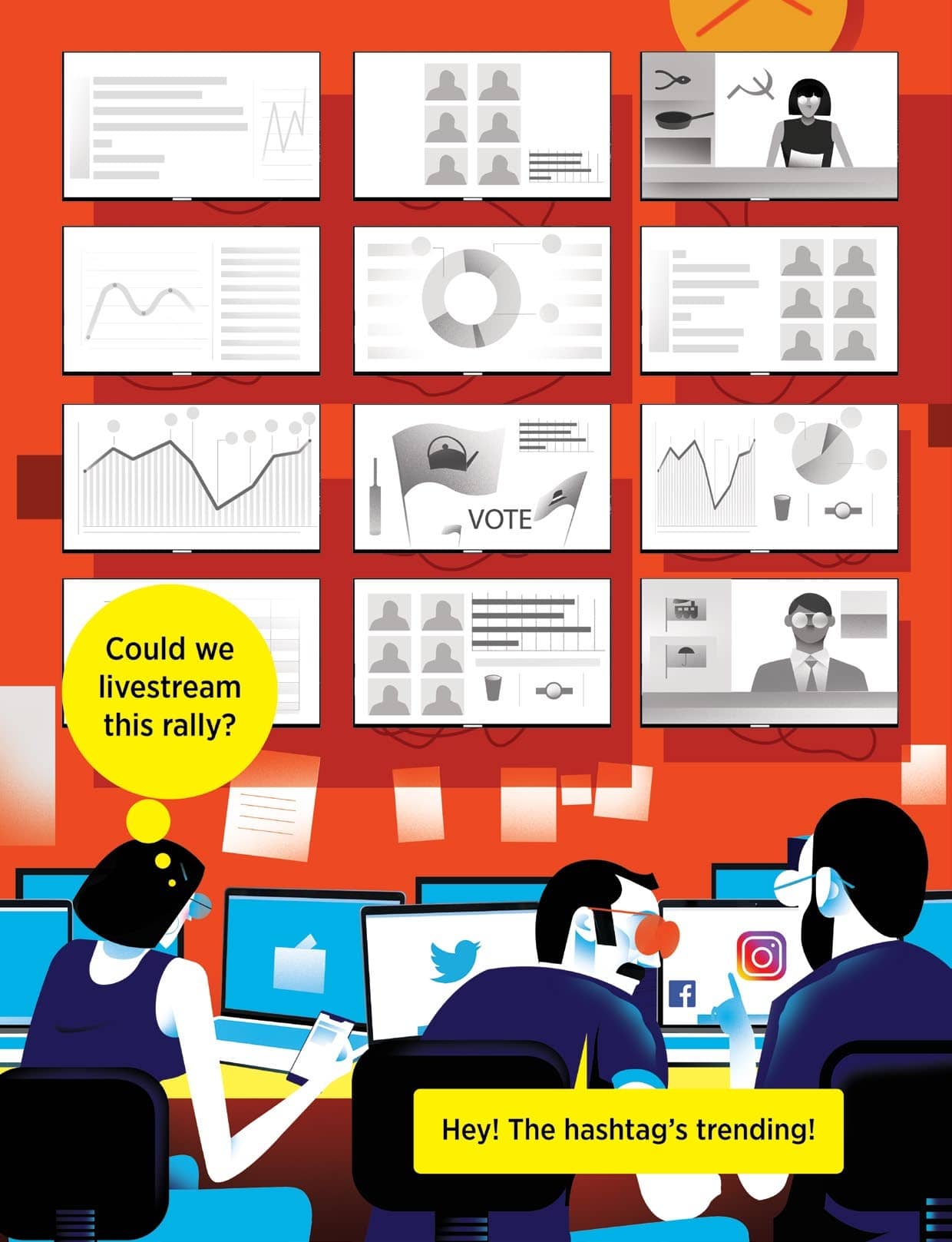 Ahead of the poll battle next month, social media cells are on a strategising overdrive to micro-manage party messages at the grassroots, strengthen offline campaigns, and serve as hubs for data processing and coordination.

On March 17, Prime Minister (PM) Narendra Modi prefixed his name with the word ‘Chowkidar’ (watchman) on Twitter, sending social media into a tizzy. Numerous Bharatiya Janata Party (BJP) Union ministers, chief ministers and leaders followed suit. The PM was possibly countering Congress president Rahul Gandhi’s ‘Chowkidar Chor Hai’ (the watchman is a thief ) campaign against him on corruption charges, especially on the Rafale deal, and the flight of economic offenders like Vijay Mallya and Nirav Modi during the BJP’s tenure.

Soon, Twitter was flooded with people adding ‘Chowkidar’ to their names and using the hashtag #MainBhiChowkidar. Lavanya Shetty was one of them. The youngest member of the BJP’s war room in Telangana, she was the only woman to have worked there during the state assembly elections earlier this year.

“I feel like a soldier,” says 31-year old Shetty. “It is not just about being on the border with a gun in your hand. A government also decides the fate of a nation and its people, so this is no different from a war-like situation. When I work for long hours ahead of the elections to bring the right kind of politicians to power, I think I’m a soldier for this country.”

The gruelling long hours of work that Shetty—a member of the Bharatiya Janata Yuva Morcha—is referring to is the month before the elections, when she dedicates about 17 hours a day to strengthen the BJP’s presence in Telangana. This not only means organising political rallies or curating inputs from the state for the party manifesto, but also following a successful social media strategy.

The 30-odd people with BJP’s IT cell in Telangana operate in a control room-like scenario: Observing the opposition’s digital strategies, watching TV channels, scouring through newspapers and magazines to track comments by politicians, preparing rebuttals for questions or accusations on social media, editing videos, creating interactive graphics, and minutely monitoring local constituencies to help their candidates campaign effectively. They also feed party positive information to a network of thousands of part-time volunteers comprising students, homemakers, IT professionals, entrepreneurs, lawyers and engineers, among others.

Shetty, a Hyderabad resident with a masters degree in political science, joined the war room in 2018 as she “believed in the party’s Hindutva ideology”. Her work in Telengana is even more crucial now, she says, because of BJP’s setback in the Rajasthan and Madhya Pradesh assembly elections. In Telangana too, MLA Raja Singh Lodh from the Goshamahal constituency emerged as the sole torchbearer for the party in the assembly elections. “We have to fight for more. There will be some kind of anti-incumbency in the North; and the South, especially Telangana, will have to compensate for that,” she explains.

THE BUBBLE JUST GOT BIGGER

Over 900 million people have registered to vote in the upcoming seven-phase general elections, results of which will be announced on May 23. Around 500 million have access to internet. There are 84 million first-time voters out of which 15 million are 18 and 19-year-olds raised in the post-truth social media age.