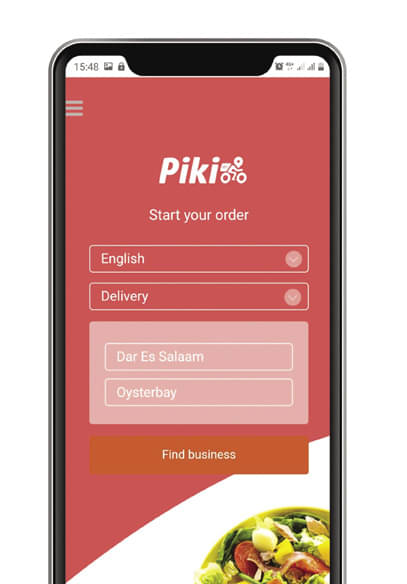 The newly-established delivery app industry in Tanzania is serving up old business in a new format, diversifying the e-commerce market and driving consumer behavior beyond Covid-19.

When Zadok Prescott first started the home delivery application, Piki Tanzania, he only thought of it as a supplement to restaurant dining. However, when Tanzania also fell victim to the Covid-19 crisis in March, Piki, which was still new and the only established app of its kind in the country, soon became the only way some restaurants were doling out their services.

“I think a lot of people took that decision to stay at home and avoid contact. So, we suddenly realized how important we were becoming,” says Prescott, also former CEO of Jumia Tanzania.

At the end of November 2019, Jumia, Africa’s leading online retailer known as the ‘Amazon of Africa’, had shut its e-commerce operations in Tanzania in a review of its portfolio.

However, ironically, since the beginning of 2020, in the very market that Jumia exited, multiple e-commerce platforms suddenly sprung up, from food and grocery delivery apps to ‘online malls’ that sell commercial goods, besieging a market still relatively new to online shopping and dining.

With Covid-19, the role these platforms played in the lives of local businesses changed almost overnight.

For Levant, a fine dining restaurant offering Middle Eastern cuisine in upscale Dar es Salaam, delivery was not the path they wanted to take, but had to.

“When Covid-19 hit, our sales were 90% lower. Our plan was to give an experience, it’s not only the food you eat… [but] we realized people were afraid, so we had to focus on delivery… take-away was most of our sales,” says Hussein T Hamadi, the owner of Levant, which started delivering through Piki when the pandemic hit and even started its own delivery service.

Although this is the path Levant opted, Hamadi does not see delivery and e-commerce playing a significant role in his business with restaurants now reopening in full swing in the country.

Piki surely has an advantage in the country with its reliable infrastructure and experience, but the commissions are not reasonable in Hamadi’s opinion, since his own delivery service costs him much less.

He would rather people came into his restaurant because this is part of the service he wants to offer.

In addition to that, Hamadi is opening yet another restaurant, with a more delivery friendly menu and where he hopes e-commerce may be more feasible.

On the other hand, Central Park Café, an American-style café and children’s park and venue that also works with Piki, does not see any way in which businesses, going forward, can avoid e-commerce.

“During these times, people rely on [Piki]… it’s basically a lot of the weight lifted off us for the pressure because it is a very tough market and things are very unpredictable here,” says Sidiqua Versi, co-owner of the café.

The fact that the liability for deliveries is also no longer her problem is an advantage, she adds.