The Right Place To Party 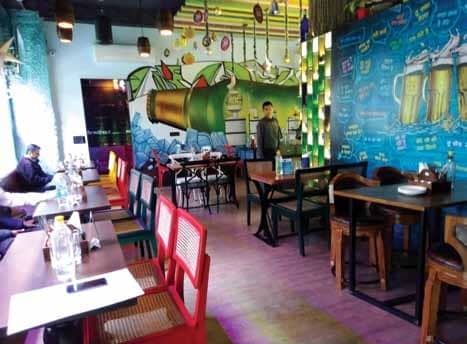 The Beer House Cafe, housed in Habitat Centre, in Indirapuram, Ghaziabad, came across as a decent place with a casual and friendly ambiance, where one can have an enjoyable evening out with friends and family.

Though Yudhveer Singh, the Founder of The Beer House Café told me that the “place has been designed while keeping the taste and liking of the youngsters in mind,” but I am sure the place would appeal to many so-called middle-aged and older men and women too, provided they believe that they are young.

Singh became a restaurateur after a stint in the real estate which again was preceded by a fruitful tenure in civil services with the government of India. This unusual career combination has perhaps contributed towards his vibrant personality.

What induced him to come up with this sleek lounge bar? “While thinking of foraying into the restaurant business, I realized that there is a sheer paucity of decent and at the same time affordable places for enjoying alcoholic beverages in Ghaziabad and its nearby areas, especially for girls. This induced me to come up with this outlet, as I felt the latent market need for the same,” disclosed Singh. His initial investment for the outlet ran to Rs.1.5 crore.

The lounge bar located on the first floor was launched in December 2018 and already the outlet, whose décor has a predominant theme of sand and sea, is attracting brisk footfalls. I saw a crowd of all ages having a whale of a time at the place, though I had to admit the majority of them were not only youngsters in spirit like me but also youngsters physically too.

As we sipped Hoegaarden beer with chicken satay and prawns salt and pepper, Singh informed me that “the outlet is spread across 1400 sq.ft. and has 56 cover area including bar chairs.” “We are getting 20- 22k guests per month, on an average,” Singh said with satisfaction.