The Craziest CEO In America 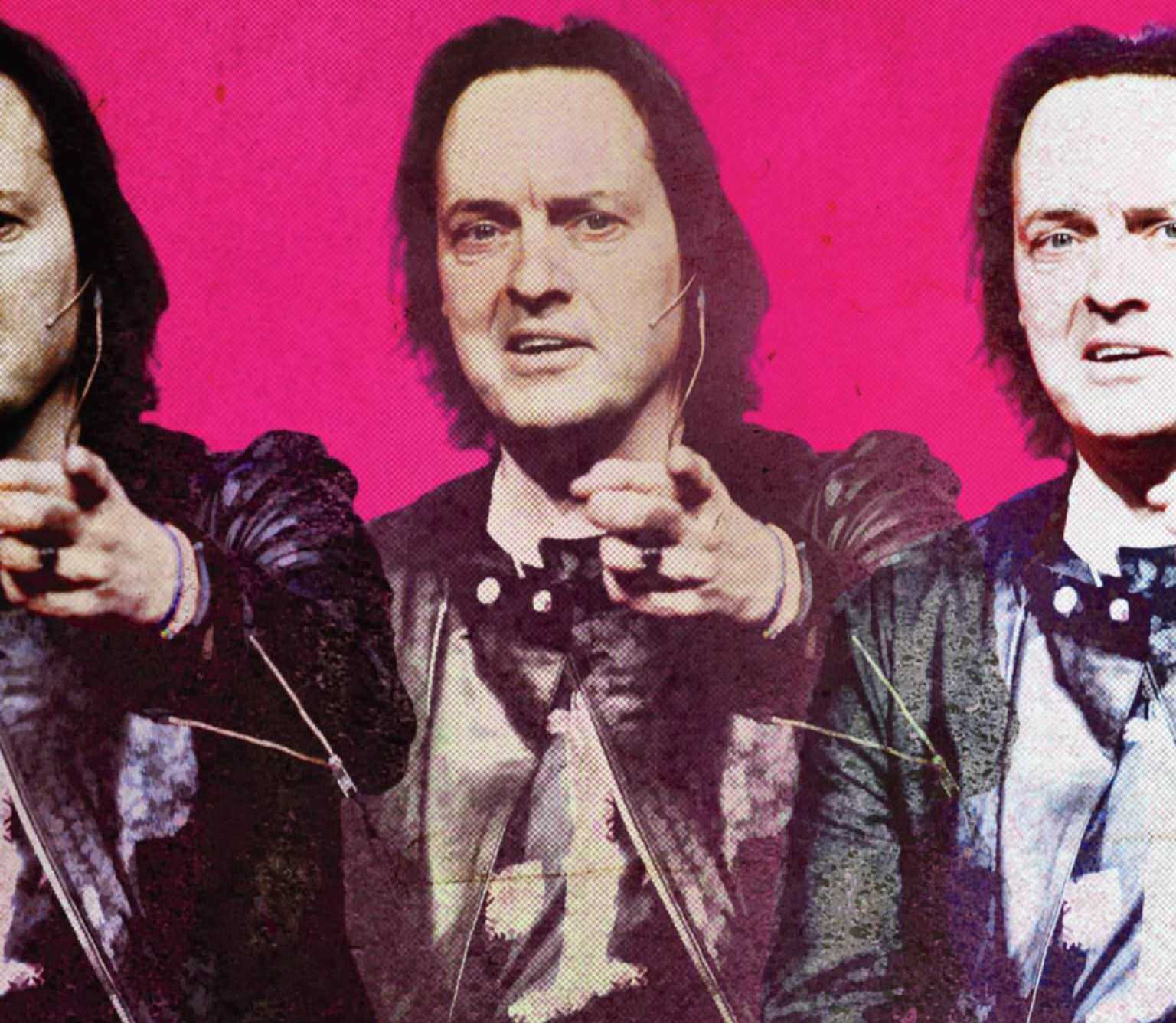 T-Mobile CEO John Legere is the profanity spewing shock jock of corporate America. Is this the future of leadership?

“THE FUCKERS HATE YOU.”

“I CAN’T WAIT TO WATCH THE PECKERS SCREAM AND CRY.”

Action-movie villains spit this kind of venom. Comedy writers hurl similarly foul tirades at one another. And as the sony email hack revealed, business executives can speak this way too. In private.

But in the open, CEOs - particularly those running multibillion-dollar, publicly traded companies - present a soothing stream of bromides, buzzwords, and nonanswers. All except John Legere, the man responsible for those quotes. At a downtown Manhattan loft this past March, the club music thumps as a crowd of telecom analysts and press wait expectantly for the CEO of T-Mobile to spew his gutter talk. He does not disappoint. Legere, 57, takes the stage at “Un-carrier 9.0,” the latest in a series of T-Mobile news events, wearing a black leather jacket over a black T-shirt emblazoned with a hot pink T on the chest. On his feet: hot pink skater sneakers. With his wave of shoulder-length brown hair and mild paunch protruding from what was once an athletic physique, Legere looks like he might have been a member of Kiss rather than a lifelong telecom executive. Once he starts talking, he becomes the anthropomorphized embodiment of the tall can of Red Bull in his left hand.

He launches his opening salvo: “It’s safe to say that our friends in the cozy little duopoly have been shitting themselves more in the past two years than in history.” Legere is going straight at T-Mobile’s much larger competitors, AT&T and Verizon. “Dumb and dumber,” or “the pricks,” as Legere usually refers to them, watched T-Mobile win 8.3 million new customers last year alone. A smile oozes from his asymmetrical mouth. “Yes, that’s in the first minute that I swore,” he flirts with the crowd. He knows they’ll be tweeting his feistiest lines. In fact, he’s counting on it. “Those of you with the f-bomb pool will have to wait a little bit longer,” he quips. (If you had bet that he’d drop one within the first four minutes, you won.)

This performance—to announce new terms for T-Mobile’s business customers—would get most CEOs fired or sued, especially in the buttoned-up telecom industry. Legere, though, gets an ovation when he takes the stage and another when he’s done.

Amid the applause, questions hover: Who the @#$% is John Legere? Why is he presenting himself as an amalgam of faith healer, social media stuntman, professional trash-talker, and drunken boardwalk pitchman? Is he a marketing genius? A bullshit artist? Or both? He has certainly anointed himself the Dr. House of telecom, jamming a syringe full of adrenaline into the heart of the wireless business. As one industry journalist, Dan O’Shea, tells me, “This guy is being treated like he just popped out of a spaceship from nowhere, but everybody has a history.”

Perhaps the most important question is, Why have Legere’s antics worked? Since he first recast T-Mobile as the underdog anti-carrier in the spring of 2013, it has come back from near death. In addition to customer growth, revenues increased 13% year over year in the first quarter of 2015 (though the company continues to lose money), and it is now on par with the incumbent No. 3, Sprint. Virtually every time T-Mobile unleashes a new “un-carrier” move—abolishing contracts and international roaming fees; giving away streaming music; handing out unlimited upgrades for new iPhones; offering to pay off customers’ AT&T contracts if they switch—“the pricks” do their best to match it. Legere is singlehandedly dragging the industry into a new era. Even Verizon’s acquisition of AOL can be seen, in part, as a reaction to T-Mobile’s rising profile.

Camouflaged beneath Legere’s profane shtick and age-inappropriate wardrobe is the germ of an alternative, thoroughly modern model for corporate leadership. A generation ago, if a customer knew of a CEO, it was because he projected an avuncular gravitas on TV that helped to sell Chrysler cars or chocolate Frostys. The public today, inherently skeptical and weaned on social media bluntness, no longer trusts a canned talking head. Both customers and employees expect more, a CEO in the maelstrom just like them. Authenticity of the sort Legere projects is what moves merchandise. Even if it’s just an act.

Legere seems to go out of his way to convince people he’s a lunatic. In the middle of my interview with T-Mobile’s straightlaced COO and CTO together at the company’s Bellevue, Washington, headquarters, Legere—as if jacked up on jelly beans—pulls up to the conference room on his custom-designed Segway, which flaunts magenta rimmed wheels (or “mangenta,” as T-Mobile’s all-male executive team refers to the brand’s electric shade of fuchsia). Later, while I talk with another company executive, Legere pops his head into the office, and with a mangenta-hued bullhorn, reenacts the kind of attention-seeking antics that got him thrown out of Catholic school in the small Massachusetts mill town where he grew up, the middle of five kids. “This is taking way too long!” he blasts, banging impatiently on the horn’s button.

When I finally reach his corner office, Legere shows off the paraphernalia that comes with being a CEO-slash-performance artist. He props his feet on his desk, giving me a close-up look at his hot pink Converse high-tops embossed with t-mobile CEO on the side. His feet rest next to a Legere doll, a 10-inch replica of himself that’s been mass-produced and has its own smack-talking Twitter feed. (@LegereDoll has 2,589 followers to @JohnLegere’s 1.3 million.)

This is not what T-Mobile’s conservative German owner Deutsche Telekom was buying when it hired Legere in September 2012. Legere was a suit, a Brooks Brothers catalog model with a slicked-back Gordon Gekko ’do. He had been CEO of fiber-optic networking company Global Crossing—an even bigger dog than T-Mobile when he took it over in 2001. Legere had to declare bankruptcy within months of his appointment and submit to being grilled in congressional hearings. Yet he dug the company out of the mess he inherited, and it was acquired for $3 billion in 2011.

Despite his chops as a turnaround expert, when Legere became CEO of T-Mobile the following year, he felt vulnerable. Most of his career had been in telecom, but wireless was a specialty that he now admits he didn’t understand. His doubt evaporated only after he spent evenings during his first few months on the job listening in on T-Mobile’s customer service calls, a visceral window into the public’s angst. “None of the [technology] mattered,” he tells me, his hand now anchored to a jumbo-size iced coffee, black. “There was this plethora of hatred for this industry and this never-ending list of things people wanted to change. They didn’t want to know what I don’t know. They don’t care!”