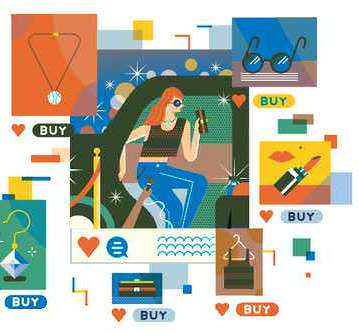 Social networks want shopping to be the next thing we do on their platforms. Are we ready to "heart" the BUY button?

When I moved into my new apartment a year ago, I tried to throw money at Pinterest. I felt too old for Ikea’s Förhöja accessories and blank, asylum-white walls, and embarrassed not to own my own window treatments or know exactly what a duvet was. I needed interior decorating help. I needed Pinterest. Its ever-growing inventory of pictures of bespoke fashion, Etsyesque knickknacks, works of art, and home decor now totals more than 50 billion “pins.” I easily found the styles I wanted for my new place, but when I tried to purchase them, my nightmare began. The reclaimed-wood coffee table I coveted was no longer for sale at the retailer linked to in the pin; neither was the brand. A Google Images search was fruitless. This happened again and again. If Pinterest had let me buy, I would have purchased everything through it. Instead I was frustrated by having to search elsewhere.

This summer, Pinterest began rolling out “buyable pins,” which finally lets customers purchase goods within its social scrapbooking service. Long one of the most requested features, according to the company’s head of commerce, Michael Yamartino, Pinterest’s new pins will soon be competing with BUY buttons from its social media rivals. In mid-June, immediately after Golden State won the NBA championship, the Warriors’ official Twitter account offered its nearly 1 million followers $35 commemorative T-shirts via a BUY button within the tweet. If retweets and favorites are any approximation of sales, then that single post, shared after midnight, moved around $125,000 of merchandise. Instagram has been experimenting with a SHOP NOW button, so Nike can market pictures of its athletes and directly sell the apparel they’re wearing. Facebook, too, has begun toying with a “buy” call-to-action for items that appear in the news feed (think of how many optical illusion dresses or ice buckets Facebook could have sold in the past year). Even Google, despite not having any real social presence, is exploring integrating a “buy” feature into search ads. No wonder Kleiner Perkins partner and analyst Mary Meeker, in her widely read Internet Trends report, recently heralded BUY buttons as the next big thing.