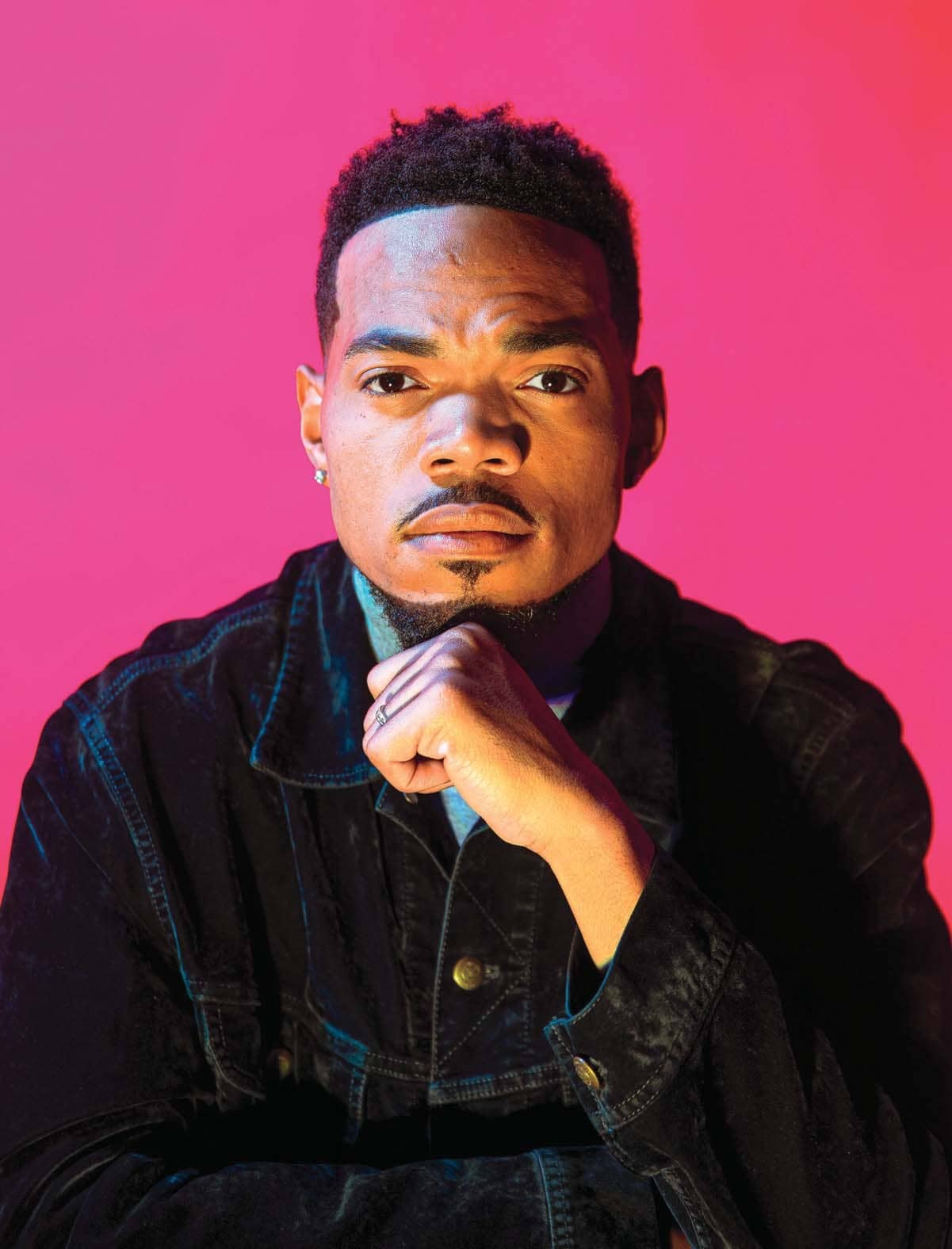 A HIT ALBUM. A WORLD TOUR. AND A FUNDAMENTAL NEED TO PUT OTHER PEOPLE FIRST. RAPPER CHANCELLOR BENNETT REVEALS HOW HE IS ASPIRING TO A DIFFERENT KIND OF PRODUCTIVITY.
By Mark Wilson. Photographs by Mamadi Doumbouya

“YESTERDAY, I LEFT MY WALLET AT HOME,” says Chancelor Bennett, aka Chance the Rapper. It’s 9 p.m. on a fall evening at a Chicago recording studio, and he and his bandmates are packing up for the night.

Four days from now, they will put on their biggest show of the year, at the city’s United Center.

Bennett sits next to me in high-waisted track pants and a fitted tee. He admits to feeling a little overwhelmed by having a new baby at home and a new tour to prepare for, and yesterday was proof. He had taken his 4-year-old daughter, Kensli, to Dunkin’ for a rare treat before school. It was the first day all week that he had been able to do morning drop-off, and he’d wanted it to feel special. She picked out a glistening, sprinkle-topped chocolate doughnut, and he realized his pocket was empty.

“It’s just a crazy letdown for a child,” he says, shaking his head, clearly still unable to forgive himself. Luckily, another customer was more than happy to pick up the tab—in exchange for a photo with Chance the Rapper.

The entire span of 2019, in fact, has been rather frenzied for the 26-year-old, who made the unthinkable choice several years ago to eschew record deals and give his music away for free. He’s garnered more than 1.5 billion streams on SoundCloud since 2012, and he’s earned millions of dollars in revenue, through live shows, merchandise, and endorsements instead. Last winter, he filmed six episodes of Rhythm and Flow, a Netflix talent competition that he hosts alongside Cardi B, T.I., and a slew of R&B royalty, which debuted in October. In March, he celebrated his wedding to longtime girlfriend Kirsten Corley, a childhood behavioral therapist and Kensli’s mother. In July, he released The Big Day, his first official full “album” (previously, he had released three “mixtapes”—the last of which snatched three Grammys), which became a Billboard No. 2 hit. He made his feature-film debut in July with a cameo in Disney’s The Lion King remake. In October, he hosted Saturday Night Live for the second time, also serving as musical guest. During all of this, he was also helping to run SocialWorks, the nonprofit he founded in 2016 that works to improve the lives of youth in Chicago through arts education, mental health services, warm-clothing drives, and more. Bennett has donated $2 million of his own money to SocialWorks’ efforts— including $1 million to Chicago Public Schools and $1 million to Chicago mental health initiatives.

In late August, Corley gave birth to the couple’s second daughter, Marli. It was this development that caused Bennett’s already packed schedule to melt down—he felt he couldn’t be a new father and go on tour at the same time. Eleven days after Marli was born, he announced, via Instagram (and a photo of himself with his girls), that he’d be postponing his heavily anticipated, 31-stop North American tour until January.

Yet he kept his promise to Chicago. On September 28, he performed a single show for a crowd of tens of thousands, which featured his brother, Taylor, and Chicago native Kanye West. The decibel level in the United Center, home of the Chicago Bulls, reached levels that rivaled the Michael Jordan era. Chicago was simply another loved one whom Bennett couldn’t disappoint. As he says himself on his 2018 track “I Might Need Security”: “I’m a sign to my city like the Bat-Signal.”

Chicago is a city segregated by a river, which slices it horizontally. Head north, past the old money of Lincoln Park (where the public schools are highly rated); past the Cubs fans at Wrigley Field (which charges some of the highest ticket prices of any MLB stadium); past Edison Park (statistically one of the safest parts of the city, where a disproportionate number of law enforcement officers hole up at night); past the liberal enclave of Evanston (home of Northwestern University); and you’ll reach affluent, 90% white suburbs.

Head south, past the Loop business district, and you’ll start to understand the place from which Bennett draws his inspiration, both musically and civically: the selective enrollment Jones College Prep (where Bennett went to high school); Harold Washington Library (where he recorded parts of his first mixtape); the White Sox’s Guaranteed Rate Field (which charges among the lowest ticket prices in the MLB, and where Bennett launched SocialWorks while promoting his third mixtape, Coloring Book, in 2016).

Keep going, and you’ll reach Hyde Park (the predominantly black intellectual stomping grounds of the Obamas and also, incidentally, where Bennett, at age 9, first heard a track by Kanye West on the radio, which inspired him to buy College Dropout, the first rap album he ever listened to) and eventually the heart of the South Side, an area most Americans know only as a gun violence caricature.

Abutting this part of Chicago is a middle-class neighborhood called Chatham, where Bennett was born. He is among the fourth generation of Bennetts to have lived on the same block, and his music, friends, family, and Christian faith remain rooted here. It’s for this reason that he runs his business differently from perhaps any major entertainer working today. Bennett has no Hollywood agent or manager on retainer. There’s no slick branding agency or publicity firm out there procuring megadeals. His music and social good operations are purposefully intertwined, in an organic way that eschews org charts. “We really are a mom-and-pop-type shop. We just operate on a large scale,” says Colleen Mares, his day-to-day manager, who booked one of Bennett’s earliest shows, in 2013.

One team member happens to be Bennett’s actual pop. Ken Bennett is a veteran of the Chicago political world who served two mayors and helped organize Barack Obama’s unsuccessful 2000 congressional race, along with his history-making 2008 presidential run. Ken is now a board member at SocialWorks and treats his son’s career like that of a political candidate’s. He found Bennett his primary career manager, Pat Corcoran, who’d been working with some South Side rappers, in 2013.