Beyond Roommates - Apartments For Startups 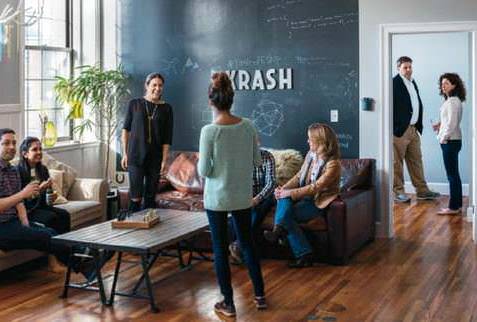 Krash and other startups take the coworking phenomenon to its logical, intimate extreme.

Phil Fremont-Smith spent the summer of 2011 flying between Boston, where he lives with his wife, Jennifer, and San Francisco, where he was trying to raise money for a financials startup. An experienced entrepreneur, he’d schedule his networking dates down to the minute. But after one particularly productive trip, he felt an existential pang. “I was looking at the notes I had written on the backs of business cards and realized that none of the 25 people I had met with really knew me,” he says. A handshake over a cup of coffee wasn’t the kind of investor relationship he wanted to cultivate. He wanted something real—but still professional. “Something leverage able,” he says. “Something that really meant something.”

The following year, Fremont-Smith joined the Tech Stars accelerator to help grow his business. The program required that founders relocate to Boston, but few of them had places to stay. Fremont-Smith saw an opportunity. He and Jennifer, herself an experienced entrepreneur, already had a history of buying, renting, and selling vacation homes in Maine. They leased a six-bedroom house in nearby Cambridge, Massachusetts, and put an ad on Craigslist inviting people to apply for a room in their “cohousing” space, which they decided to call Crash Pad. “Members brainstorm, practice pitches, and collaborate on projects as they live, cook, socialize, or just hang out at Crash Pad,” the ad said. “Mentors, investors, and supporters drop by for impromptu happy hours.”