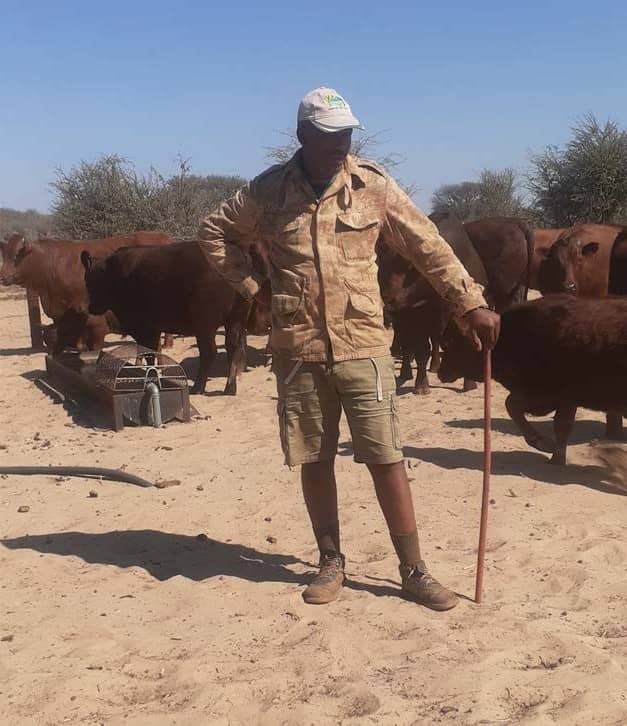 Kgomotso Bantsho has been farming Bonsmara cattle and goats full-time in North West since 2017. He says that support from other farmers is critical, and that each farmer needs to learn which management practices will work best for him or her.

Kgomotso Bantsho, a cattle farmer in Vorstershoop in North West, says his aim is to produce weaners with heavy carcass weights within the shortest period possible

He does this through careful selection for proven genetics and by placing emphasis on using top bulls.

Bantsho first started farming as a hobby in 2011 when he bought goats from his late father, who had decided at the time to retire from being a part-time smallholder.

In 2017, Bantsho left his job as a supply chain manager and started farming full-time. “After I bought my father’s goat farming business I continued to work and employed a farm manager to take care of the piece of veld near Morokweng, situated on communal land, which I inherited from my father,” says Bantsho. He says that by continuing to work at his previous job while building up his farming business, he was able to invest some of his salary in setting up the farm.

In 2013, he started buying in cattle. He took out a personal loan and bought five cows and one bull from cattle farmer Willie van der Merwe in Vryburg.

“With every opportunity of excess cash from the sale of weaners, augmented by my salary, I kept buying about three head of cattle a year, until I decided to leave my job.”

Shortly after embarking on his full-time farming venture, Bantsho applied for access to a state-owned farm through the then Department of Agriculture, Forestry and Fisheries’ land reform programme.

His application was approved in 2018, and he received a 30-year lease for about 1 298ha of land near Vorstershoop on which he runs about 130 cattle.

The farm is divided into eight camps of 163ha each. There is one water point for every four camps.

“Since I started farming here, I have constructed a cattle handling facility, breeding camps and kraals for the goats.”

One of the challenges he has faced, says Bantsho, is access to electricity.