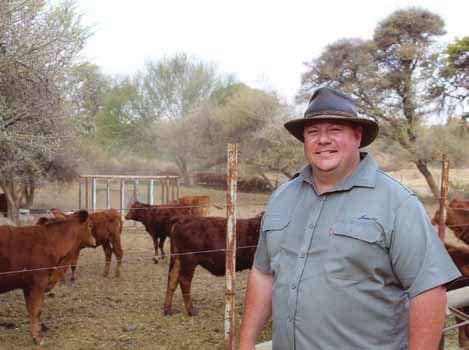 It took Hilton Megaw by surprise when he was nominated as Agri Northern Cape’s Young Farmer of the Year. Hilton, who produces maize, wheat, peanuts, cotton, wheat and cattle, was subsequently crowned as the 2019 Young Irrigation Farmer of the Year and overall runner-up.
Koos Du Pisanie

“My first thought when I received the award was that I am neither a mega farmer, nor have I caused any agricultural upheaval. Most of the knowledge applied on my farm is that of other experts. As I am not a trained farmer, I rely on the knowledge of seed and fertiliser sellers because they know a lot more than I do,” he says humbly.

“It is thanks to them that we started experimenting with rotation, cultivars, technology and programmes which allowed us to operate a successful farming enterprise on a relatively small piece of land.”

Where it all began

Hilton is proud to be the fourth generation to farm on Zandbult, a farm of 150 ha. “The land initially belonged to my great-grandfather, who owned a large farm along the Vaal River. Over the years the farm was divided and sections were passed on to the children. Thankfully, 70% of the original farm is still in our family.”

He says neither he nor his father, Garth, had any academic knowledge of farming when they first started their enterprise. Garth was a reporter at the Diamond Fields Advertiser before he began farming in the 1980s. Hilton, who has a degree in sports management, joined his father on the farm 13 years ago.