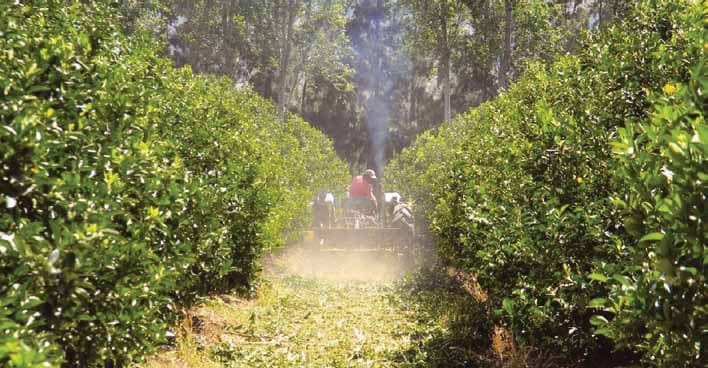 There is no doubt that the notion of thriving citrus orchards would have seemed farfetched to the transport riders who regularly crossed the Great Fish River at Cookhouse in the 1700s and 1800s. Today, citrus cultivation is well established in this region thanks to three friends who decided to venture into citrus production in 1998.
Carin Venter

Brett Wienand, Jock Danckwerts and Chris Louw established their farming enterprise, J&B Citrus, by planting 20ha of clementine trees on a portion of Brett’s land. Their operation steadily expanded and they planted all the usual citrus varieties, including a variety of late mandarin called Nadorcott, which is in huge demand in the European Union and United Kingdom (UK).

Bruce Knott was employed as general manager in 2007, and has been instrumental in the enterprise’s expansion ever since. Today, J&B Citrus has over 300ha planted and aims to plant another 400ha by the end of 2022.

From 2013 to 2017 J&B Citrus acquired two more farms, and a neighbour sold them a further 100ha. Lemons, Nadorcotts and clementines were planted on this additional land. They also recently bought into Burlington Farm, a dairy farm, where they can potentially plant 550ha of citrus.

To date they have concentrated on lemons and late mandarins, but this has resulted in a peak picking season with its resultant labour challenges. To this end, they are planning to introduce Samba, a new mid-season mandarin. “We are actively looking for varieties that will stretch our picking season and fill in the gaps. Samba, which is currently on order, fits into the picking regime and will hopefully be a successful variety,” he says.