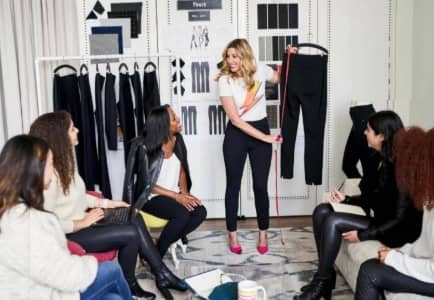 Sara Blakely has steered Spanx through 20 years of ups and downs, including personal devastation and global catastrophe. It has taught her a lot about the value of adversity.

Maybe your article should be titled “What to Do When Your Panties Are on Fire. ha ha”

That’s what Spanx founder Sara Blakely emailed me after we talked. It was March. The pandemic had just begun.

Blakely is famous for a few things: She’s a rare female billionaire, the defining personality in the estimated $1.8 billion global shapewear category, and just about every photo of her features a showstopping smile bright enough to reach the nosebleed section. But she has fallen on that happy face more than once.

“I believe a lot of really important, incredible innovation comes out of dark times,” she tells me. Spanx turns 20 this year, surviving September 11, the 2008 recession, and personal tragedy—and she expects no different now, despite closing her stores, watching sales slump, and losing a line of new product when a cargo ship caught fire. When we speak, she’s working from home, punting four kids under the age of 11 before they tackle her, and boldly reinventing herself and her company once again. “Actually,” she confesses, “I’m hiding in a closet.”

“WHEN I WAS 16,” Blakely says, “my friend was run over and killed by a car in front of me, and my parents separated. I was in a very, very dark place.” Before her father left home, he handed her a cassette series called How to Be a No-Limit Person, by the self-help author Wayne Dyer. “I put the tapes in,” she says, “and they changed my life forever.” She practiced letting go of what other people thought and not worry about being embarrassed; she embraced the idea that the only way to fail was not to try. She learned that times of despair contained hidden blessings. And this, she believes, is what set her up for success.

First, she got a job selling fax machines. It was brutal being kicked out of offices all day, every day. “I knew it wasn’t the right path,” she says. “After a really bad day, I wrote in my journal, ‘I’m going to invent a product I can sell to millions of people that will make them feel good.’ And through tears, I looked up at the ceiling and said, ‘OK, universe; give me the idea.’ ” The universe didn’t deliver quickly; two years passed, and her father suggested that she get a job at CNN or Coca- Cola in Atlanta, where she was living. She said no. “I actually made an intentional decision to stay in a dark place, because I felt that if I became content at a job, it would keep me from an opportunity to achieve something much greater.”

Eventually, she did hit on a brilliant new idea. It was Spanx.

STRATEGY: Stick with your strength