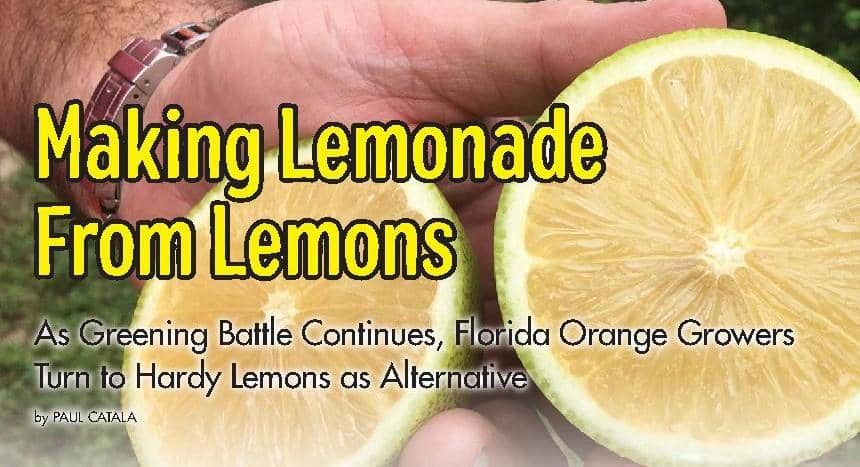 WHEN IT COMES TO FLORIDA CITRUS, naval, valencia and hamlin oranges come to mind while Ruby Red, flame and Thompson grapefruits are common names. But other citrus names are often overlooked: Harvey, Bearss and Eureka, for example.

Those are names of some of the main commercial lemon variety types grown in Florida and more specifically around Central Florida and Polk County.

In 2019, lemons were produced on about 214 acres of groves in Florida. And since 2016, one of those groves has been maintained and cultivated by Dundee lemon grower Joe Garrison.

Garrison, 49, is a lifelong resident of Dundee and is also the owner and founder of Garrison Land Management Inc. of Dundee, specializing in lawn maintenance, landscaping, wells, pest control and other yard care services. He also owns Garrison Property Services, an HOA and condominium management company.

On about 75 acres of lemon and orange trees Garrison owns off Watkins Road in Haines City, approximately 55 acres and 9,000 trees are his Harvey lemons. He says he’s in the process of buying more grove acreage.

Harvey lemons were named for Harvey Smith of Clearwater, who found the lemon on the Clearwater property of George James in the late 1940s. They were entered into the United States Department of Agriculture Citrus ID Program in 1964 and are of “unknown parentage,” according to that program.

The son of Robert and Jewel, both now deceased, Garrison, 49, says his father worked the orange groves of Haines City and Dundee and his mother was employed by Bordo Citrus Products in citrus concentrate. He says he “grew up poor” but was able to learn a lot about the industry from his parents.

“We didn’t have much, but I was very blessed in life,” says Garrison, a 1991 graduate of Haines City High School. “I grew up around citrus and it has always been a dream to have citrus groves. I was blessed enough to have a good business that I was able to have this property.”

Garrison’s first venture in crop cultivation was growing peaches on 10 acres, which he said “didn’t do well.

Standing in the grove garage on a recent September weekday, Garrison explains that in the 1960s and 1970s, cold fronts wiped out a lot of Central and South Florida citrus, but the coldhardy Harvey lemons in Clearwater were able to survive.