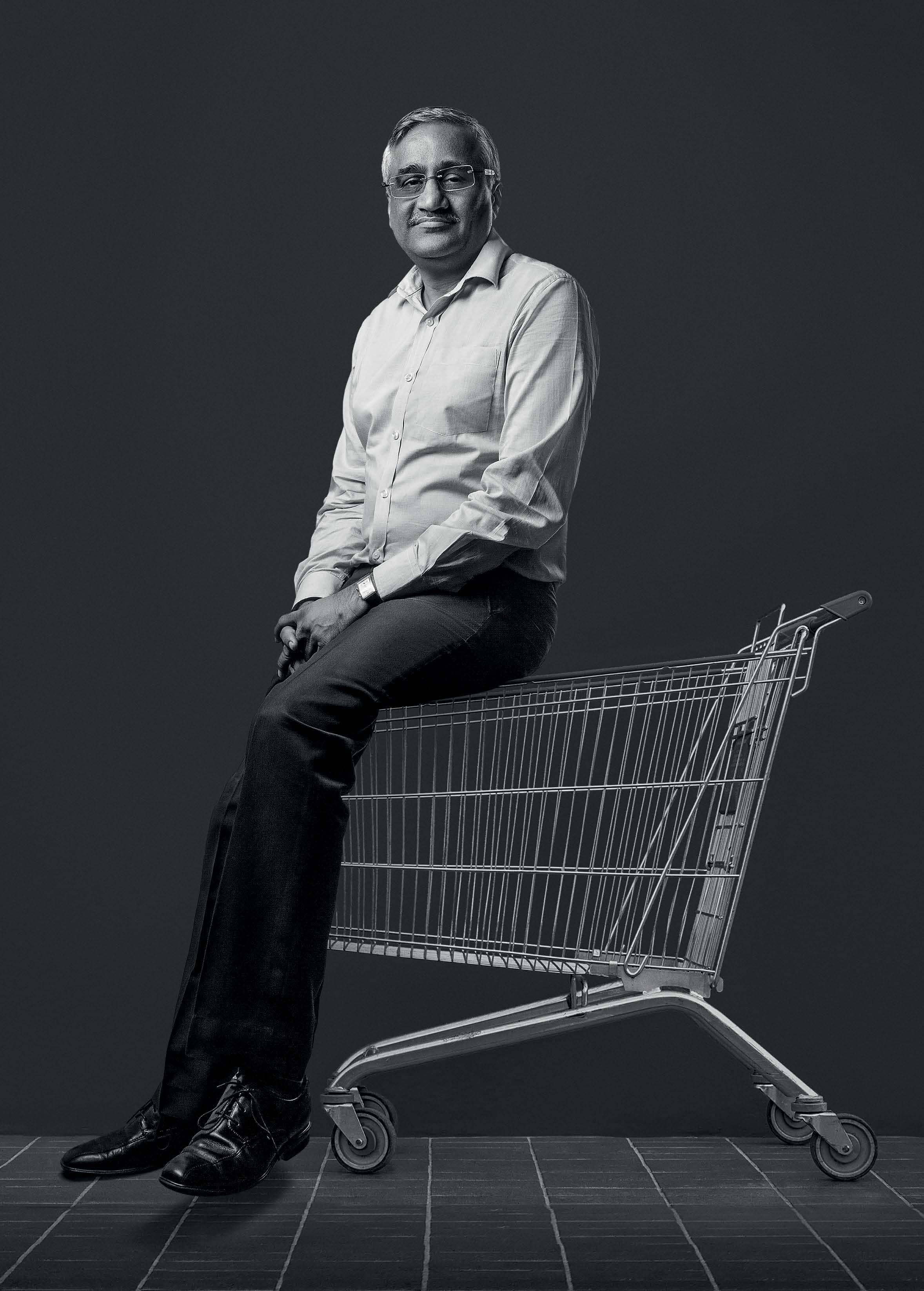 KISHORE IS STARING AT A MAJOR DEBT CRISIS. HERE IS WHY THE OPTIONS GROUP CHAIRMAN ARE LIMITED

AJITH SHASHIDHAR & NEVIN JOHN
Scale has always fascinated Future Group Chairman Kishore Biyani. The bigger, the better. In 2017, when he unveiled his ambitious Retail 3.0 strategy, he articulated his dream of creating a $1 trillion business by 2047. At that time, the world’s biggest retailer Walmart generated $485 billion in revenue, a little less than half of Biyani’s ambition. But Biyani was banking on a modest year-on-year growth of 20 per cent per annum for his then ₹20,000 crore empire.

His recipe for greater scale: service every possible consumer. First with 70,000-1,00,000 sq.ft. big-box retail stores, Big Bazaar. Second, in local areas through 2,000 sq.ft. small-format neighbourhood stores, EasyDay (he targeted 10,000 tech-enabled EasyDay stores by 2020). And third, create an online marketplace where these stores could access Future Group’s entire retail inventory. Alongside, he wanted a consumer play as well. His excitement about the group’s fledgling FMCG business, Future Consumer, was particularly infectious. He dreamt of scaling up the ₹2,000 crore business to ₹20,000 crore by 2021.

Three years down the road, those dreams lie shattered. With profits dipping 11.24 per cent to ₹619 crore in the first nine months of FY20 (it is yet to declare full-year results), the group’s woes came out into the open in the last quarter of FY20. Slowdown and an uncertain future amid lockdowns have crippled his ability to service loans, drowning him in ₹13,000 crore of debt. Biyani is staring at sure-shot bankruptcy.

There is a temporary reprieve, thanks to the loan moratorium and one-year suspension of the Insolvency and Bankruptcy Code(IBC). Had it not been for the coronavirus lockdown, Biyani’s companies would have been facing insolvency. He had a March deadline for repayment of dues. But the Reserve Bank of India’s loan moratorium has provided a breather. In mid-May, the Centre also exempted all Covid-related debt from the definition of default under the IBC and suspended fresh initiation of insolvency for up to a year. In this one-year period, the lenders will not be able to recommend Future Group companies for insolvency, even if they default on loan repayments. Instead, the loans will have to be restructured, by taking out the unsustainable portion.

But the business is already unsustainable and Biyani is on the negotiating table to exit — in full or in part. While Reliance Retail remains the frontrunner, two Amazon-backed consortia of Premji Invest or Samara Capital may also emerge as dark horses. Sources say a deal is likely as early as end of July. One of the plans discussed by negotiators of Reliance Retail and Future Group is a complete share swap. It is not clear how the swap will be designed as Reliance Retail is not listed while Biyani has six listed entities. The deal will lead to Biyani’s exit from the retail business.

This is not the first time Biyani is struggling with debt. Nearly a decade ago, in FY12, he was in an identical ₹12,000 crore debt soup. But he extricated himself by selling his most valuable asset, Pantaloons Retail, to Aditya Birla group for ₹1,600 crore. He also sold Future Capital to Warburg Pincus for ₹ 4,250 crore and his stake in apparel brands BIBA and AND. But this time, the chances of a comeback are dim. “The big difference this time is that we are in a recession globally. He was able to make a comeback in 2012 as market dynamics were strong. This time, he will be lucky if he gets money to just square off the debt,” says the CEO of a leading FMCG company.

Things weren’t so bad till February. The market buzz about his inability to service debt began in mid-February, sending shares of group companies crashing, triggering rating downgrades, even as lenders sought more shares as collateral against loans to Biyani. Between mid-February and the first week of April, shares of Future Retail fell by 83 per cent, Future Lifestyle by 75 per cent and Future Enterprise by 65 per cent. The market cap of all group companies crashed around 75 per cent from ₹33,365 crore on February 1 to ₹8,354 crore on April 1. This forced Biyani to pledge 80-100 per cent of his stakes in group companies. UBS and IDBI Trusteeship tried to invoke the pledge but Biyani got interim relief from the Bombay High Court. The Supreme Court dismissed the Special Leave Petition filed by UBS AG, London Branch, challenging the high court ruling.

With almost all his equity pledged with lenders, Biyani is desperate to find buyers for his business.

While repeated emails to the company didn’t elicit a response, a banker close to the company says when the stock market debacle happened in February, the company had just put together a detailed cost-cutting plan to tide over the crisis. “Kishore had predicted that 2020 would be a tough year globally. He was expecting a recession and was aware that the debt challenge would soon haunt him. Therefore, he decided to shut down any business that was burning cash,” says the banker. The company shut 150 nonperforming stores, started negotiating for lower rentals and began to slash people costs.

The lockdown hit cash flows badly. With liabilities mounting, Biyani had no option but to exit the business completely. He is in talks with Samara Capital and Premji Invest (which has a 6 per cent stake in Future Retail) to sell his most prized possession, the ₹20,185 crore Future Retail (which houses Big Bazaar, FBB and small-store formats (EasyDay, Nilgiris and Heritage).

However, the only way Biyani can get rid of the debt is by selling the entire business. The banker says Biyani is hopeful that Reliance Industries will come to his rescue and give him a good value by end-July. If Reliance does this, it will buy Future Group along with its debt, which means Biyani will have to exit. He may also have to sign a non-compete pact disallowing him from starting a new retail venture. “He is prepared for a complete exit. In fact, he has no choice, he desperately needs cash. Only a larger group-level deal will give him the liquidity he needs,” says the banker.

A senior retail industry expert, who has known Biyani since the late eighties, says if he has a choice, he will never sell to Mukesh Ambani. “When Reliance decided to enter retail in 2007, Biyani and Ambani had met, and the former had invited Ambani to join his business. He opened up every detail of his business but Reliance entered the retail sector on its own. Biyani shared his business model in good faith.”

As Biyani dreamt of building scale, his competitor, Radhakishan Damani, the founder of DMart, preferred doing what he did best – focusing on growing his core grocery retail business. With revenues of ₹15,000 crore, DMart was the most profitable retail company in India in 2017. “We shouldn’t be compared with DMart. They are a low-cost operator, limited SKUs, they do it very well. We are very complex. That’s our specialty, as you can’t be the same,” Biyani had told BT. On the other hand, the big daddy, Reliance Retail, was racing towards the ₹ 1,00,000 crore revenue target. Reliance Retail had the backing of cash-rich RIL.

Biyani’s FMCG (private labels) brands straddled food, personal care and home care. The idea was to find gaps and offer aspirational products that competition didn’t have. He dreamt of challenging global FMCG biggies such as Unilever, P&G, and Nestle on his home turf by offering own brands at compelling prices and reducing the inventory of other FMCG brands. He thought he would get the required scale if he could have a small-format store within a radius of every two kilometers selling essentially his own brands. That’s why he went shopping for small-format stores across the country. He bought EasyDay from Bharti in 2015. Later, he acquired Nilgiris and Heritage in the South and partnered with US-based 7-Eleven, owner of a chain of convenience stores that was looking to enter (the launch is stalled) India. He also planned to sell his brands to kirana stores through cash and carry business Aaadhaar Retail.