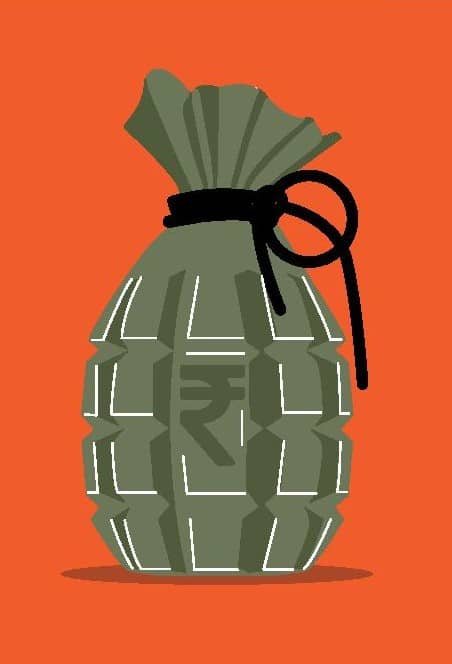 FROM THE NBFC LIQUIDITY CRISIS IN 2018 TO COLLAPSE OF SIX FRANKLIN TEMPLETON SCHEMES, DEBT FUNDS ARE NO LONGER CONSIDERED SAFE

In April 23, US-based Franklin Templeton announced a decision to wind up six debt mutual fund schemes in India owing to the liquidity crisis in the wake of the coronavirus outbreak. The news rattled investor confidence and, on April 28, five days later, credit risk funds witnessed one of the biggest single-day redemptions – the process of selling units – with assets under management (AUM) falling by ₹5,223 crore.

The episode busted the myth surrounding safety of debt funds. A debt fund invests in fixed income instruments such as bonds, corporate debt securities and money market instruments. In fact, credit risk funds (debt funds that mainly invest in low-rated securities giving high returns) saw a 36.53 per cent fall in AUM during April 23-May 20, the latest data released by the Association of Mutual Funds in India (AMFI) shows.

The Reserve Bank of India’s (RBI’s) ₹50,000 crore liquidity window for debt funds to manage redemptions prevented contagion but another shock is likely to aggravate the situation.

We look at some of the most affected debt fund schemes and categories to help you review your investments and take necessary steps.

Initially, Franklin Templeton tried to manage redemption requests by selling good quality paper, but the situation went out of control. “As AUM shrunk, the fund was left with a higher proportion of less liquid and probably riskier investments. It borrowed money to pay for redemptions but hit the regulatory limit for borrowing,” says Prateek Mehta, Co-founder of Scripbox, a mutual fund investment platform. After this, the fund had no choice, but to side-pocket the entire fund.

“If the fund had not been closed, it would have been forced to sell underlying illiquid papers at distress valuations to pay for redemptions. This would have significantly impacted the net asset value (NAV) for existing investors,” says Arun Kumar, Head of Research, FundsIndia.com.

There is also a perception that retail investors usually stay away from debt funds and these are mostly favoured by corporates. However, in some of the debt fund categories, including credit risk funds, there is higher-than-average retail participation. “In general, retail participation in debt funds as a category lags their participation in equity funds by a significant margin. It is only recently that retail investors have started looking at debt funds as an alternative to traditional fixed deposits. Given the history of double-digit returns in some of these (credit risk) funds, the share of retail investors in these might be higher than the industry average,” says Mehta of Scripbox.

However, corporates are the first ones to sense an impending liquidity crisis and take their money out of risky assets. Since information reaches retail investors late, they often end up on the losing side. “I don’t expect majority of companies to be impacted given their strong treasury teams to monitor these risks and their preference for credit quality funds with high AAA ratings and equivalent exposure,” says Kumar of FundsIndia.com.

When there is a systemic liquidity problem, it spreads from one capital market instrument to another. The problem gets aggravated when fear grips the market. This was evident when unprecedented redemption pressure faced by credit risk funds affected other categories as well.