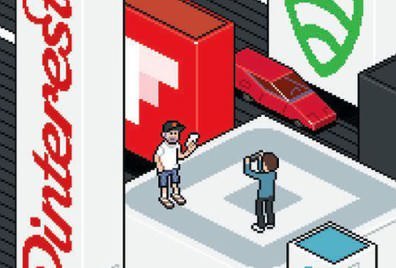 The inside story of how - and why - Goldman Sachs became a tech-investing powerhouse.

They weren't coming just to get wasted says Mel Cavaricci aka DJ Melrecalling the crowd milling in front of his sound table at a party in March.It was at the height of the annual South by Southwest (SXSW) conference, held in Austin, Texas. The event, which started as a music festival, more recently has become famous for propelling the likes of Twitter, Foursquare, Meerkat, and other fast-growing startups. Tech and media companies throw liquor-soaked bashes to celebrate themselves, promote products, and woo hard-to-hire software developers. Music service Spotify hosted a week-long concert series. MRY, a digital marketing firm, hosted a party featuring rapper Busta Rhymes and dancers with big Day-Glo sticks.

This year, Cavaricci had been hired to spin for a company he’d never seen around SXSW before: Goldman Sachs. The party was different from his usual gigs; it was hard for the deejay—a veteran of many SXSW raves—to figure out what to play. “From the looks of the crowd, they didn’t want to hear EDM,” he says. So instead of electronic dance music, he picked oldies. One in particular, Edwin Starr’s 1970s classic Easin’ In, seemed to fit: “There’s a man coming into town ... Like a cat that’s stalking its prey, he don’t wanna let it get away ....”

Goldman Sachs, arguably the most powerful bank in the world, quietly, without fanfare, is making a play to become one of the most influential investors in technology startups. According to research firm CB Insights, the Wall Street bank has participated in 132 fund-raising rounds in private technology companies since 2009, with 77 of those deals made in the past 2½ years alone.

Its activities rival those of the top venture capital firms in Silicon Valley. Goldman has backed Uber Technologies, Pinterest, Dropbox, and 12 other so-called unicorns, that once-rare breed of startup valued at $1 billion or more. Goldman ranks in the top 10 of CB Insights’ unicorn backers—ahead of such Silicon Valley heavyweights as Peter Thiel’s Founders Fund and New Enterprise Associates. And unlike many of Silicon Valley’s top financiers, Goldman’s reach is truly global: It’s in startups ranging from an online pet store in China to a food delivery site headquartered in Germany, to a Korean app developer.

What’s driving Goldman into venture territory? This is where the action (and the big money) is. At last count, there were 119 startups valued at more than $1 billion— almost all created within the past few years. Consider Uber, whose private valuation in just six years has soared from zero to $50 billion based on reports that it’s trying to raise more money.

That kind of skyrocketing growth is hard for Wall Street veterans to resist. Blackstone cofounder Steve Schwarzman, 68, recently confessed that if he were 30 years younger, he’d move to California. “There’s so much disruption and so much amazing value creation,” he said at a conference in late May. Ruth Porat left her post as chief financial officer of Morgan Stanley earlier this year to become Google’s CFO. Sarah Friar, a Goldman alum, is now CFO of Square, the payments company started by Twitter co-founder Jack Dorsey. Ex–Goldman banker Anthony Noto is Twitter’s CFO.

Wall Street used to wait for startups to go public before investing in them. These days, however, entrepreneurs don’t need the public markets like they used to; private capital is plentiful. Uber has raised some $6 billion in equity and debt, and it hasn’t announced any plans to go public. “By the time you IPO as a company with a $60 billion market cap, you are really in the stratosphere,” says Joshua Spencer, manager of T. Rowe Price’s Global Technology Fund. “The opportunity to invest has passed; the explosive growth is often behind them.”

This market moves fast: When Airbnb raised money in April 2014, the company was valued at $10 billion; a year later, that valuation had more than doubled to $25 billion, when it raised another $1.5 billion. Included in the latest round were East Coast investors, most of whom would never have invested at such an early stage in the last tech boom: Fidelity Investments, T. Rowe Price, and Tiger Global Management—all now prolific operators in Silicon Valley.

For Goldman, however, this isn’t just about chasing returns. Startup investing isn’t a game changer for a firm with a $95 billion market cap and $860 billion in total assets on its balance sheet. “The return-on-equity impact isn’t going to be that intense,” says Jeffery Harte, an analyst who covers financial institutions at Sandler O’Neill & Partners. But, he says, “being on the cutting edge of technology has become more important then ever.”

Goldman’s approach to startup finance is complex and expansive, much like Goldman itself. Deals can originate with investment bankers; the securities division, which can make strategic investments; or private banking. While some groups invest client money, others use the firm’s own, and still others provide traditional investment banking services. Goldman’s first deal with Uber, in 2011, was an equity bet; its second, in January, was debt.

Goldman’s venture gambit comes at a time when it is fashionable to chase entrepreneurs and talk up one’s tech savvy. “We are a technology company,” CEO Lloyd Blankfein said in a May podcast on the firm’s website. Blankfein hosted Goldman’s annual shareholders meeting in San Francisco this spring to show the firm is part of the scene. “You better spend a lot of time there,” he said, “and we do.”