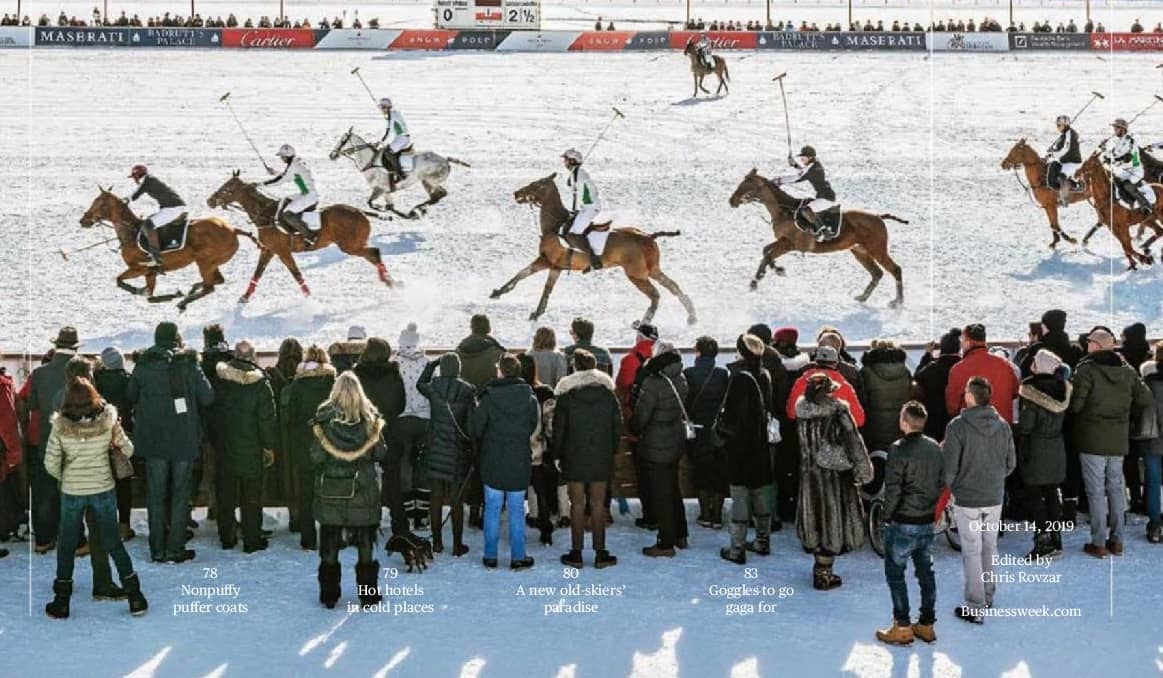 The annual Snow Polo brings the global jet set to St. Moritz for a weekend of sport and swagger.

The hills are alive with the sound of private jets. The aircraft glisten in the sun as they thread their flight path into the Engadin valley toward St. Moritz, flanked by snow-coated slopes. Photographers hoping to score a celebrity shot mill around on the edge of the runway, where a vintage Rolls-Royce and a racing-green Porsche Macan await their masters.

Passengers in cashmere shawls and cascading furs are swiftly reunited with their Gucci weekend bags, then whisked down the hill for one of the glitziest gatherings on Switzerland’s social calendar: the Snow Polo World Cup St. Moritz.

On the last weekend in January, the ski resort becomes the icy diadem of the elite polo circuit. The three-day tournament features four teams of globe-trotting players in white jeans and knee-high leather boots atop artfully groomed horses, chasing a cantaloupe-size red plastic ball across a frozen, snowcovered lake as they swing willowy mallets. Equally impressive is the display on the VIP grandstand: Spectators, who’ve paid 680 Swiss francs ($684) each for a day pass, are stacked eight rows deep, holding glasses of Champagne and puffing on cigars. Not to be outdone, their canine companions also arrive in style: Pugs are pimped out in lacquer-shiny Moncler puffers, papillons peep from Hermès handbags, and dachshunds don cashmere cozies.

The tournament is the brainchild of Reto Gaudenzi, who hatched the outlandish idea in 1983 and has watched the event become so big that it requires military-style planning coupled with renowned Swiss technical know-how. An army of workers spends three weeks setting up the infrastructure on the lake. The horses wear protective braces and special hoof studs for extra grip. The outlay to pull off the extravaganza is about 2.5 million francs for the organizers, and the tournament rakes in more than 12 million francs in additional revenue for the Engadin. “It’s a unique blend of nature, sport, the mountains, parties—you just can’t find this cocktail anywhere else,” Gaudenzi says. “And the moment the bell tolls for the last match, we start working on next year’s event. It’s a huge undertaking.”

This is the only polo competition anywhere in the world played on ice, which in January is about 60 centimeters (24 inches) thick. That’s strong enough to carry almost 3,000 tons of tents, stands, and fences, plus thousands of spectators, who follow the four teams and their bursts of 7½-minute matches, called chukkas. The 100 horses involved are brought in from Spain, France, and the U.K. several days before the matches; they’re cared for in state-of-the-art stables on the banks of the lake.