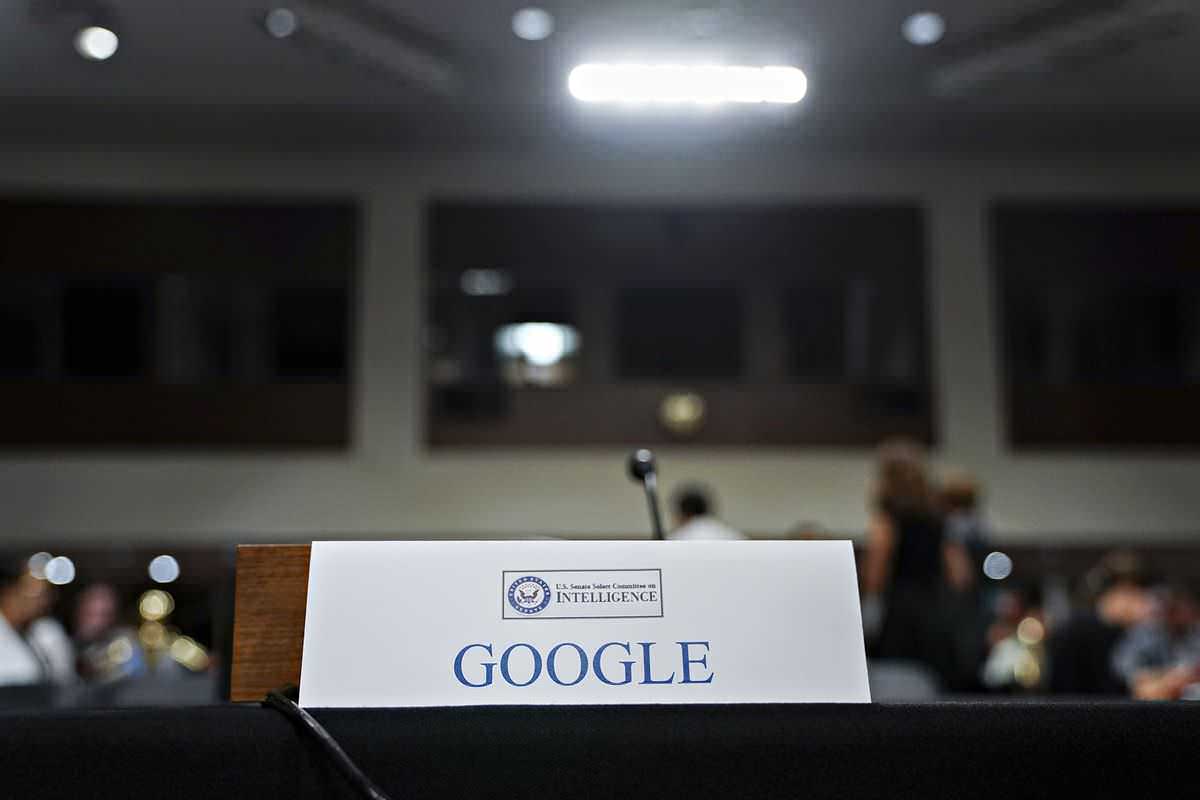 While Google faces existential challenges, Larry Page seems to be exercising his right to be forgotten.

Larry Page was a no-show. The co-founder and de facto leader of Google is famous for his wild bets on airborne taxis and space elevators, but he apparently couldn’t make the flight to Washington, D.C. Page had been called to testify on Capitol Hill, alongside Twitter Chief Executive Officer Jack Dorsey and Facebook Chief Operating Officer Sheryl Sandberg, about the ways state-sponsored actors have exploited their platforms. Page spurned the request. When the hearing before the Senate Intelligence Committee began on Sept. 5, a black leather chair reserved for him sat empty next to Dorsey and Sandberg. A place card marked “Google,” in front of a blank notepad and muted microphone, served as a blunt reminder of his absence. As senator after senator tore into the company for skipping the hearing, they often directed their ire to the void where Page would have sat, with Florida’s Marco Rubio labeling the snub “arrogant” and fellow Republican Susan Collins of Maine calling it an “outrage.” News cameras panned to the unoccupied seat.

Two decades after Page co-founded Google, his company is entering arguably its most perilous phase. Yes, its revenue continues to boom. Yes, self-driving car unit Waymo and all the “other bets”—the eclectic mix of subsidiaries reorganized a few years ago under a new parent, Alphabet Inc.— still have breathing room to hunt for the next blockbuster. It’s the unceasing growth of Google’s flagship properties that’s become its greatest liability. Detractors around the globe are demanding a breakup of its market-ruling search ad business. The European Union fined the company $5.1 billion this summer in an antitrust case over the dominance of Google’s Android mobile operating system. And U.S. lawmakers, given Russian-backed manipulation of Google’s platforms in the 2016 presidential election, are exploring avenues to regulate YouTube. With so many challenges clouding Alphabet’s future, it was more than a little surprising that Page and company left the chair empty at the high-profile hearing. Sundar Pichai, who became head of Google after Page removed himself to run Alphabet, also declined to fill the spot. “I don’t get it,” Senator Mark Warner, a Democrat from Virginia who’s called on Page to answer for Google’s harmful effects, said in an interview with Bloomberg TV. “It’s going to hurt their reputation, not just with the policymakers but with a whole lot of Google users. What do they have to hide?”

It’s not just Washington. Even in Silicon Valley, people have started wondering: Where’s Larry? Page has long been reclusive, a computer scientist who pondered technical problems away from the public eye, preferring to chase moonshots over magazine covers. Unlike founder-CEO peers (Mark Zuckerberg comes to mind), he hasn’t presented at product launches or on earnings calls since 2013, and he hasn’t done press since 2015. He leaves day-to-day decisions to Pichai and a handful of advisers. But a slew of interviews in recent months with colleagues and confidants, most of whom spoke on condition of anonymity because they were worried about retribution from Alphabet, describe Page as an executive who’s more withdrawn than ever, bordering on emeritus, invisible to wide swaths of the company. Supporters contend he’s still engaged, but his immersion in the technology solutions of tomorrow has distracted him from the problems Google faces today. “What I didn’t see in the last year was a strong central voice about how [Google’s] going to operate on these issues that are societal and less technical,” says a longtime executive who recently left the company.