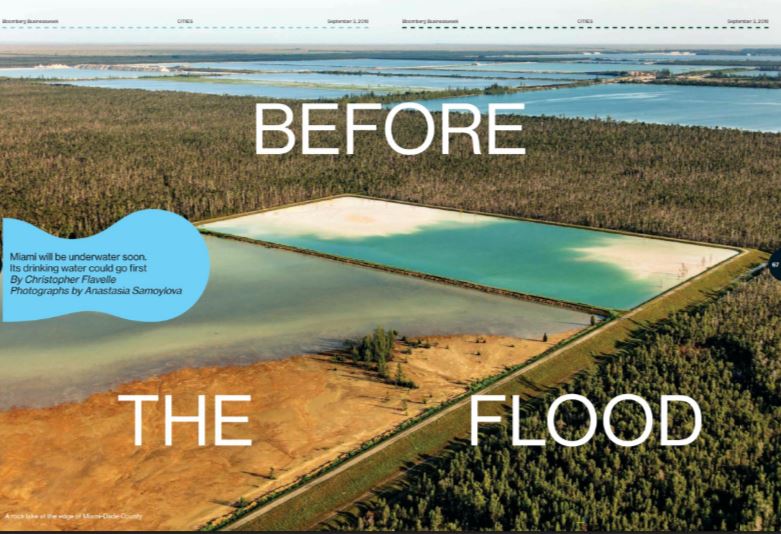 Miami will be underwater soon. Its drinking water could go first

One morning in June, Douglas Yoder climbed into a white government SUV on the edge of Miami and headed northwest, away from the glittering coastline and into the maze of water infrastructure that makes this city possible. He drove past drainage canals that sever backyards and industrial lots, ancient water-treatment plants peeking out from behind rundown bungalows, and immense rectangular pools tracing the outlines of limestone quarries. Finally, he reached a locked gate at the edge of the Everglades. Once through, he pointed out the row of 15 wells that make up the Northwest Wellfield, Miami-Dade County’s clean water source of last resort.

Yoder, 71, is deputy director of the county’s water and sewer department; his job is to think about how to defend the county’s fresh drinking water against the effects of climate change. A large man with an ambling gait, Yoder exudes the calm of somebody who’s lived with bad news for a long time.

“We have a very delicate balance in a highly managed system,” he said in his rumbly voice. “That balance is very likely to get upset by sea-level rise.” What nobody knows is when that will happen, or what happens next.

From ground level, greater Miami looks like any American megacity—a mostly dry expanse of buildings, roads, and lawns, sprinkled with the occasional canal or ornamental lake. But from above, the proportions of water and land are reversed. The glimmering metropolis between Biscayne Bay and the Everglades reveals itself to be a thin lattice of earth and concrete laid across a puddle that never stops forming. Water seeps up through the gravel under construction sites, nibbles at the edges of fresh subdivisions, and shimmers through the cracks and in-between places of the city above it.

Miami-Dade is built on the Biscayne Aquifer, 4,000 square miles of unusually shallow and porous limestone whose tiny air pockets are filled with water from rain and the rivers that run from the swamp to the ocean. The aquifer and the infrastructure that draws from it, cleans its water, and keeps it from overrunning the city combine to form a giant but fragile machine. Without this abundant source of fresh water, made cheap by its proximity to the surface, this hot, remote city could become uninhabitable.

Climate change is slowly pulling that machine apart. Barring a stupendous reversal in greenhouse gas emissions, the rising Atlantic will cover much of Miami by the end of this century. The economic effects will be devastating: Zillow Inc. estimates that six feet of sea-level rise would put a quarter of Miami’s homes underwater, rendering $200 billion of real estate worthless. But global warming poses a more immediate danger: The permeability that makes the aquifer so easily accessible also makes it vulnerable. “It’s very easy to contaminate our aquifer,” says Rachel Silverstein, executive director of Miami Waterkeeper, a local environmental protection group. And the consequences could be sweeping. “Drinking water supply is always an existential question.”

County officials agree with her. “The minute the world thinks your water supply is in danger, you’ve got a problem,” says James Murley, chief resilience officer for Miami-Dade, though he adds that the county’s water system remains “one of the best” in the U.S. The questions hanging over Southeast Florida are how long it can keep its water safe, and at what cost. As the region struggles with more visible climate problems, including increasingly frequent flooding and this summer’s toxic algae blooms, the risks to the aquifer grow, and they’re all the more insidious for being out of sight. If MiamiDade can’t protect its water supply, whether it can handle the other manifestations of climate change won’t matter.

The threats to the Biscayne Aquifer are unfolding simultaneously, but from different directions and at different speeds. In that way, Miami’s predicament is at once unique and typical: Climate change probes a city’s weaknesses much as standing water finds cracks in the foundation of a house.

Twenty minutes east of the Northwest Wellfield sits the Hialeah Water Treatment Plant. With its walls built of coral rock in 1924, Hialeah was Miami’s first major water- processing facility. The water drawn from the Northwest Wellfield is piped here to be cleaned along with water from another cluster of wells that pull from straight beneath the plant. As climate change worsens, this plant will matter more and more.

A few blocks from the Hialeah facility, buried beneath what’s now a maintenance yard for the county’s Metrorail trains, lies a 1.2-acre zone that the Environmental Protection Agency has ranked the second-most hazardous Superfund site in MiamiDade. From 1966 until 1981, the land was used by Miami Drum Services Inc., a company that rinsed containers for an assortment of toxic chemicals, then disposed of the residue on-site.

County and state officials concluded in 1981 that the operations were contaminating the aquifer; the EPA later said the space was leaching arsenic, cyanide, mercury, nickel, lead, cadmium, chromium, chloroform, and oil into the groundwater. The county forced Miami Drum Services to abandon the property and spent two months removing all “visibly contaminated soils.”

Until then, water from the Biscayne Aquifer required minimal treatment: The county would add lime to soften it and chlorine and ammonia to disinfect it, then filter out remaining particles. Once fluoride was added to help prevent tooth decay, the water would be piped to people’s taps. In 1992, in response to the risks posed by toxins from the Miami Drum site and others near it, the county added a new stage at Hialeah, running the water through “air stripping” towers designed to remove toxic contaminants.

In 2014 an EPA report warned that “flooding from more intense and frequent storms” could push toxins from Superfund sites into underground water sources like the Biscayne Aquifer. Anna Michalak, a researcher at the Carnegie Institution for Science in Stanford, Calif., says climate change means U.S. cities are “entering a state that these systems were not built for.” She adds: “As the incoming water quality becomes either worse or just less predictable, you have to have more and more systems in place to deal with all of that.”