Vote-by-Mail Is the Easy Part 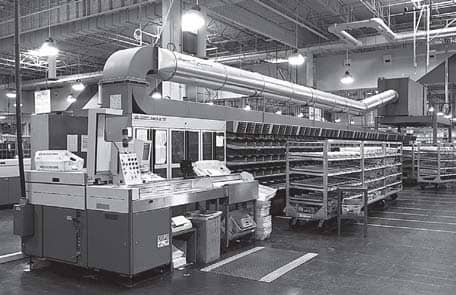 What comes after the election could be wrenching for the USPS

If there’s one thing Kenny Montgomery thought he could always count on, it was the arrival of the U.S. mail. He’d delivered it himself during heat waves and blizzards in Rochester, N.Y. He trudged through the city with a mail sack over his shoulder during the 1991 ice storm that closed businesses and government offices and left residents cowering in their homes without power. They might not have been able to turn on the lights, but they got their mail.

Last month, however, on the morning of Aug. 1, Montgomery, president of the local branch of the National Association of Letter Carriers (NALC), saw his faith shaken. Almost 120 of his members reported to the city’s eight post offices, he says, and found that trucks had brought them packages from processing plants but not a single piece of what he classifies as mail. No letters, no bills, no postcards, greeting cards, magazines, catalogs, or fundraising appeals. “This is my 33rd year of service,” he says. “There are light days, and there are heavy days, but I have never experienced a day where no mail shows up.”

That’s when Montgomery began to fear for the future of the 245-year-old U.S. Postal Service. If this was the service Americans could now expect, why wouldn’t they turn to FedEx Corp., United Parcel Service Inc., or some other private operation that brings things to their doors? “If this continues, we’re going to lose the confidence of our customers,” he says. “It snowballs from there.”

Montgomery says he knows who’s to blame: U.S. Postmaster General Louis DeJoy, a former logistics company executive and financial supporter of President Trump, who took over the agency on June 15. DeJoy has said he wants to transform the Postal Service, which is facing an $11 billion loss this year. Widespread incidents of delayed mail have given rise to theories that DeJoy wants to disrupt the fall election on behalf of the president, who has called the USPS “a joke” and questioned its ability to handle an anticipated surge in voting by mail this fall. So has the Postal Service’s decommissioning of 671 mail-sorting machines across the country and the recent removal of 700 collection boxes. “They were caught red-handed doing this, and the whole country is in an uproar,” U.S. Representative Jamie Raskin, a Democrat from Maryland, said on Aug. 20 at a hearing held by the Congressional Progressive Caucus, a group of liberal Democrats.

Two days later, Democratic Speaker of the House Nancy Pelosi called her chamber back from summer recess to pass a bill to roll back changes that have taken place during DeJoy’s brief tenure. It also contains a $25 billion cash infusion to cover the USPS’s Covid-related losses, a standing House request since the spring. There’s little chance the Republican-controlled Senate will take up the bill, and even if it did, Trump would likely veto it. In yet another attempt to call into question the Postal Service’s competence, he’s argued that without these funds there’s no chance the USPS can handle the expected mountain of postal ballots. “If we don’t make a deal, that means they don’t get the money. That means they can’t have universal mail-in voting,” he told Fox Business on Aug. 13.

This much is certain: The USPS can handle the election. The agency delivers 433 million pieces of mail a day, almost half the world’s volume. The total amount of election mail expected this year will amount to less than 2% of its total flow from mid-September to Election Day. “It’s literally a drop in the bucket,” says Paul Steidler, a senior fellow at the Lexington Institute, a conservative think tank, who studies postal issues.

The removal of mailboxes and sorters isn’t as ominous as it might appear, either. It’s normal procedure for the USPS and a direct response to the collapse of mail volume. Total volume has fallen 33%, to 142 billion pieces annually, since it peaked in 2006. Volume for the service’s most profitable product, first-class mail, has fallen 44%, and the pandemic has only steepened the decline. Meanwhile, with stores closed and so many people at home, package delivery rose 50% from April through June. The Postal Service is struggling to keep up with Christmas-level loads at a time when Covid-19 has sidelined many of its workers.

In short, it might not be the most fortuitous time to make major alterations to the USPS. But that’s not stopping DeJoy. For all the allegations that have been made about him, the truth is simpler. He’s a guy from the business world who’s trying to impose the kind of disruptive changes on a federal agency that might be applauded in the private sector but are guaranteed to provoke a backlash in Washington.

Although the Postal Service is required by law to break even, it’s hardly a business. It was created to help democratize the country by binding it together. Because of this, you can send a letter from anywhere in the country to Alaska for 55¢. As has been noted many times, it might be the greatest bargain on Earth—and one that no private company would offer.

In the name of saving the USPS, DeJoy is mulling changes that not only would affect delivery but could also undermine the service’s mission. Even in the best of times his moves might have eroded public confidence in the agency. Coming now, at a time of intense politicization, with the integrity of the election at stake, they could lead to something worse.

As a business executive committed to showing a federal bureaucracy a thing or two about efficiency, DeJoy isn’t unlike former airline executive Richard Anderson, who put Amtrak on a path to profitability but resigned in April after a little more than two years of battling members of Congress and rail enthusiasts. Or perhaps a better example is Marvin Runyon, aka “Carvin’ Marvin,” a onetime auto industry executive whose tumultuous six-year stint as postmaster general was marked by staff departures, mail screw-ups, and a federal investigation of his involvement in talks to put Coca-Colamachines in post offices when his family held shares in the company.