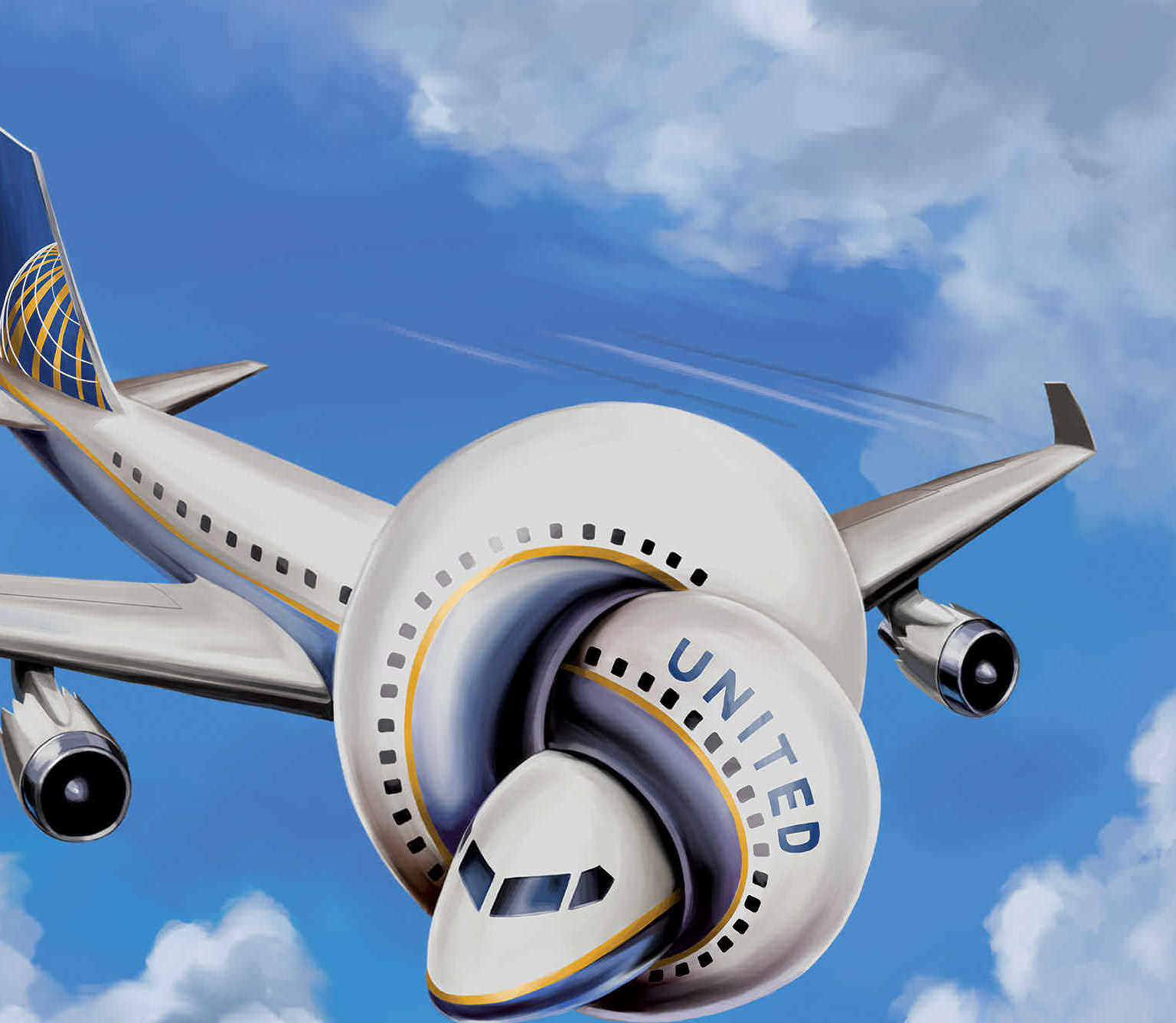 A bungled merger. A corruption scandal. Three CEO's in a year. But hey, at least the snacks are free again.

Early last summer, a team at United Airlines set out to discover what bothered its passengers most. The airline collects 8,000 customer surveys a day, and there was a lot to choose from: Was it extra fees for luggage? The lack of legroom? The sour, thin coffee? Was it being forced to spend 20 hours in a frigid military barracks in Newfoundland (as passengers on a United flight to London did last June)? How about the carrier’s tendency to lose the one bag you really need? (On June 17, 2014, Rory McIlroy tweeted: “Hey @united landed in Dublin yesterday morning from Newark and still no golf clubs... Sort of need them this week.”) Could it be the problems with the reservation system that caused widespread delays in 2012, and again in 2014, or the computer glitch on July 8, 2015, that led the airline to suspend all its flights, all over the world, for two hours? In October, United failed to provide a wheelchair to a passenger with cerebral palsy; he had to crawl off the plane.

Every airline has its horror stories, of course— air travel is full of opportunities for customer disenchantment. But United has proved an industry leader: On all major performance metrics—delays, cancellations, mishandled bags, and bumped passengers—United has, since 2012, been reliably the worst or near worst among its competitors. In 2012, according to the U.S. Department of Transportation, United was responsible for 43 percent of all consumer complaints filed against U.S. airlines. It finished last among North American nondiscount airlines in the 2015 J.D. Power & Associates customer satisfaction survey. Recently the carrier agreed to pay $2.8 million in fines for tarmac delays and the poor treatment of disabled passengers. “United is off-the-charts worse than anything I’ve ever seen,” says Lenny Mendonca, a retired senior partner at McKinsey. Despite having flown more than 3 million miles with the airline, he says, “If I have any other alternative, I will fly someone else.”

It’s been five years since United Airlines and Continental Airlines combined to form what was at the time the world’s largest carrier, and the merger hasn’t gone well. In 2012 and early 2014, when American Airlines Group, Delta Air Lines, and Southwest Airlines reported large, and in some cases, record profits, “the new United” lost money. Earnings calls became an opportunity for then-Chief Executive Officer Jeffery Smisek to apologize. “I know we created some customer disservice because of all the changes we made so quickly, and I apologize for that,” Smisek said in July 2012. “We know we can do better and are taking actions to do just that,” he promised in April 2014.

For the CEO, however, things got worse. Last September,Smisek resigned along with two other top executives as the Department of Justice investigated whether the airline had tried to improperly influence the Port Authority of New York & New Jersey, which operates the region’s major airports. One month later, Smisek’s successor, Oscar Munoz, suffered a heart attack and went on medical leave. On Jan. 6 he had a heart transplant. Although United promises he’ll return “at the end of the first quarter or the beginning of the second quarter of 2016,” no one can deny that a company that had long endured calls for a shake-up has been well and thoroughly shaken in a way that has both complicated and catalyzed its efforts to reintroduce itself to the world.

“We’ve been out front acknowledging that, ‘Hey,it would have been great to get it together before year five,’ ” says Brett Hart, United’s general counsel and interim CEO. But the airline, he insists, is getting it together now: United’s numbers for on-time arrivals, cancellations, and baggage handling in recent months have been the best since the merger. “People see the planes coming in and going out on time,” he says. “Employees’ interactions with customers are different. Our customers’ response to the service is improving. People are saying, ‘You know, this feels like a new day.’ ” The second quarter of 2015 was the airline’s most profitable ever, with $1.3 billion in net income, excluding special items. In the third quarter, it climbed to $1.7 billion.

There have been false dawns before in the long saga of the United and Continental merger—it’s the Zeno’s paradox of mergers, never quite reaching the destination. Despite its record profits, the airline has still struggled to grow—year-over-year, revenue was down 4 percent in the second quarter of 2015 and 2.4 percent in the third. The improvements the airline has made have, in many ways, simply brought it back to where it began. After its “customer experience” team went through the complaints from last summer, it settled on a straightforward problem: the complicated boarding process United put in place in 2013, which it says it has fixed and will update soon. “It’s primed for improvement,” says Vicki Bryan, a transportation analyst at Gimme Credit who’s been particularly critical of United. “But I still see this company very much in limbo.”

Connie Garcia works in customer service for United at Newark Liberty International Airport. Her sister also works there,as does her husband, in facilities management. “It’s sort of a family business for me,” she says. She remembers hearing customers cheering in the terminals on Sept. 8. Curious, she asked around and learned that Smisek was stepping down. Gloria Reid, a flight attendant supervisor, was downstairs in the Newark crew lounge, where she says an impromptu party broke out. “Everybody was very happy,” she says, “extremely happy.”

The events that led to Smisek’s resignation took place a year after he became CEO of the merged airline. In September 2011, he and two of his senior government affairs executives had dinner with David Samson, the Port Authority chairman, at a Manhattan trattoria called Novita. Smisek was pushing Samson to make hundreds of millions of dollars’ worth of improvements at United’s Port Authority-operated Newark hub. As reported last spring by Bloomberg, Samson asked for a favor in return: He wanted the new United to restore a discontinued Continental flight from Newark to Columbia, S.C., a short drive from a vacation house Samson and his wife owned.