UFC has become the first major sport back during the pandemic, while defending itself against a groundbreaking antitrust suit that alleges it abused its market power to hold down fighters’ share of its revenue

Josh Eidelson
To make it to the press conference after his first Ultimate Fighting Championship win, Cung Le needed a wheelchair. The cut above his eye required stitches, and he’d bruised a foot so badly kicking his opponent in the head that he was worried it was broken. As he made his way to his microphone on crutches, he recalls, he already knew his boss was pissed that he looked so hurt. When Dana White, president of the mixed martial arts promoter, saw Le wheeling to the press conference, Le remembers him saying, “What the f---?”

The event that night had drawn 15,000 people to Las Vegas’s MGM Grand Garden Arena, with 900,000 pay-per-view customers watching at home. When a reporter asked Le, who’d won a unanimous decision in one of the main undercard bouts, what he’d do next, the 40-year-old middleweight said he wasn’t sure. In his mind, he says, he was thinking mostly about tending to his throbbing foot. White, whose company had recently acquired the rival promoter Le previously fought under, jumped in with a different response: “What he meant was, ‘I’m going to go back, get back in the gym, and I’d love to fight in China.’ I’m translating for Cung.” The crowd laughed.

Le, who’d arrived in the U.S. as a child refugee from Vietnam—and learned martial arts to defend himself against bullies—managed an awkward smile. Then he did his best to repeat White’s words (“I’m going to go back in the gym and get ready for China”), even though this was the first he’d heard about it. UFC scheduled Le’s next fight for a few months on, just after the 2012 U.S. presidential election.

A few weeks later, Le told White and Lorenzo Fertitta, one of the billionaire brothers behind UFC, that he didn’t know if his doctor would clear him to fight again so soon. He was still giving people a wide berth to protect his foot. But Le says White put his hand on Le’s shoulder, told Le he knew he was a “company man,” and said he needed to “suck it up.” Seated to either side of Le, White and Fertitta told him to do what it took to get cleared, leaving him with the strong impression that saying no would derail his career. “They said it very nicely,” Le says.

So he took a bunch of painkillers and told his doctor his foot felt fine, even though the pain from stretching made him sweat. The doctor objected because he had a bone bruise, which can take months to recover from, but Le begged to be cleared. While UFC paid a reported $150,000 for the Vegas fight, Le says that after taxes and expenses, including lengthy physical rehab, he couldn’t afford to land on White’s enemies list.

Then as now, fighters had little alternative but to obey UFC, Le says. After the doctor ultimately obliged Le, UFC— whose then-owners would go on to make headlines for buying a $125 million boat, hiring Bruno Mars for a daughter’s $25 million wedding, and importing snow to White’s home in the Las Vegas desert—offered him a ticket to China in coach. Le won that fight in the first round with a one-punch knockout. But a couple years later, in his final, bloody UFC bout, he could tell between rounds how many fingers a doctor was holding up only because his trainer tipped him off with shoulder taps. The match was stopped in the fourth.

UFC contests Le’s account. “If necessary, we will prove in court what Cung Le says is not true,” says attorney William Isaacson. “Dana White never asks an athlete to compete while injured. Normally, the athletes try to hide their injuries so they can compete.”

Many UFC fighters have stories similar to Le’s. Even now, with the Covid-19 pandemic raging, White has often come across as more concerned about the public’s hunger for entertainment than his fighters’ safety. At a moment when pent-up demand for sports has made old footage of Michael Jordan a weekly must-watch for millions, the UFC president delivered 11 bouts on May 9, including two title fights, at the VyStar Veterans Memorial Arena in Jacksonville, Fla., the land that sheltering in place forgot. No spectators were in attendance, just fighters and staff, but the combatants were allowed well within 6 feet of one another, because Governor Ron DeSantis, unlike most of his peers, has declared athletics an essential industry.

On May 2, programming-starved ESPN broadcast an 11-hour block of kinda-sorta-sports including sign spinning, cheese rolling, and cherry-pit spitting. Nascar says it will return without fans in the stands on May 17, the PGA Tour is planning to start-up in June, and Major League Baseball is proposing to return in early July. But UFC was the first big event for the waiting audience of ravenous sports fans. “The fighters are excited to get back in there,” White said in a statement last month. UFC said in an emailed statement that it’s resuming its events safely and responsibly. 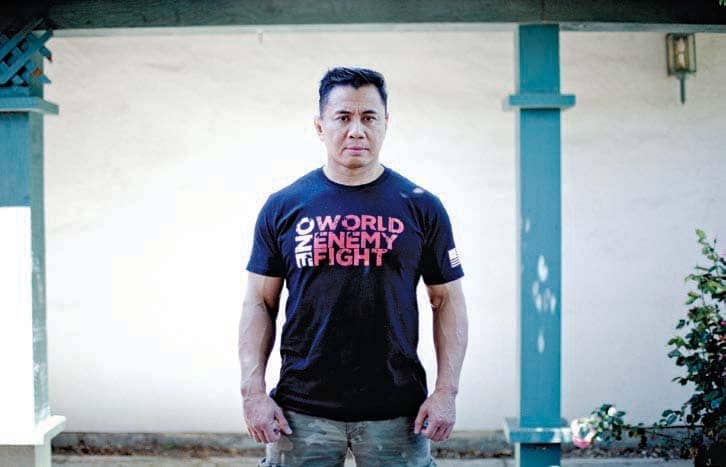 Yet even more so than usual, the fighters will assume an outsize portion of risk in exchange for what have long been far stingier rewards than what many of their pro athlete peers earn. Unlike leagues including the NFL, NBA, and Major League Baseball, all of which pay about half their revenue to players, the share of UFC revenue that goes to fighters hovers at or below 20%, according to a report prepared a few years ago by the media company Endeavor. Brandon Ross, an analyst at researcher LightShed Partners, estimates that UFC’s media rights and sponsorship deals for 2020 were worth around $750 million, though that may be contingent on the promoter actually staging the fights it’s promised broadcasters. For one of its roughly 600 fighters (500 men and 100 women), a televised bout can gross as little as $13,500, before taxes and their many medical and training expenses.

Le says that should change. He’s one of a half-dozen former UFC fighters, including a former title contender, behind an audacious $5 billion antitrust lawsuit against Zuffa LLC, the company incorporated to serve as UFC’s parent. The suit, which after five years of legal wrangling could soon be certified as a class action with 1,200 claimants, accuses UFC of leveraging monopoly power against fighters and holding down their pay.

UFC says that it’s the best-paying promoter in MMA and that the lawsuit is baseless and senseless. When companies take risks that pay off as UFC has, they attract competition and “should be encouraged, not villainized,” Isaacson said in an emailed statement. The lawsuit, he said, is “a threat to all companies’ ability to grow and succeed.”

The plaintiffs, and some of the internal documents their lawsuit has unearthed, suggest the opposite: that UFC has relied on predatory tactics to ensure it’s the only real venue for professional fighting men and women and that it’s a very hard place to leave. “There’s no other option,” Le says. “They basically own you.”