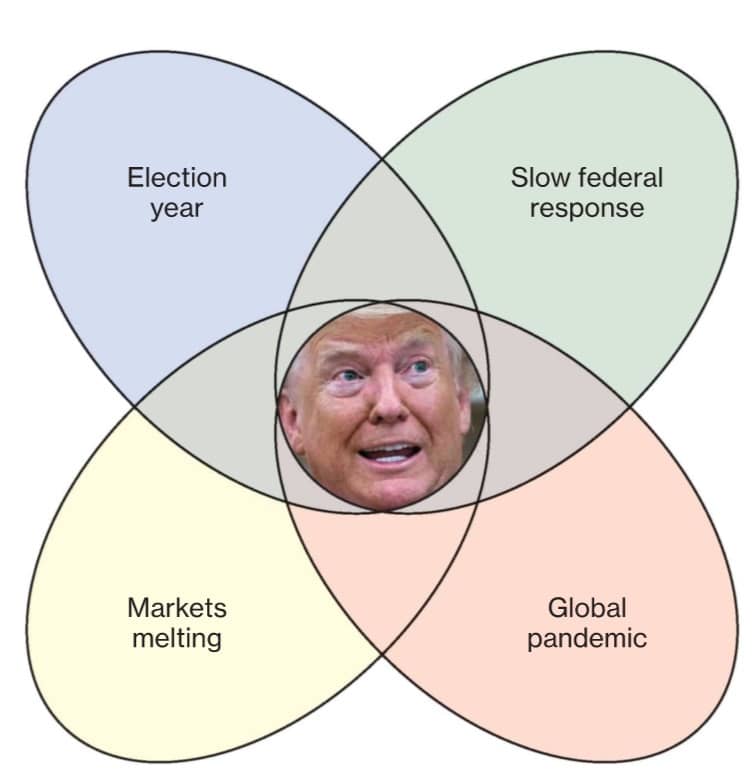 By Joshua Green, with Christopher Condon and Jeff Kearns

As last year drew to a close, President Trump’s reelection prospects had never looked brighter: Impeachment was behind him, unemployment was at historic lows, the stock market seemed to hit a new high every day, and Americans who generally agree on little else felt pretty great about the state of the U.S. economy. Gallup found that 62% rated economic conditions “excellent” or “good,” the most in a decade. Nothing on the horizon indicated cause for worry.

Coronavirus changed that within a matter of weeks. Economic repercussions have traced the path of the virus with astonishing speed, first ravaging financial markets in China, then Europe, and finally the U.S. On Feb. 12 the S&P 500 hit a record high; 30 days later the index had plunged almost 30%, capped off by what was at the time the worst single-day decline since the 1987 “Black Monday” crash.

The timing couldn’t be worse for Trump’s political hopes. Academic research has consistently found that voters judge incumbent presidents based on the state of the economy in an election year—and that their impressions of economic performance solidify over the spring, which means now.

“In my model and most other forecasting models, the election year economy is critical,” says Alan Abramowitz, a political science professor at Emory University whose election model has been among the most accurate. “And the second quarter seems to be what really matters in terms of shaping the outlook of voters heading into the election.”

That bodes ill for Trump. The force and scale of the crisis, exacerbated by the president’s initial denial and slow federal response, paint an ugly picture of the economic effects soon to come. Forecasters are sharply downgrading growth estimates and expect the brunt of the economic damage to land in the second quarter. Goldman Sachs forecasts that U.S. gross domestic product will fall 5% in the second quarter; Pantheon Macroeconomics predicts a 10% drop; and JPMorgan sees a 14% drop.

During a press briefing on March 16, President Trump and his coronavirus task force announced that the Covid-19 pandemic could last for months, and gatherings should be limited to 10 people.

While many also anticipate a bounce back late in the year, a recession now looks unavoidable. A survey of prominent academic economists by the University of Chicago Booth School of Business found that a majority expect a “major recession” as a result of the virus. On March 17, Morgan Stanley and Goldman Sachs declared that a global recession is already under way. “The middle two quarters of this year are going to be very challenging, even if we get the spread of the coronavirus under control quickly,” says Carl Tannenbaum, chief economist at Northern Trust Corp. and a former Federal Reserve staffer.

Although Trump may be a victim of bad timing in having to confront an election year pandemic, his decision to treat coronavirus as a publicrelations emergency, rather than a public health emergency, has expanded the scale of the crisis that’s engulfed his presidency. His early attempts to talk up the stock market by playing down the threat delayed the government’s response. “We have it totally under control,” Trump insisted on Jan. 22. “It’s going to be just fine.”