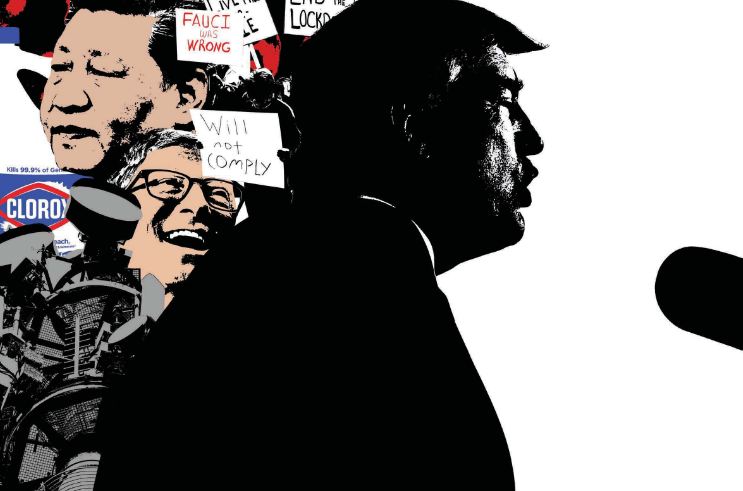 Deep inside the Deep State, a tiny agency is working to stop Covid-19 disinformation. Under Trump, it hasn’t stood a chance

The stories about Bill Gates started circulating in late January, around the time health officials announced the first confirmed case of Covid-19 in the U.S. According to certain—ahem—sources, the novel coronavirus hadn’t come from bats, but from Gates, the billionaire philanthropist and Microsoft Corp. co-founder. It wasn’t entirely clear why he would engineer a global pandemic, but versions of the conspiracy theory pinned it on Gates’s supposed desire to cull Earth’s population, or possibly to surveil it.

Then again, if it wasn’t Bill Gates, maybe it was the U.S. Army that had unleashed the virus, in an effort to undercut a rising China. Or it was created by a Chinese military lab in Wuhan. Or it was a consequence of 5G wireless networks, a view that some people in the U.K. took so seriously they went out and destroyed actual 5G towers.

There were also strange ideas about treatments. While doctors widely believed the virus to be untreatable with existing drugs, there were reports of a game-changing therapy that involved drinking industrial bleach—“Miracle Mineral Solution,” proponents called it.

These conspiracy theories circulated widely online as the virus spread, prompting warnings of an “infodemic” from public health officials. In late February, a little-known division of the U.S. State Department, the Global Engagement Center, or GEC, said the Russian government had pushed the Gates rumor. On May 8, the GEC said it had identified a network of fake Twitter accounts being used to spread disinformation, this time on behalf of China.

The GEC—pronounced “geck” in bureaucratese—is the federal agency responsible for fighting online propaganda from foreign actors. Created in the waning weeks of the Obama administration, it is, as Ohio Republican Senator Rob Portman has put it, the “central nexus of our work to create this effective shield against the falsehoods that threaten the integrity of our democracy—and other democracies.”

The consensus view in Washington is that the GEC, which employs just 120 of the State Department’s 75,000 staff, hasn’t accomplished much. But Portman and other supporters believe it turned a corner in 2019 with the appointment of Lea Gabrielle, who has the kind of résumé that plays well in the Trump White House. She’s a former intelligence officer and Navy pilot who was until recently a full-time correspondent for Fox News. Even so, Covid-19 represents a monumental challenge for her. It’s one thing for an online campaign to influence an election, still another for it to convince people a deadly virus can be treated with bleach.

Since she took over, the GEC has undergone something of a turnaround, persuading an administration that once seemed hostile to its existence to propose doubling its budget, to $138 million, for the coming year. A lack of funds, Gabrielle says, “could have crippled our ability to execute our mission.”

It remains to be seen whether Democrats will go along with the budget request, and there have been questions about the quality of the GEC’s work. Facebook Inc. and Twitter Inc. have said the office didn’t provide enough information to assess its claims of Russian manipulation in February, and Twitter says that many of the accounts the GEC flagged in May actually belonged to Western governments or journalists and were often expressing opposition to Chinese messaging.