The Middle East's Mission To Mars 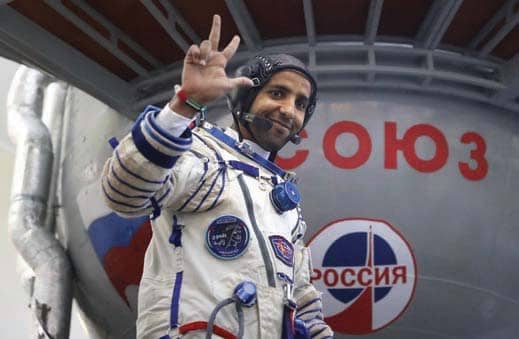 As space gets cheaper and more accessible, new countries are drawing our gaze to the heavens—and away from their controversies on Earth

On the afternoon of Sept. 25 last year, Hazza Al Mansouri walked a gantlet of camera phone-wielding wellwishers at Kazakhstan’s Baikonur Cosmodrome. In a step to his left were Russian commander Oleg Skripochka, a veteran on his third mission, and American flight engineer Jessica Meir, a first-timer like Mansouri. Their white-and-blue Sokol spacesuits made them appear hunched and ungainly, the communication caps covering all but a patch of the face— in Mansouri’s case, dark eyes, a close-cropped beard, and most of a prominent forehead. Ahead of the astronauts were 160 vertical feet of a Soyuz MS-15 spacecraft and the elevator that would take them to its very tip.

Mansouri waved to his wife and three children. They’d said goodbyes earlier that day through the glass of the quarantine complex where astronauts spend two weeks before launch. Not being able to hug had been difficult, given the risks of what Mansouri was about to do. The previous October, a booster for another Soyuz craft, MS-10, had failed a few minutes after liftoff, forcing the crew to eject and parachute back to Earth in a shower of debris.

The MS-15 crew had observed the same superstitious traditions as all the others who’d taken off from Baikonur since the early 1970s: planting saplings on the avenue of trees, autographing their bedroom doors, watching the Soviet action film White Sun of the Desert. As Mansouri walked, he realized he and his crewmates looked just like the astronauts in photos he’d pored over as a child, except this time one of their suits—his—had the United Arab Emirates flag on its arm.

Shortly before 5 they were strapped in and starting prelaunch prep for the six-hour journey to the International Space Station (ISS). A playlist they’d compiled began piping through their headsets—another tradition, begun in 1961 by Yuri Gagarin before he became the first human to go to outer space. Mansouri’s choices included the Swedish-Lebanese singer Maher Zain’s Ummi (Mother), in tribute to his own. As he waited, he tried to focus on his training, his country, and the 64 successful Soyuz launches prior to MS-10.

Night fell, and banks of floodlights lit up the launchpad. At 6:57:43 the first stages ignited. Smoke vented, and the rocket eased from the ground on a great flame. Two miles up, the strap-on boosters exhausted their liquid fuel and fell away. Inside the crew compartment, it was only noise, vibration, and intensifying G-force—topping out, as the craft reached almost 18,000 mph, at four times the astronauts’ body weight. Their breath came only in gasps. It was beyond anything Mansouri had experienced as an F-16 pilot with the Emirati air force.

Roughly 62 miles up, the nose fairing jettisoned, and the crew could see outside. Earth’s curve was stark against the black of space. Mansouri stared and stared until Skripochka interrupted. “Hazza,” he said. “You have your checklist.” There was a huge kick when the third stage stopped firing and fell away, then gravity retreated and blood rushed to their heads. Mansouri and Meir took out their pens and laughed in delight as they floated away.

Down below in Dubai, the most populous of the UAE’s seven emirates, Mansouri’s face was being projected onto the Burj Khalifa, the world’s tallest building. At age 35, he’d become the third Arab to reach orbit and made the UAE the 40th spacefaring nation. As a designated “spaceflight participant,” though, he would stay on board for just eight days, then return aboard a different vessel, the MS-12, with its crew. His trip had been purchased by the UAE from Roscosmos, Russia’s space agency, for an undisclosed sum.

Arrangements like this, along with cost-lowering technological advancements and new commercial ventures, have made space no longer the sole preserve of great powers. Countries as small as the UAE, with a population of just under 10 million, can participate, too, if they have the desire for prestige and the resources to acquire it. Mansouri’s flight was one step in an ambitious national program that’s scheduled to send a probe to Mars between mid-July and mid-August and that has designs on making the UAE a hub for space tourism. The country has moved ahead of neighboring Saudi Arabia to lead a regional jostle that also includes their common rival, Iran.

The two Gulf kingdoms have made space part of far-reaching plans to modernize and diversify their economies. Their moves in this direction, though, haven’t prevented persistent accusations of human-rights abuses at home and criticism of their ongoing involvement in Yemen’s civil war. The question, for many, is whether there’s real substance to the drive for space, or if it’s intended mostly to revise global perceptions.

Saudi Arabia was the first Middle Eastern power to get an astronaut to space. In 1976 it took a leading role in the formation of multi-national satellite communications company Arabsat, which put it in prime position the following decade when NASA’s space shuttle program started launching craft on behalf of private organizations and foreign states. The crew for these missions sometimes included a “payload specialist”—an astronaut not subject to the usual selection and training process. And so, in June 1985, when the Arabsat-1B satellite was scheduled for launch on the Discovery, one seat was allocated to Saudi Arabia.

The spot was filled by Sultan bin Salman bin Abdulaziz Al Saud. At 28 he was one of the youngest astronauts ever, and he lacked the advanced technical or scientific education NASA typically sought. He’d studied mass communications in the U.S., then worked at the Saudi Ministry of Information, where his duties had included accompanying athletes to the 1984 Summer Olympic Games in Los Angeles. He was a pilot, though, albeit a civilian one, and he spoke fluent English. He was also the second son of Salman bin Abdulaziz Al Saud, then governor of Riyadh and now Saudi Arabia’s king.

Sultan’s crewmates were five Americans and another payload specialist, from France. Publicity pictures show Sultan as thin and dashing, with blow-dried hair and a narrow mustache. As the first Muslim bound for space, he faced some unique theological challenges. How could he pray oriented toward Mecca, for example, if he was speeding over the planet at more than 17,000 mph? And the final weeks of training and first three mission days would fall during Ramadan. When should he fast if each 24-hour period contained 16 sunrises? After consulting with a religious scholar, he decided to wake up early during astronaut training for his predawn meal, then carry on as normal. In space, he planned to fast on Florida time and pray facing Earth as best he could.