The High Cost Of Trumpcare 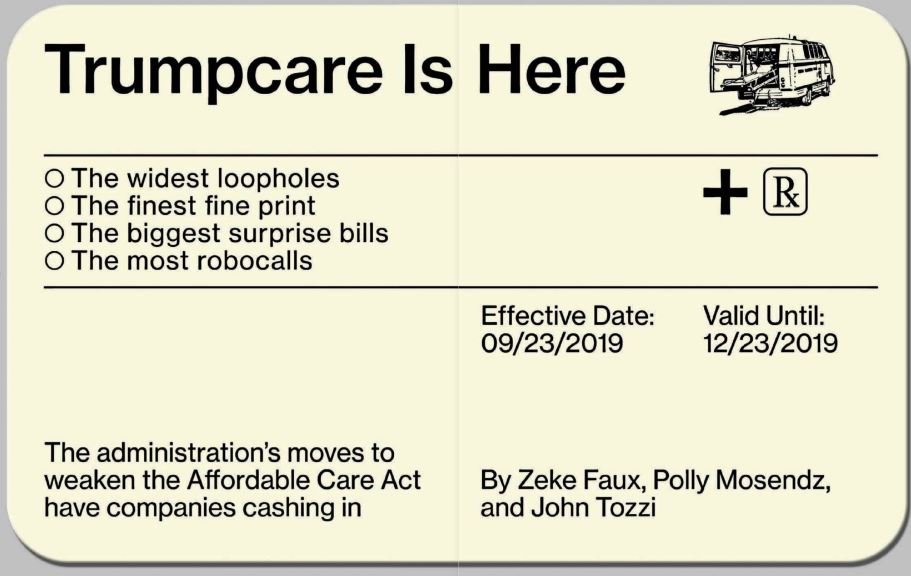 The administration's moves to weaken the Affordable Care Act have companies cashing in.

Early one Friday morning two years ago, David Diaz woke up his wife, Marisia, and told her he didn’t feel right. He asked her to pray with him. Their son called 911, and within minutes, Marisia was tailing an ambulance down the dirt road away from the couple’s house on the outskirts of Phoenix to a hospital in the city. David had had a massive heart attack.

Before being wheeled into surgery, he whispered the PIN for his bank card to Marisia, just in case. But the double-bypass operation was successful, and two weeks later he was discharged.

On her way out, Marisia gave the billing clerk David’s health insurance card. It looked like any other, listing a copay of $30 for doctor visits and $50 for “wellness.” She’d bought the plan a year earlier from a company called Health Insurance Innovations Inc., with the understanding that it would be comprehensive. She hadn’t noticed a phrase near the top of the card, though: “Short-Term Medical Insurance.”

The Diazes’ plan was nothing like the ones consumers have come to expect under the 2010 Affordable Care Act, which bars insurers from capping coverage, canceling it retroactively, or turning away people with preexisting conditions. But the law includes an exemption for short-term plans that serve as a stopgap for people between jobs. The Trump administration, thwarted in its attempts to overturn the ACA, has widened that loophole by stretching the definition of “short-term” from three months to a year, with the option of renewing for as long as three years.

Fewer than 100,000 people had such plans at the end of last year, according to state insurance regulators, but the Trump administration says that number will jump by 600,000 in 2019 as a result of the changes. Some brokers are taking advantage, selling plans so skimpy that they offer no meaningful coverage. And Health Insurance Innovations is at the center of the market. In interviews, lawsuits, and complaints to regulators, dozens of its customers say they were tricked into buying plans they didn’t realize were substandard until they were stuck with surprise bills. The company denies responsibility for any such incidents, saying it’s a technology platform that helps people find affordable policies through reputable agents.

Six months after David’s surgery, the Diaz family got a particularly big surprise bill—an error, Marisia thought when she saw the invoice. But when she called her insurer, she was told she’d have to pay the full amount: $244,447.91.

The ACA was designed around a fundamental eco-nomic bargain: Insurance companies would no longer be allowed to deny coverage to people who were already sick, and policies would have to cover a broad set of benefits, including prescription drugs, maternity care, and hospitalization. In return insurers were guaranteed that consumers would buy coverage or face tax penalties, and that subsidies would be available for people who needed them. The approach spread the financial risk of getting sick and aimed to guarantee that no one with insurance would have to worry about being bankrupted by necessary care. Preserving the bargain was essential, though; too many exceptions, and the edifice would crumble.

When the Republican-controlled Senate failed in 2017 to pass Trump-backed legislation that would have gutted the ACA, the administration instead seized on the loophole allowing consumers to buy certain noncompliant plans. Trump used an executive order to extend the time limit for temporary plans, which he and other Republicans talked up as a potential solution for cash-strapped consumers. Healthy people, they argued, could save money by buying policies that didn’t cover perceived nonessentials. “These plans aren’t for everyone, but they can provide a much more affordable option for millions of the forgotten men and women left out by the current system,” Health and Human Services Secretary Alex Azar said in August 2018.

By then, the ACA system was already wobbling. Aetna Inc. and some other big insurers had been dropping off the state exchanges created for consumers to buy compliant plans, leaving a void that “junk insurers,” as critics tagged them, rushed to fill. A recent study by Sabrina Corlette, a research professor at Georgetown University’s Health Policy Institute, showed that ads for such plans often appeared at the top of internet searches for the government-run marketplaces. Health insurance also became the most common product pitched in robocalls—responsible, according to call- blocking service YouMail, for 387 million calls this April alone.

One company that moved nimbly to capitalize on the uncertainty was Health Insurance Innovations, known by its stock ticker, HIIQ. Founded in Tampa in 2008 by Michael Kosloske, whose father and grandfather both ran health insurance brokerages, the company sought to provide a clearinghouse for brokers who sold cheap insurance to individuals. It worked with insurers to devise a menu of plans, designed software for the brokers, and ran a call center to handle customer service.

After the ACA passed in March 2010, HIIQ continued promoting short-term plans and other limited forms of insurance that didn’t have to comply with the new rules for comprehensive plans. In an interview with Fox News a few years later, Kosloske argued that these policies offered the same benefits at half the cost. “There’s challenges with the Affordable Care Act, and we think our products provide a solution,” he said.

The pitch worked, and Kosloske’s company became one of the biggest players in its niche. When Trump took office, investors saw potential for expansion. HIIQ’s shares tripled within two years of his inauguration, making Kosloske’s stake worth more than $150 million at its September 2018 peak; he lives in one of Tampa’s swankiest mansions and flies around in a Dassault Falcon 2000 jet. The company has also paid its chief executive officer since 2016, Gavin Southwell, at least $14 million in the role. HIIQ now brings in more than $350 million in revenue annually, and it projects that this year will be its most profitable yet.