THE BAD AIR ABOVE MEETS THE VIRUS BELOW 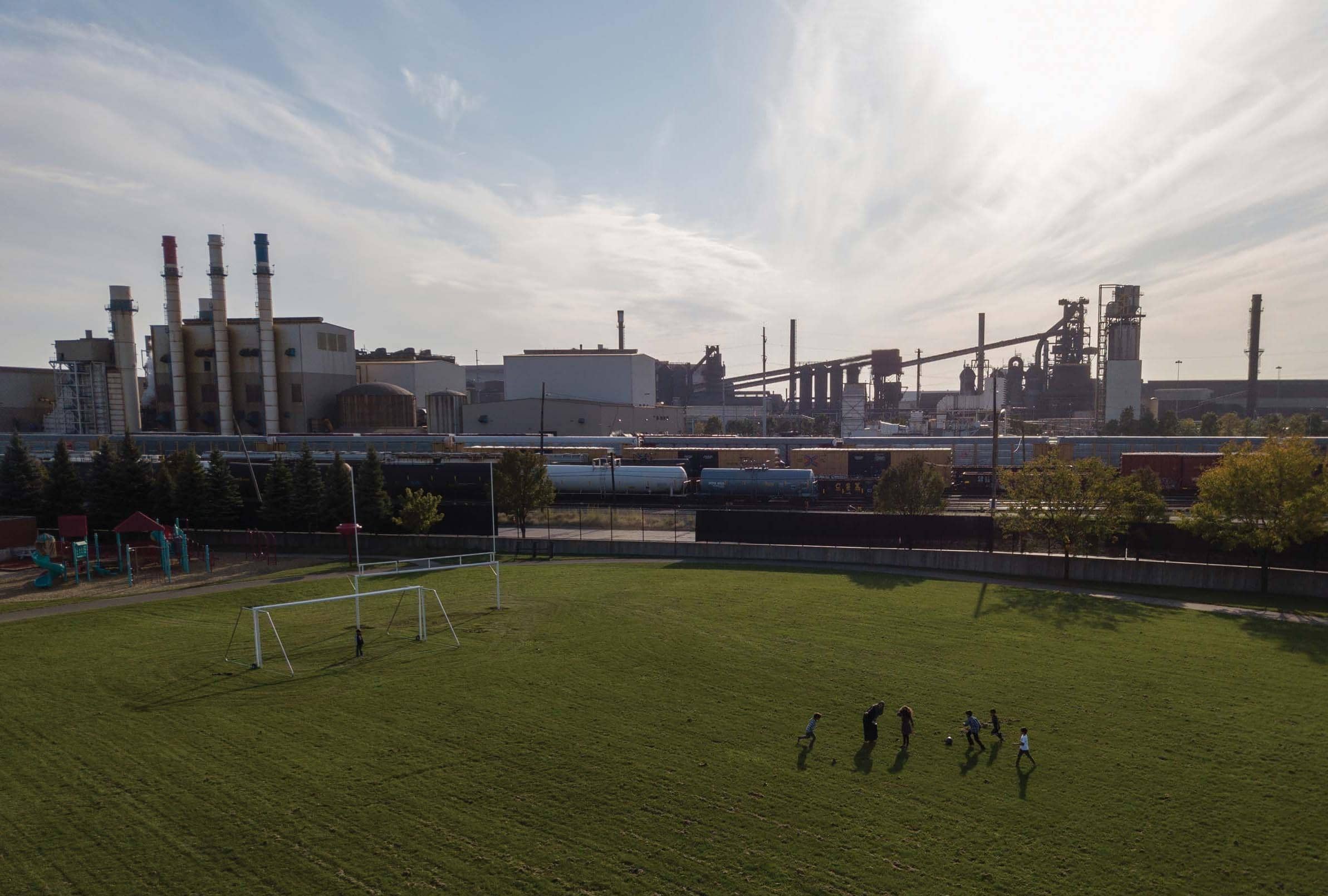 Have decades of industrial buildup around a patch of Southwest Detroit left residents especially vulnerable to Covid-19?

It looked like an ordinary drive-by parade. The kind that people in locked-down states have been holding this year to celebrate births and graduations. Cars rolled slowly down the street, their drivers honking and waving, stopping for brief chats. There were balloons and a banner: Welcome Home.

The July celebration was festive, but it was also a reminder of all the ways Covid-19 had devastated this Southwest Detroit neighborhood. Theresa Landrum was there to salute her niece, Donyelle Hull, who’d won a touch-and-go battle against the virus—doctors at one point told her son to start planning her funeral. Hull, who’s 51, spent 61 days in Beaumont Hospital and an additional 45 days in rehab learning to walk again.

This wasn’t the only welcome-home parade Landrum had been invited to. She counts at least 10 friends and neighbors who’ve recovered from the virus. And she has another list, of those who didn’t make it: a pastor, a state legislator, a neighbor couple who passed away within weeks of each another. “You can’t even grieve,” Landrum says. “You just harden yourself so you don’t get that feeling of hurt.”

She doesn’t think it’s a coincidence that so many people she knows have had severe cases of Covid. She attributes it to something quite obvious: the air they breathe. Her ZIP code, 48217, is one of the most polluted in Michigan. And researchers have begun to confirm that pollution can worsen the effects of the illness. A study out of Harvard, for example, has shown that Covid death rates are higher in populations with more exposure to pollutants, and international research has demonstrated that some of the hardest-hit parts of Europe are in especially polluted areas.

For decades, Black Americans like Landrum, who’s in her 60s and describes herself as a 48217 environmental- justice activist, have fought to limit industrial emissions in their neighborhoods. More than two dozen industrial sites surround hers. People in 48217 live on average seven fewer years than in the country as a whole, and asthma hospitalization rates in the area are more than twice as high as those of Michigan and about five times higher than those of the U.S.

Generations of activists in Southwest Detroit say they’re tired of living under a cloud. They’ve demonstrated, filed petitions, shown up at public hearings, and watched as industry won regulatory victory after regulatory victory. This summer, as the Black Lives Matter protests raged, residents of an overwhelmingly minority Detroit-area neighborhood filed a civil-rights complaint related to the approval of a hazardous-waste storage facility’s ninefold expansion, arguing that pollution is a form of racism, too. 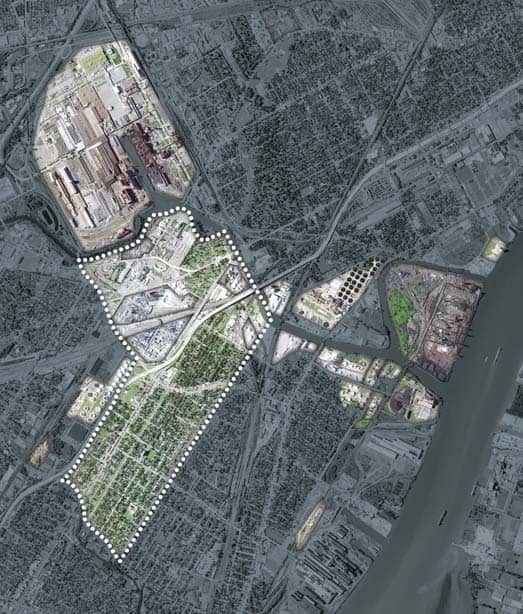 Michelle Martinez, acting executive director of the Michigan Environmental Justice Coalition, says activists have been “screaming for decades” about the consequences of industrial expansion but haven’t been taken seriously. “The pollution and the smokestacks are a form of slow violence.”

A ring of heavy industry encircles Landrum’s neighborhood, a 2-mile-long residential pocket of Southwest Detroit where the median home price is $48,100. Some 80% of the 6,887 residents of 48217 are Black, and 40% of all residents live in poverty. The area is surrounded by mills run by U.S. Steel and the mining company Cleveland-Cliffs, as well as DTE Energy’s River Rouge coal-fired power station, a Great Lakes Water Authority treatment facility, an oil refinery, a drywall manufacturer, a salt pile, a lime quarry, three scrap-metal processors, a chemical plant, four concrete suppliers, an asphalt maker, Ford’s River Rouge production facility, cars spewing exhaust on Interstate 75, and diesel trucks rumbling up and down the streets belching so much dark dust that other drivers sometimes have to pull over because they can’t see the road.

Neighborhoods like this sprung up by design. A century ago, Detroit was a magnet for Black Southerners who were flocking northward for steady jobs in heavy industry. But redlining ensured that only Whites could live in the city’s more desirable neighborhoods, and segregation was enforced with such zeal that in 1941 developers built a half-mile-long, 6-foot-high wall to keep minorities out of a White area. (Sections of the wall remain standing to this day.) Black people settled in Southwest Detroit, in ZIP codes like 48217, in the shadow of Ford Motor Co.’s sprawling manufacturing complex. In its heyday, Ford employed more than 100,000 workers there. Today, the number is 7,500.

Landrum’s father tore down coke ovens for a living. Growing up in 48217, she’d shake off his coveralls in the yard after work, not knowing the dust contained asbestos. She didn’t think there was anything unusual about a sky tinted orange by smoke. And when silver or black fallout from local mills would coat the neighborhood, she and her friends would write “wash your car” on automobile windows. Nobody thought anything of it.

That changed for her in the late 1990s. Landrum was at a hair appointment when she heard a loud boom. No one in the salon flinched. “I said, ‘Wait a minute, did you all hear that?’ They said, ‘It’s been going on awhile.’ ” She and her neighbors were also noticing cracks in the foundations of their homes, sunken spots in their yards, and broken windows. They traced the reason to a lease granted in 1999 by the city to Detroit Salt Co., allowing it to extract salt from 1,500 acres of public property. The process involved the use of explosives some 1,200 feet underground, according to a 2003 Detroit Metro Times article. Landrum and her fellow residents succeeded in forcing the company (which didn’t respond to requests for comment) to reroute its blasts. It was her first foray into the kind of activism that would shape the next decades of her life. 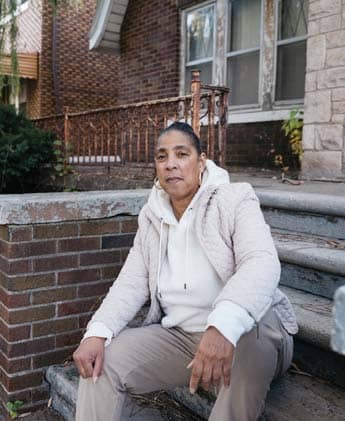