Small Business - A New Look for The Yarn Industry 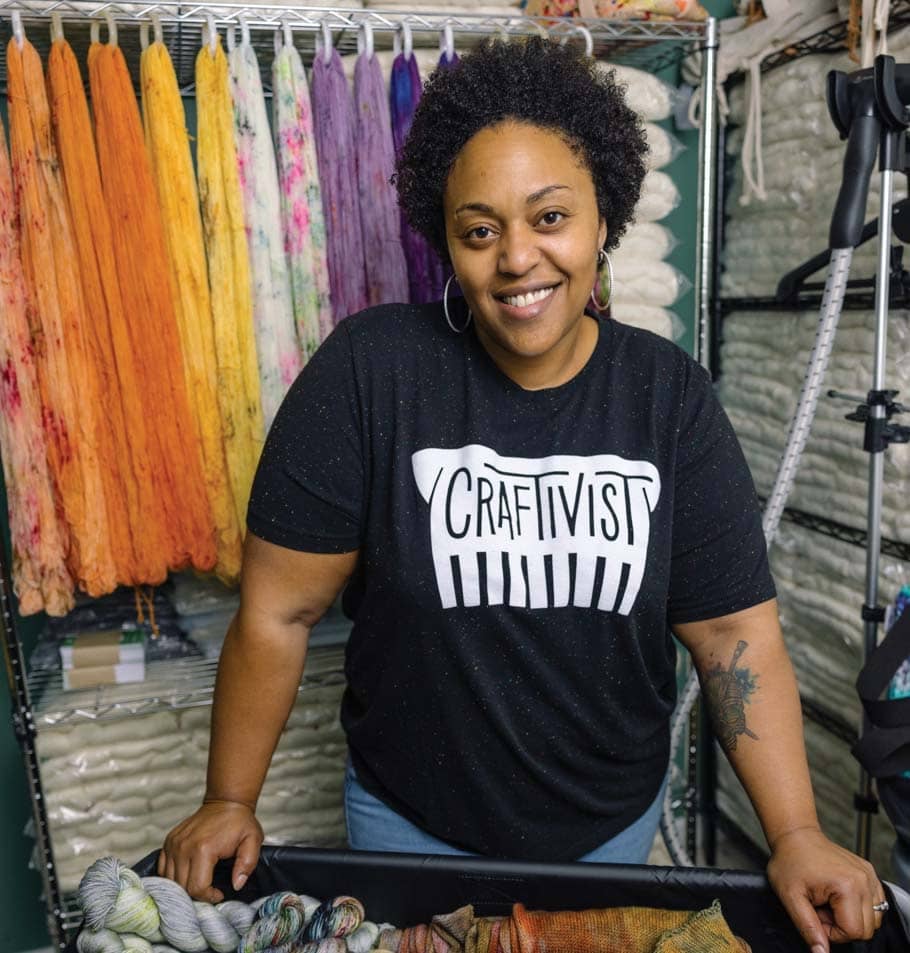 Fresh faces, a culture clash, and the pandemic have turned the knitting world upside down

Adella Colvin was 34, recently married, and living in Georgia when she first visited a yarn shop on her own five years ago. One of her neighbors had suggested knitting as a hobby. Colvin figured she’d give it a try and headed to a shop in South Carolina, about 40 minutes from where she lived.

That experience could easily have become her last. Colvin barely made it past the front door when the owner, an older White woman, stepped in her way. “My bathroom is for customers only,” the proprietor declared.

“She saw a chubby Black woman with an afro knocking on her door,” Colvin says, and that was enough to end the interaction. “My heart shattered.” She turned around and left. Soon after, she decided to buy yarn online, for simple starter projects—hats and scarves. Then she decided to experiment with dyeing her own yarn.

When she wore her dyed wools, there’d always be compliments, women mostly who’d tell Colvin how much they liked the colors. So she opened an Etsy shop, Adella’s Crochet Cottage, in late 2015. “When I started selling,” she says, “I would not show my face. If people see a Black face, they think ‘inferior.”

When her daughter, Lola—nicknamed Bean—was born in June 2016, Colvin started to think about the legacy she was building. She rebranded her business LolaBean Yarn Co. and hired an illustrator to create an image of Bean, with big, bright eyes and unmistakably black skin, as her logo.

Today, Colvin is an in-demand independent dyer whose yarn is sold in shops around the country. Her customers remain mostly White, but she says her demographic has gotten younger and Blacker. Anyone who buys her yarn sees “my baby’s little Black face,” she says. “I can’t tell you how many times I have done a show, and I’ve had Black women walk up to me bawling, ‘I just want to thank you.’ ”

The world of knitting and other fiber arts—embroidery, weaving—conjures images of a grandmother in a rocking chair. But in recent years, the quiet industry of tiny neighborhood yarn shops scattered across the U.S. has become an unlikely cultural battleground. It’s been divided by charges of racism and cultural appropriation that have erupted in a series of social media firestorms, prompting some owners to close, sell, or rebrand their business.

The cultural tension has been set against the backdrop of a global pandemic and an economic crisis that threaten almost everyone in the business who hasn’t mastered e-commerce—meaning almost everyone in the business. Before the crisis, there were 1,500 to 2,000 local yarn shops in the country, producing $750 million in annual revenue. Fewer stores are almost certainly operating today, but there are no hard numbers, because the trade association that used to track them closed this spring after the pandemic forced it to cancel its annual show.

Colvin continues to knock on doors. She got a big break in 2017 when she was introduced to Gaye Glasspie, a Black sales coach from Clifton, N.J., who, with more than 40,000 Instagram followers, is a social media influencer among knitters. Glasspie raised Colvin’s profile overnight with knitters and women business owners across the country. “When she spotlighted me,” Colvin says, “I got more Black customers and followers.”