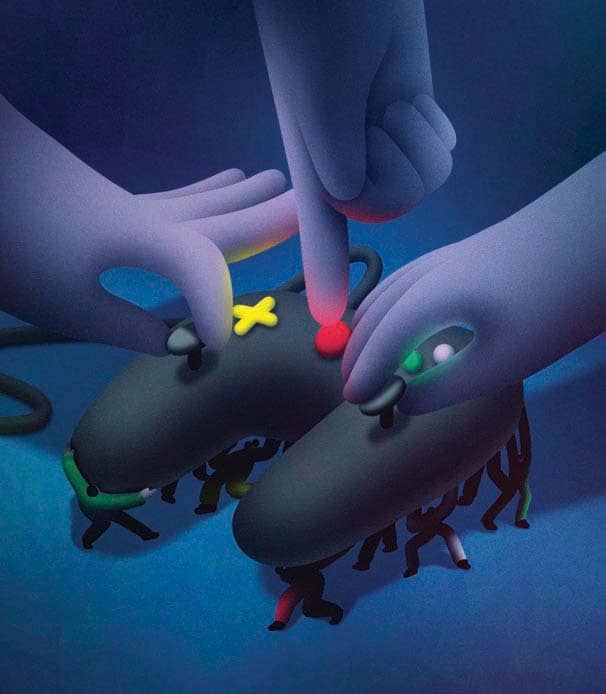 As Christmas 2018 approached, workers at Activision Blizzard Inc. were busy doing what they always do— writing code, modeling characters, and designing landscapes for the next Call of Duty games. At the company’s campus in Santa Monica, Calif., everyone got hand-delivered invitations to the annual holiday bash, where staff could drink, unwind, and celebrate the year. Some recipients, though, were soon told they’d received the invitations by mistake and wouldn’t be welcome at the party, according to three people familiar with the incident. The reason: They were temporary contractors officially employed by a staffing agency, Volt Workforce Solutions.

That treatment isn’t unusual in the gaming industry. While executives rake in millions of dollars and some full-time employees can expect Porschesize bonuses when a hot new title drops, many people working alongside them get nothing but a salary that barely keeps them above the poverty line.

Their employee badges typically come in a different color. They rarely get paid vacations. Their names sometimes aren’t included in the credits. And when full-time co-workers get pricey swag such as statuettes of game characters, they’re often left out. At one studio, a contractor says they were given cheaper, less comfortable chairs. “Temps will be told that there will be opportunities to prove themselves and possibly transition to full time,” says Emma Kinema, a Communications Workers of America organizer seeking to unionize video game makers. “In reality, the vast majority of people in ‘temp’ roles in the game industry get trapped there forever with terrible conditions, no benefits, low pay, and no ladder for career progression.”

The video game industry employs more than 220,000 people worldwide, according to the Entertainment Software Association. These are backed up by thousands of freelancers who write scripts or draw concept art for studios when needed. Somewhere in the middle are contractors employed by agencies such as Volt, Keywords, and Yoh, who work full-time hours but are frequently treated as lesser employees.