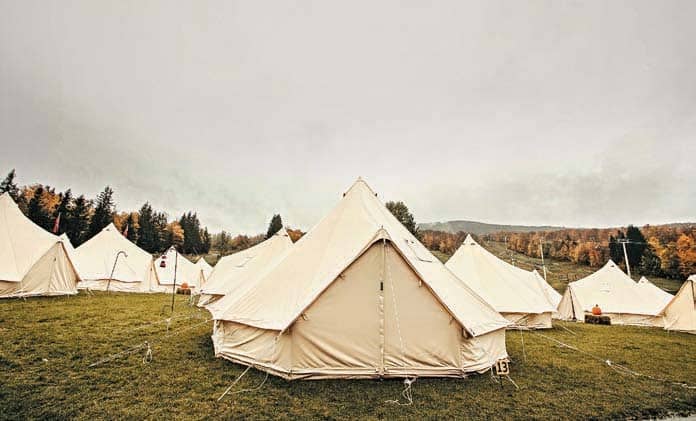 To feel pain is to feel alive. And millionaire life coach Jesse Itzler has a unique method to inflict it.
Anders Melin

The sun is still below the horizon and the temperature barely above freezing when Jesse Itzler gears up to ascend a black diamond ski slope. “We’re going into the clouds!” he exclaims, eyeing the snow-covered summit of Vermont’s Stratton Mountain, which is ominously concealed by dense fog.

Never mind that Itzler, a 51-year-old serial entrepreneur, and former rapper, has enough money in the bank that he never has to work another day in his life, let alone scale a mountain on a chilly October morning. He’s out here anyway, clad in blue shorts, a wind jacket, and a headband, accompanied by roughly 200 others who range from veteran endurance athletes to people for whom exercise is more of a goal than a habit. They’ve all paid about $4,000 for the privilege of joining him.

The challenge: Follow a winding trail up to the summit. Catch the gondola down. Repeat 16 times. That adds up to a little more than 29,029 feet of elevation—the equivalent of Mount Everest, without the altitude sickness and oxygen tanks—spread over 23 miles of trekking.

Over the next 36 hours, which is the time limit to complete this “Everesting” challenge, numerous participants confess that they’ve struggled to explain to family and friends what they’ve gotten themselves into. Lengthy runs or triathlons are known quantities for those who revel in physical exhaustion. Hauling up and down a ski slope isn’t.

This recent “29029” event is the third that’s been held in Vermont. (Another hike took place in Snowbasin, Utah, a few weeks prior, and the team is adding one in Sun Valley, Idaho, in June.) The participants are fairly evenly split between men and women, and the average age is well over 40. Some have a few marathons behind them. But for most, this is a new frontier.

Itzler, meanwhile, has been an endurance runner for decades. In the weeks leading up to Vermont, the father of four completed two races—one 100-miler and one where he lapped a course 17 times for a cumulative 79 miles. “It makes me feel super alive,” he says. “And this allows everyone to have that experience.”

Studies show that endurance sports disproportionately attract people with white-collar jobs and above-average incomes. That’s true here on the mountain. Many are entrepreneurs or corporate managers. One is an executive at Bank of New York Mellon Corp. There’s a Goldman Sachs Group Inc. private wealth manager, a president of an executive search company, a California civil rights attorney.

Part of it comes down to costs and time: Training, equipment, and travel can easily amount to several thousand dollars. (The Vermont climbers have gone through a 20-week pre-climb program overseen by Itzler’s deputies.)