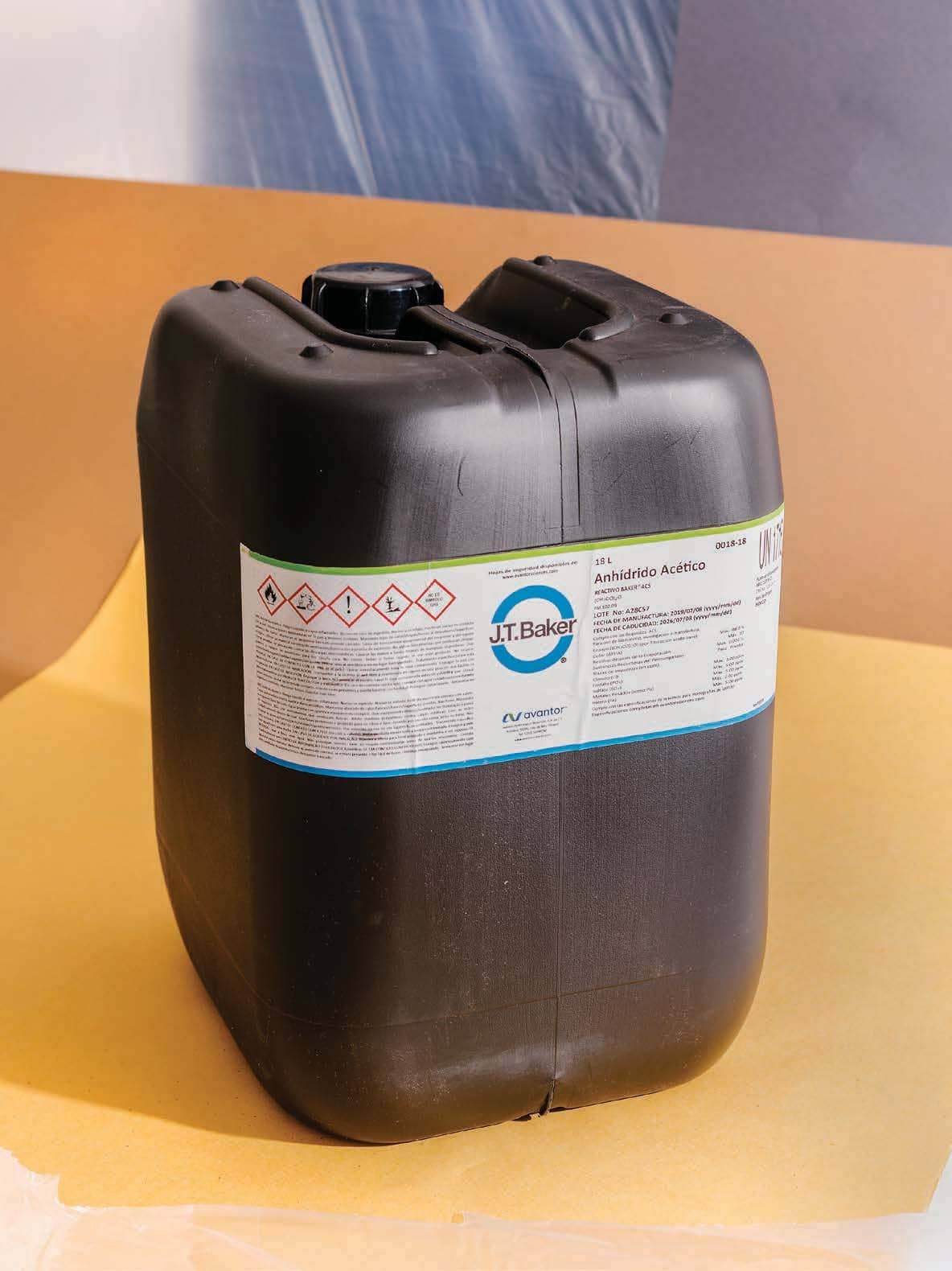 The cartels make heroin and methamphetamine using chemicals produced in Mexico by U.S. companies, and then send the drugs to America

MADE IN MEXICO WITH U.S. INGREDIENTS

Making their way down a narrow country road in the Mexican state of Sinaloa one morning in May 2019, members of a counter-narcotics squad were struck by a strong chemical smell. They pulled over, and a small reconnaissance team climbed out of their vehicles, then stalked down a trail. Behind a thicket of trees, tucked in a clearing, they found an open-air drug factory—not a huge surprise in Sinaloa, the capital of the global narcotics empire built by Joaquín “El Chapo” Guzmán. Five cauldrons for cooking heroin stood exposed to the sky, flaked with rust. In the camp’s makeshift living quarters, bags of tortilla chips and a cooler of unopened Pepsis suggested the cooks had left in haste.

The soldiers discovered the source of the smell: acetic anhydride, a clear liquid that reeks like vinegar. Except for the sap drained from opium flowers, it’s the only thing truly required to make heroin, and it doesn’t take much of the stuff to do the job. Soldiers found some inside four 18-liter jugs that, when full, could have produced 80 pounds of high- quality “China white,” with a U.S. street value of at least $3.6 million.

Acetic anhydride has legal uses in laboratories and factories—the most common use is in the production of cigarette filters. But under international drug laws it’s one of the most strictly controlled “precursor and essential chemicals” for the production of illegal narcotics. For 30 years the U.S. government has aggressively pushed almost every nation in the world to sign on to global treaties and pass domestic laws to keep potential drug-making chemicals away from narcotics syndicates. Acetic anhydride was placed in the highest category of control in 2001. Yet the acetic anhydride seized that morning in Sinaloa was bottled, branded, and sold in Mexico by a $12.3 billion publicly traded U.S. company, Avantor Inc.

During the decade-long U.S. heroin epidemic, Avantor has cultivated a remarkable line of business: selling acetic anhydride across Mexico in containers that are big enough to make lucrative quantities of illegal narcotics but small enough to load into the trunk of a car. Sales come via a network of distributors, online sellers, and stores spread across the country.

Without the right chemicals, it’s impossible for cartels to make two drugs that are plaguing America: heroin and methamphetamine. Avantor is one of a handful of U.S. companies that supply the legal market for those chemicals in Mexico—a market the cartels have had little trouble tapping to make narcotics on a massive scale, a Bloomberg Businessweek investigation has found. Mexico is the source of the vast majority of the heroin and meth sold in the U.S., where more than 142,000 people died from overdoses involving the drugs from 2010 through 2018.

Easy access to drug making chemicals for narcos in Mexico appears to be facilitated, in part, by a lack of outside oversight. International and U.S. drug laws regulate the trade worldwide, but their reach often ends at the Mexican border for local subsidiaries of American companies. International narcotics authorities can interdict sales between nations, but not within them. In the U.S. the companies operate under tough U.S. drug laws, which charge them with ensuring their chemicals aren’t being diverted to make narcotics. If they fail, the U.S. Department of Justice has broad authority to shut down their American operations or charge them criminally. But that oversight doesn’t apply when the companies make and sell those chemicals in Mexico rather than shipping them there from the U.S.

The ability to operate beyond U.S. oversight may never have been more consequential than during a roughly two-year period leading up to August 2016. In that window, the Mexican subsidiary of Dallas-based Celanese Corp. lost tanker trucks of another critical drug-making chemical, mono methylamine, in three separate hijackings, according to sources with detailed knowledge of the thefts. The company acknowledged the hijackings but wouldn’t say how many trucks were lost, or how much of the chemical. Thieves got a total of at least 30,000 liters, the sources say. The thefts have not been previously reported.

Monomethylamine, or MMA, is so vital to methamphetamine production that for a company selling the chemical from U.S. soil, failing to immediately report a supply-chain loss to the Justice Department is a federal crime. Because Celanese made it in Mexico, however, none of that applied, even as executives continued sending tankers out onto Mexico’s bandit-plagued highways. Without publicly disclosing the hijackings, the company ceased Mexican production of MMA in late 2016. By that point, the amount sources said had been lost could have produced at least 60,000 pounds of meth. That’s more than all the meth U.S. border agents seized in 2015 and 2016 combined.

The systematic failure to keep drug making chemicals away from Mexican cartels has many causes. The most surprising one might be the role of American commerce.

In 1874 an English chemist named Charles Alder Wright wanted to make morphine less addictive. He tried boiling it in acetic anhydride, which was used to process flavoring from vanilla beans and would later become critical to making aspirin and cigarette filters. Instead of weakening morphine’s grip, Alder Wright’s process yielded a narcotic several times more potent. Chemists at the German company Bayer AG developed the drug; one who tried it said he felt heroisch, or heroic, so Bayer branded it heroin. The name has never changed, and neither has the chemistry.

“Without acetic anhydride, well, all you have is this crude opium,” says Gildardo Cruz, director of the Mexican attorney general’s forensic chemicals laboratory. He makes his own heroin to study opium seized by the military from poppy fields. “It’s so easy,” Cruz says. “All we need is a little acetic anhydride and a little tub or bucket.” It takes only 2 to 2.5 liters to make a kilogram (2.2 pounds) of China white, and just one liter can yield a kilogram of lower-grade heroin.

Acetic anhydride’s critical role in heroin production has made it one of the top chemical targets of the International Narcotics Control Board, or INCB, the United Nations agency that polices drug-making chemicals. Inside Mexico, however, it’s been effectively unregulated. And heroin isn’t its only yield. Cartels make meth with acetic anhydride, too.

While heroin is made in small tubs and vats, cartel chemists produce meth in industrial superlabs. It’s a purely chemical concoction, involving myriad compounds, and the cartels often tweak their recipes depending on the availability of key ingredients. After U.S. authorities in 2010 choked off the supply of one critical chemical, phenylacetone, or P2P, the cartels started using acetic anhydride, along with other easy-to-get chemicals, to make P2P themselves.

How much acetic anhydride has gone to feed the supply of the two drugs to the U.S.? For heroin, as much as 1.2 million liters, or about 1,300 metric tons, from 2011 through 2018. That’s according to U.S. government estimates of heroin production, drawn in part from poppy crop data. It’s enough to fill a tanker train the length of two and a half football fields. The amount used to make meth is much harder to estimate, but testing and seizure data show that demand has been exponentially greater; 2011 seizures alone suggest at least 1 million liters of acetic anhydride were used for meth just that year.