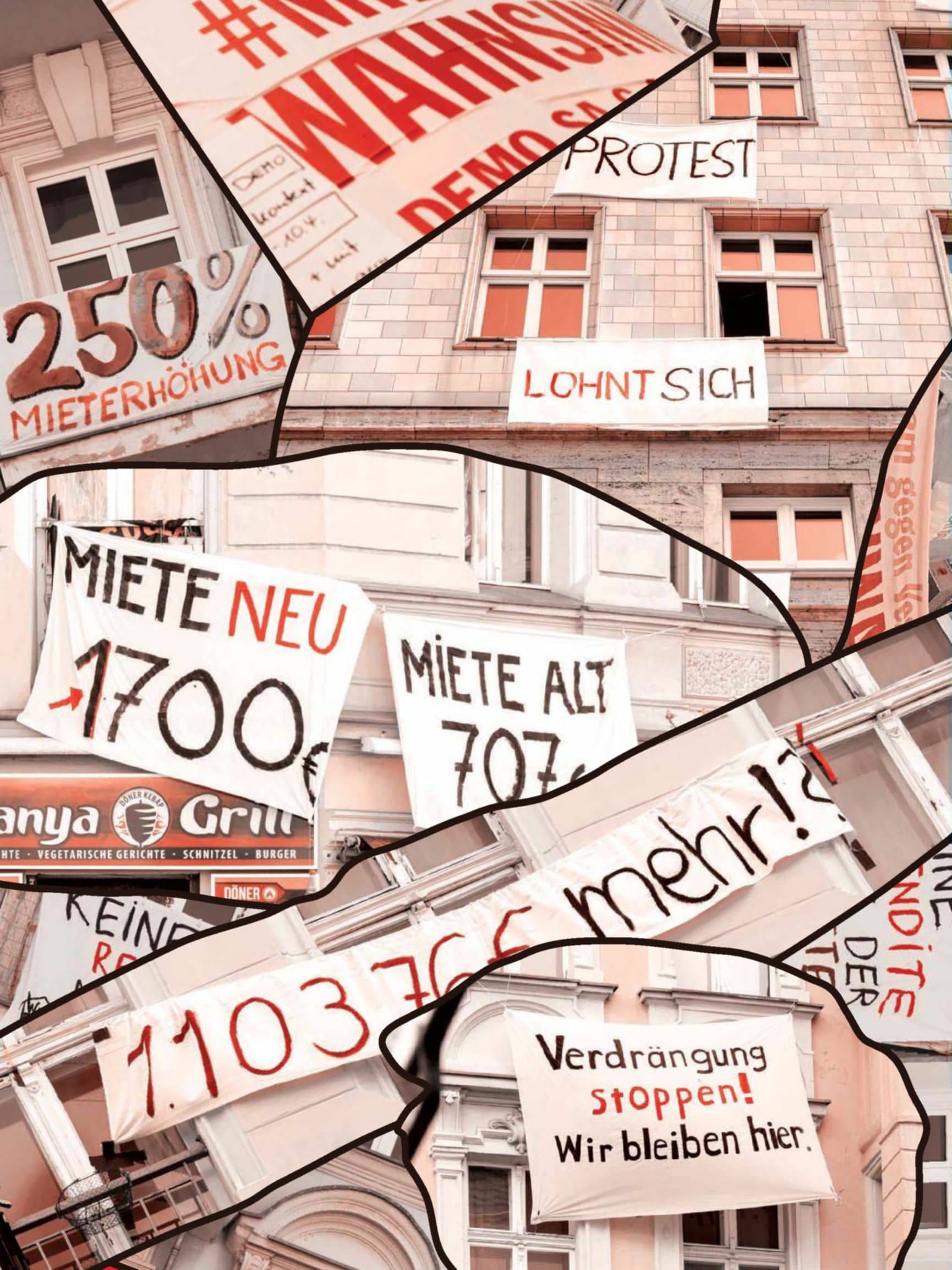 ACTIVISTS SAY THE NEW FIVE-YEAR RENT FREEZE IS MERELY A GOOD START. WHO’S UP FOR EXPROPRIATING SOME PRIVATE PROPERTY? BY CAROLINE WINTER AND ANDREW BLACKMAN

On the ground floor of a tan stucco building in the Schillerkiez neighborhood of Berlin sits an anarchist bar called Syndikat. Its windows are plastered with anti-Nazi and anti-gentrification stickers. Motörhead and German punk bands play on rotation, and a small draft beer costs less than €2.

Since 1985, Syndikat has served as a kind of cigarette-smoke-saturated living room for misfits, students, immigrants, and hard-up neighbors. In September 2018, however, an eviction notice from the bar’s landlord, Firman Properties S.a.r.l., appeared in the mail. That’s when Syndikat’s co-managers took on a surprisingly difficult challenge: finding out who owned their building.

“We’ve had a few owners, but the most recent had an address in Luxembourg,” says Christian Schulte, a 42-year-old sociologist with a septum piercing who’s helped run Syndikat for 13 years. “When we finally found the company’s number, no one ever picked up.”

Wondering exactly who he was dealing with, Schulte enlisted friends near the Luxembourg border to drive to the company’s headquarters. At the address listed on the bar’s lease they found an unremarkable commercial building housing a shoe store and a tanning salon—and an intriguing mailbox. On a sheet of paper posted nearby was a list of 76 companies associated with that mailbox, most of them apparently property management firms. Among them was Syndikat’s landlord.

Schulte and his colleagues scoured the internet and Berlin housing logs and discovered that the companies all shared the same three or four managers. They also found that roughly two dozen of the companies had been used to purchase more than 3,000 apartments throughout Berlin. Luckily for Syndikat, some of the companies were also active in Denmark, where, unlike in Germany and Luxembourg, owners must reveal their true identities. (In 2020, this became true for all European Union countries.)

That’s how, after about two weeks of fact-finding, Schulte’s team identified the actual owners of Firman Properties: Mark, David, and Trevor Pears, three reclusive brothers from London who own a majority of the privately held William Pears Group property company and, according to the Sunday Times Rich List, are worth about $4 billion. “They’re very secretive,” Schulte says. “One of them, you can’t even find photographs.” (Schulte isn’t his real name; he uses a pseudonym when talking to the press about real estate because he’s looking for a new apartment.)

Soon, journalists caught wind of the story. In May the Berlin newspaper Der Tagesspiegel, together with the German investigative group Correctiv, confirmed Syndikat’s reporting. Using information from the Panama Papers, they also revealed that the Pears brothers collected at least $53 million in Berlin rents and sales in 2017, while using standard real estate loopholes and shell companies in the British Virgin Islands, Cyprus, and Luxembourg and reported paying $197,000 in taxes on that income. Syndikat also found that the Pearses’ various Berlin companies had forced out a kindergarten and a pottery studio and had tried to remove a flower shop and a decades-old hardware store, presumably to charge higher rents. The Pearses didn’t respond to requests for comment for this story.

In Berlin, revelations about the Pearses’ real estate ventures stoked a growing rage against big landlords and property speculators. Since 2009 rents in the city have more than doubled. For people looking to buy rather than rent, it’s at least as bad—in 2017 alone, property values jumped 20.5%, the highest increase for any major city in the world, according to the real estate consulting firm Knight Frank. And while many factors are at play—most notably, a giant influx of new residents and a shortage of housing—Berliners tend to see greedy landlords as the problem.

Accordingly, Germany’s capital is taking extreme measures to stay (relatively) affordable and not go the way of San Francisco or London. Beginning in early 2020, Berlin’s left-leaning government will freeze rents for five years. Landlords will be required to show new tenants the most recent rental contracts to prove they aren’t jacking up prices. They’ll also have to follow new rent-cap rules, which for many landlords could mean lowering rents by as much as 40%. Those who don’t comply will be hit with fines as high as €500,000 ($553,000) for each violation.

Even more radically, tenant groups and thousands of activists are demanding that large corporate landlords be expelled from the city altogether, their property expropriated. The goal is to get the government to buy back roughly 250,000 properties— almost one-eighth of Berlin’s housing stock—and turn them into public housing. And while the move may sound far-fetched, it’s won support from anywhere from 29% to 54% of Berliners, according to various polls. Two of the city’s three ruling political parties have even endorsed a nonbinding public referendum on whether to force big landlords to sell their real estate to the government. (The biggest party, the Social Democratic Party, or SPD, is against the move, as is German Chancellor Angela Merkel’s Christian Democratic Union. They’ve signaled their intentions to challenge the new regulations in court.)

Berlin’s landlords, big and small, are reeling. The city’s publicly traded real estate companies, whose share prices fell for most of the summer after the government announced the planned freeze in June, complain that Berlin’s new regulations will scare off needed capital. Fewer companies will invest in modernizations to make buildings more appealing or energy-efficient, they say, and construction of new units may suffer, which would exacerbate Berlin’s shortages. “Almost 30 years after the fall of the Berlin Wall, it seems that some people want the former conditions back,” Michael Zahn, chief executive officer of Berlin’s largest publicly traded landlord, Deutsche Wohnen SE, said in an earnings call in November, referring to the former East Germany’s all-controlling government. “Tenants and landlords will face great uncertainty. That’s a poison pill for investment.”

Until about 15 years ago, Berlin was unimaginably cheap. Although vibrant and beloved by artists and students for its do-it-yourself culture, throbbing techno scene, and world-class cultural institutions, the city had little industry, few jobs, and a glut of derelict apartments. That all began to change as Berlin became the premier startup hub in continental Europe. Then big companies moved in, including Amazon, Daimler, Sanofi, and Sony, as did foreign investors. 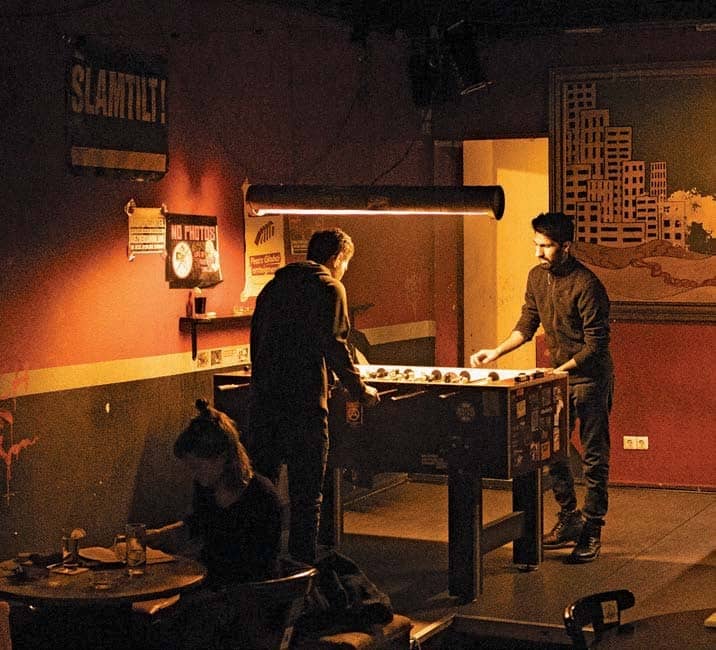