NEW AND IMPROVED AND A REGULATORY GAMBLE 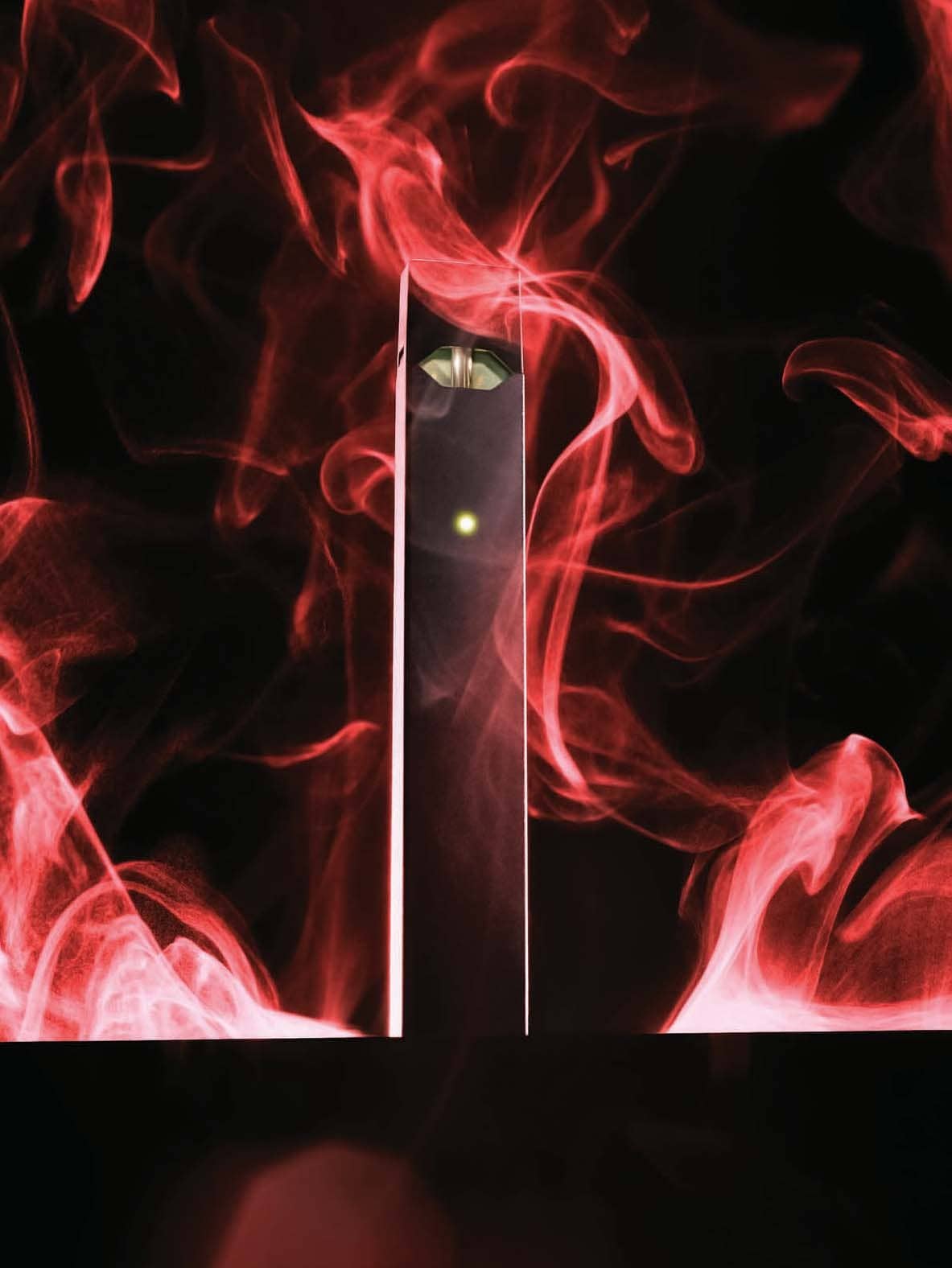 JUUL HAD A FAULTY PRODUCT IT WAS PROHIBITED FROM MAKING BETTER. IT DID IT ANYWAY. WILL THE WORLD’S BIGGEST E-CIGARETTE MAKER PAY A PRICE?

LAUREN ETTER
The e-cigarette Juul Labs Inc. introduced in the spring of 2015 was known internally by an eccentric code name: Splinter, after a rodent martial-arts master in the comic Teenage Mutant Ninja Turtles. Splinter, about the size of a thumb drive, got off to an undeniably splashy start. It appeared on billboards in Times Square. Influencers flashed it on Instagram. Wired magazine ran a story on Juul headlined “This Might Just Be the First Great E-Cig.”

Three years later, despite having entered the market almost last, Juul became its No. 1 seller. This unlikely coup was in large part about the cool factor and how it drew in younger people, ultimately engulfing middle schools and high schools across America. But Juul didn’t just outmaneuver its competitors. It did the same with regulators.

For all the market share, fame, and opprobrium Juul captured as it ascended, Splinter was a flawed product. The little plastic pods that held the device’s nicotine solution leaked. Customers complained of the liquid burning lips and blistering tongues. The staff also seeped into the device’s circuitry at times, causing it to fail. That was a potential catastrophe for a venture-capital-backed startup facing a phalanx of competitors, almost all from the deep-pocketed tobacco industry.

So Juul quietly did something that manufacturers in other industries do as a matter of course: It fixed the product. According to four former employees who spoke on condition of anonymity, the company’s engineers changed the pod design, added new, heartier internal components to resist the shutdown problem, and rewrote the device’s firmware. The updated model, delivered in late 2017, was given the internal code name Jagwar, after another Ninja Turtles character.

No fanfare accompanied the launch of Jagwar, which looked identical to Splinter. Users who bought a Juul in early 2018 wouldn’t have had any clue it was an upgraded device. They probably never noticed any change at all. Instead, the new Juul likely made customers less prone to turn to a competing product, or throw their Juul in the trash, or—this would be the worst outcome for a company that had vowed to destroy the tobacco industry—go back to regular cigarettes.

Federal regulators were similarly unaware of the full extent of the product changes, even as the Food and Drug Administration crawled all over the company for months in an effort to curb a widening youth nicotine epidemic. And therein lay the potential peril for Juul.

In August 2016, more than a year before Jagwar was released, the FDA had formally deemed e-cigarettes tobacco products. The deeming rule, as it’s known, brought the industry under agency regulations for conventional cigarettes and other tobacco products. These regulations included one particularly important provision: Manufacturers were required to secure the agency’s authorization before putting a new product on the market or modifying an existing one. The rule gave the agency breathing room to build a more robust regulatory framework for the relatively new devices. The industry was effectively frozen in place.

At that point Juul had less than 4% of the domestic market, according to data from the Centers for Disease Control and Prevention, and was behind 16 other e-cigarette makers globally. Freezing in place potentially meant accepting its status as a minor player. It also meant living with a subpar device, anathema to a company born in Silicon Valley, where the blueprint depends on rapidly solving problems and improving a product until people can’t resist adopting it. Juul wasn’t prepared to settle.

Revelations about Juul’s product changes come at a moment when the company’s future rests in the government’s hands. Already, Juul is under investigation by multiple federal agencies, including the FDA, the Federal Trade Commission, and the Securities and Exchange Commission. The reasons behind those probes include questions about whether the company illegally marketed its devices to kids and whether it engaged in anticompetitive conduct. Separately, federal prosecutors in San Francisco are probing whether Juul was truthful in its interactions with the FDA, according to a person familiar with that investigation.

Just as critical, Juul is preparing to submit its Premarket Tobacco Product Application to the FDA—essentially a request for permission to keep its product on the market. E-cigarette manufacturers have to submit such applications for their existing products by Sept. 9.

In response to requests for comment, Juul provided written answers to a list of questions. “We comply with the requirements applicable to our products. This includes the premarket-review process for new tobacco products as well as modifications to such products before they are introduced in the U.S.,” a spokesman said in a written statement. “We take our compliance obligations very seriously and understand the impact of making unauthorized modifications. We believe our products are in compliance with FDA regulation.”

The FDA launched its formal probe into Juul in the spring of 2018, when the agency sent a letter to the company requesting that it hand over documents that could shed light on the high rates of youth use and the particular youth appeal of its products. As the company’s lawyers began preparing for what would inevitably become a period of heightened scrutiny, the issue of the undisclosed modifications became a focus internally. Former Juul insiders describe an effort to limit the amount of information given to FDA officials about the changes, despite a growing sense of unease among top executives. These executives and regulatory lawyers debated whether to disclose the changes to the FDA. They did not.

The changes to Juul’s device haven’t been previously reported. FDA spokeswoman Alison Hunt said in a statement that the agency was at no point made aware that Juul had changed the device’s internal components or firmware, though inspectors had learned about changes to the pod. Informed by Bloomberg Businessweek about the additional modifications, the agency declined to take a position on whether the changes, or their incomplete disclosure, broke the law. Enforcement decisions are left up to the agency’s discretion, and some legal and regulatory experts say the FDA wouldn’t be inclined to bring down the hammer on a company that made changes to fix a defective product, rather than, say, making the device more addictive or more attractive to teenage users.