Japan Gets Serious About Flying Cars 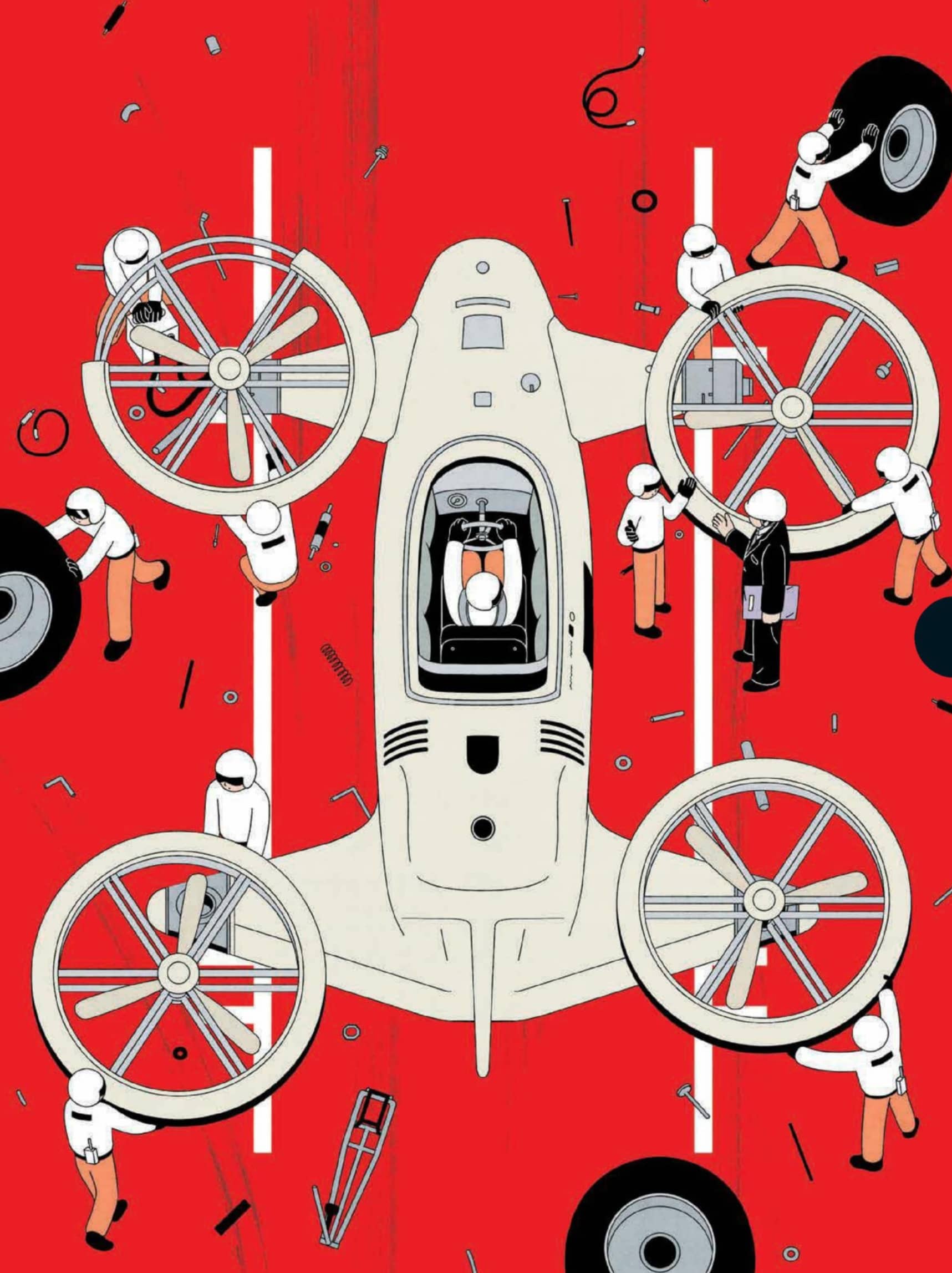 The country’s once-famed government skunk works has set its sights on aerial taxis and trucks. It has some catching up to do.

Matthew Campbell, Jie Ma, and Kiyotaka Matsuda
Japan often appears stuck in yesterday’s vision of tomorrow. Flip phones remain common. Yahoo! remains a wildly popular website. Tokyo of the 1980s may have inspired the futuristic cityscape of Blade Runner, complete with flying cars, but the fax machines that were cutting-edge when that film came out remain ubiquitous in Japanese offices today.

Ensuring that Japan doesn’t fall behind the technological curve has been the job of the Ministry of Economy, Trade, and Industry, a powerful agency housed in a squat modern office block in Tokyo’s orderly government quarter, a few blocks south of the jagged moat surrounding the Imperial Palace. The building is orthogonal in every respect, a uniform stack of concrete threaded with long, featureless corridors. The bureaucrats here guided Japan’s postwar economic miracle, a boom that gave the world the transistor radio, the Walkman, the Prius— and almost no transformative innovations since. None of the automakers championed by METI— still better known abroad by its previous acronym, MITI—is today on the leading edge of autonomous driving. Japan’s faded tech companies can’t lay claim to either smartphone or internet greatness.

Not long ago, Fumiaki Ebihara began worrying from his desk inside METI that Japan risked being wedded to another antiquated practice: traveling on solid ground. The flying-car future is coming, he wagered, and Japan could realistically figure it out first. He’s since put himself at the center of what might be the world’s most comprehensive government effort to understand and encourage flying cars, defined as electric- powered vertical takeoff and landing vehicles that will ultimately be largely or fully autonomous, as a way to revamp everyday mobility. This effort has so far produced a national road map for flying-car development embraced by industry leaders and set up a government structure to define and advance regulations. If all goes well, Ebihara believes the skies of Tokyo could be traversed with aerial taxis and delivery trucks by the late 2020s.

“Compared to other countries, Japan already has many of the strengths we’ll need for flying cars,” Ebihara says in a METI conference room. He’s a slight 33-year-old with a thatch of spiky hair, stylishly rounded glasses, and a habit—still unusual for Japanese bureaucrats—of appearing tieless in public. Just behind him is a framed poster depicting a Boeing jet soaring above a Japanese temple, over the slogan “Made With Japan,” a reminder that while the country makes few aircraft of its own, its aerospace industry is a significant provider of components for those assembled elsewhere. “Mass production, materials science, battery technologies, systems integration—we have all the ingredients,” he says. “This is a big chance for us.”

The members of Japan’s small, passionate flying-car community are mostly young, English speaking, and dismissive of the sclerotic orthodoxies that have kept their country from seizing recent opportunities. They also believe they have a genuine shot at assuming global leadership. Prime Minister Shinzo Abe’s government, eager to reinvigorate the economy and sell a fresh national image in time for the 2020 Olympic Games in Tokyo, says it’s fully behind them.