Instacart Wasn't Ready To Be Essential 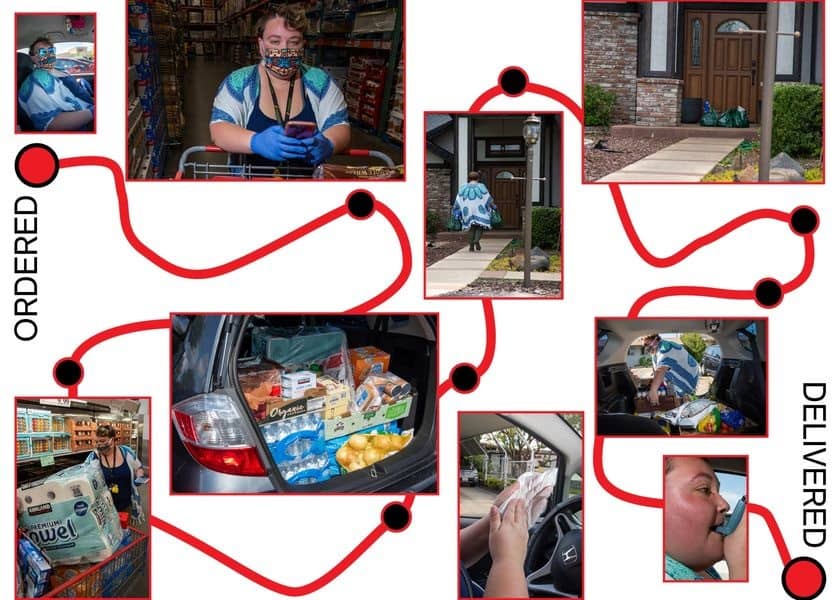 The grocery delivery startup added 300,000 workers in eight weeks, but Covid-19 is still overtaking it in more ways than one

For the first-ever Zoom call with all 1,200 of his fulltime employees, Instacart Chief Executive Officer Apoorva Mehta had an inspiring speech ready to go. It was all about coming together, noble missions, wartime footings, and the sudden ascension of Instacart Inc. from mere grocery delivery app to essential service for the human species. Then the fire alarm went off.

This was in late March, a couple of days after Californians had been ordered to shelter in place, and Mehta’s San Francisco landlord hadn’t thought to reschedule his apartment building’s routine safety test. The alarm, screeching over the Instacart team’s home-office computer speakers, was at just the right pitch to set off dogs, which could now be heard barking frantically via the microphones of employees who’d neglected to mute. Mehta was stuck. “It wasn’t one of those all-hands where I could have put myself on mute,” he says. “I was presenting.”

Covid-19 was going to change everything, he told his staff as best he could over the cacophony, and Instacart would have to prepare for an onslaught. Within weeks, the company was going to face stress on operations greater than anything anyone had experienced. “It couldn’t have been worse audio,” says Nilam Ganenthiran, Instacart’s president. “I guess it was prophetic.”

Sooner than most, Instacart saw coronavirus anxiety starting to reshape the U.S. The company charges fees for its contract workers, called “shoppers,” to gather and deliver customers’ orders (and the occasional substitution) from hundreds of retail grocers. By mid- February, Mehta and his team were noticing unusual behavior. Demand for canned vegetables, toilet paper, powdered milk, and Purell—not the sorts of things people are usually thinking about around Valentine’s Day—spiked at warehouse stores such as Costco and Sam’s Club, then at Wegmans and Safeway a week later, especially in COVID petri-dishes like Seattle and New York. By then, the usual midweek drop in overall grocery demand wasn’t happening.

“Every day, we would see that the volume was 20% higher than the last day,” Mehta says. “In a matter of a couple of weeks, we were already ahead of our end-of-year goal. A week later, we were ahead of our 2021 goals, and a few days after that, we were ahead of our 2022 goals. And so, at a certain point, we stopped counting.” The numbers looked too good to be true; they were really too true to be good. While the rest of the world was being transported into the past— quarantined at home, venturing no farther than their own neighborhoods—Instacart found itself catapulted into the future. That future was a mess.

In the handful of weeks since the fire alarm call, demand for Instacart has risen to a level investors didn’t expect to see until 2025. Instacart turned a surprise, first-ever monthly profit in April ($10 million), and says it’s on track to process more than $35 billion in grocery sales this year. That’s not the sort of number normally associated with an upmarket delivery service. In terms of pre-pandemic e-commerce, it’s a Walmart or EBay number. “@Instacart thank you for being a lifesaver,” one customer wrote on Twitter. “My husband has congestive heart failure and we have to be super careful.”

It’s tough to overstate how unready the company’s 600-ish software engineers and 180,000 shoppers were to meet the needs of millions of new customers. The models that had helped predict which items would be in stock and how long deliveries would take proved useless. To keep things running, many staffers have logged 18-hour workdays and seven-day workweeks. Nonetheless, the service has suffered, because how could it not? Deliveries used to be easy to get in an hour; the pandemic meant it could be hours, days, or as long as two weeks. Instacart became Eventuallycart.

The pandemic has also added stress to the often- miserable working conditions of Instacart’s Uber-esque contract army, which has expanded from 180,000 to 500,000 in eight weeks and, if recruiting efforts are successful, will be closer to 750,000 this summer. Shoppers say they’re hard-pressed to stay 6 feet from everyone while wandering the aisles of grocery stores and have often had to work with inadequate protective gear. (And, because the company classifies them as contractors rather than full-time employees, they don’t get workers’ compensation or traditional unemployment or health benefits, though they can now apply for Covid-19 emergency relief.)

Years of tension between the company and its shoppers appear to be reaching a flashpoint now that the contractors, whom Instacart guarantees $7 to $10 an order before tips, are among the workers that governments have deemed essential. Shoppers walked off the job en masse for a day at the end of March, demanding more masks, hand sanitizer, and access to sick pay. (Although Instacart agreed to meet some of these demands, some shoppers have continued to protest by staying off the app, arguing that the company’s response remains insufficient.) Another strike, on May 1, saw shoppers join workers for Amazon.com Inc. and other companies in protest of their conditions and pay.

“Instacart has failed to protect its shoppers,” says Vanessa Bain, a longtime shopper who organized the March walkout, in which she estimates thousands of her colleagues participated, and helped organize the similar-size May strike. She says the company’s training and safety procedures haven’t kept pace with the mass hiring. Many of the new shoppers “are people who are economically vulnerable and have been laid off,” she says. “Now they’re wandering aimlessly through grocery stores in the worst shopping conditions I’ve ever worked in.”

Mehta says safety is Instacart’s top priority (the company says it’s spending tens of millions to protect workers), shoppers want the flexibility that comes with being a contractor, and the walkout didn’t materially affect its service. Across the board, though, maintaining Instacart’s once-vaunted reliability appears to be its biggest challenge. For obvious reasons, it isn’t nearly as good as it used to be at finding and delivering the items people want. Steady profits are still far from guaranteed, and investors are fine with that since the company looks like a key fixture of Covid-19 America. But how long will that last if customers find a faster or cheaper option, including shopping for themselves again?