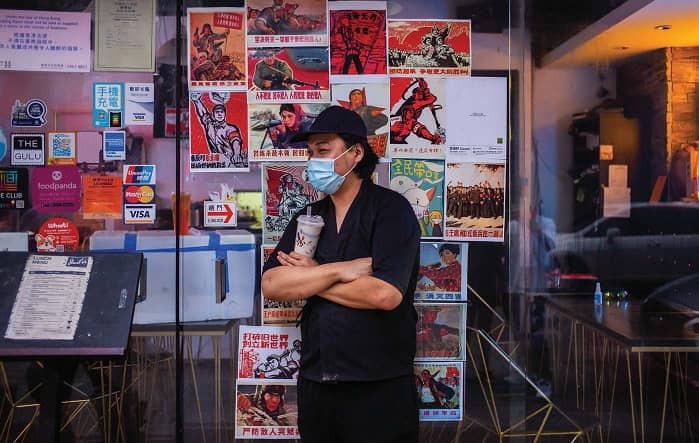 Pro-democracy restaurants get creative about speech as Beijing clamps down

The striking red-and-white protest posters on the windows of a Hong Kong restaurant proclaim in Chinese, “Revolution Is No Crime! To Rebel Is Justified!” and “Carry the Revolution Through to the End.” Once meant to rally the proletariat in Mao Zedong’s China, they carry a new meaning in Hong Kong: The opposition to China’s clampdown on Hong Kong’s autonomy may be struggling, but it isn’t dead.

Across Hong Kong, among the thousands of restaurants, shops, and other small businesses participating in what’s known as the “yellow economy” in support of anti-government protests, signs of defiance have emerged in the weeks since Beijing officials imposed a sweeping new national security law. Almost immediately, yellow establishments took down posters with protest slogans that government officials warned may be violating the law. The yellow economy got its start with restaurants that provided food and drink to protesters last year and has since come under heavy criticism from members of the pro-China establishment as well as China’s official representatives in Hong Kong.

At least one popular cafe announced it was withdrawing from the yellow economic circle, and others began to hide their affiliation. But many businesses replaced protest signs with blank Post-it notes or plain paper—the absence of free speech being its own form of dissent. And the boldest have begun to embrace Chinese Communist revolutionary slogans in an ironic appropriation of the language of China’s own revolutionary leaders and in an effort to keep speaking up without prosecution.