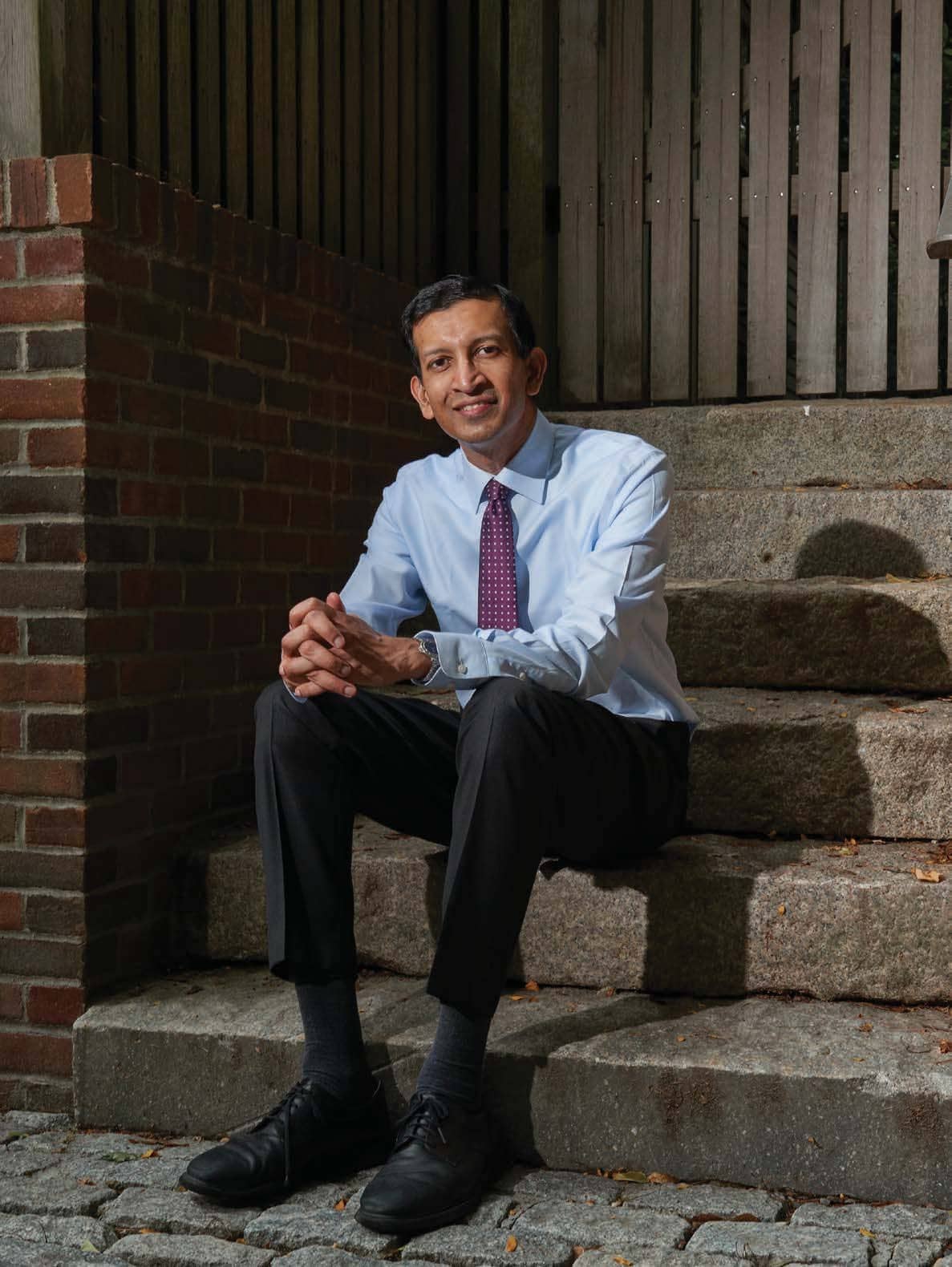 Raj Chetty hasn’t eaten at a restaurant in months. In fact, he’s barely left his home near Harvard, where he is an economics professor. The MacArthur genius grant recipient has been getting his haircuts from a stem cell biologist—his wife.

If you want to understand what’s really wrong with the economy, this is a telling symptom: Chetty used to travel widely sharing insights from his work, which mines data to paint a vividly detailed picture of inequality in the U.S. Now he, like millions of other affluent Americans, is at home. That might seem harmless—Chetty and his wife enjoy cooking together and spending time with their 5-year-old daughter—until you confront the effects on the already- precarious livelihoods of the people who fed, clothed, and pampered this professional class.

When Covid-19 hit, Chetty and his team of about 40 researchers and policy specialists dropped everything— including work on inequality in housing, higher education, and longevity—to document the pandemic’s lopsided impact. The result is a data tracker that gives a day-by-day, state-by-state, and even neighborhood-by-neighborhood view of the coronavirus economy. First uploaded in May and frequently expanded since, it relies on nonpublic, proprietary data supplied by some of America’s largest corporations to give a level of detail, in real time, that traditional economic indicators can’t match.

Last month, a couple days after former Vice President Joe Biden selected California Senator Kamala Harris as his running mate, Chetty briefed the pair over video, presenting data that demonstrated lower-income workers were bearing the brunt of the Covid recession. His chart showed that by April, the bottom quarter of wage earners, those making less than $27,000 a year, had lost almost 11 million jobs, more than three times the number lost by the top quarter, which earn more than $60,000 annually.

By late June the gap had widened further, even though many businesses had reopened. In fact, the segment of Americans who are paid best had recovered almost all the jobs lost since the start of the pandemic. “The recession has essentially ended for high-income individuals,” Chetty told Biden and Harris. Meanwhile, the bottom half of American workers represented almost 80% of the jobs still missing.

Even as the better-off watched employment rebound and the stock market surge, the virus’s economic devastation was all around them, in shuttered restaurants, hair salons, and gyms. It was no longer possible to ignore the economic chasms that separated people who used to live and work alongside one another. “That creates this very local feel to the recession,” Chetty says.

The mapping tool on his tracker allows you to visualize the divergence as it’s played out in prosperous places from Manhattan’s Upper East Side to San Francisco’s Pacific Heights. “The shock is most severe actually in the richest parts of the country and the richest neighborhoods in the country,” he says. “It’s literally the people you were interacting with who I think are suffering the most.”

Chetty has been described as “arguably the best applied microeconomist of his generation” by the American Economic Association, which awarded him the Clark Medal, often called the second-most prestigious prize in the profession after the Nobel, in 2013. Like many of his contemporaries, Chetty largely eschews theory and ideology in favor of data—the more the better. His goal in diagnosing the source of the economic pain is to help find ways to cure it. “It’s really done from the perspective of science,” says Heather Boushey, a Biden adviser who heads the Washington Center for Equitable Growth.

Chetty and his team have been talking about their newest project to any politician who will listen. On video calls with dozens of Democrats and Republicans in Congress, as well as Treasury officials and state and local policymakers, his message has been consistent: Get the virus under control at all costs—a task the U.S. has so far failed at pitifully. No matter how many businesses are allowed to reopen, normal economic life will not resume until their customers feel they’re no longer at risk of contagion. In the meantime, he tells them, target assistance to the people, businesses, and places that need it. There’s no use sending stimulus checks to households making $150,000 a year or cutting their payroll taxes. They have plenty of money; what they lack is places to safely spend it. 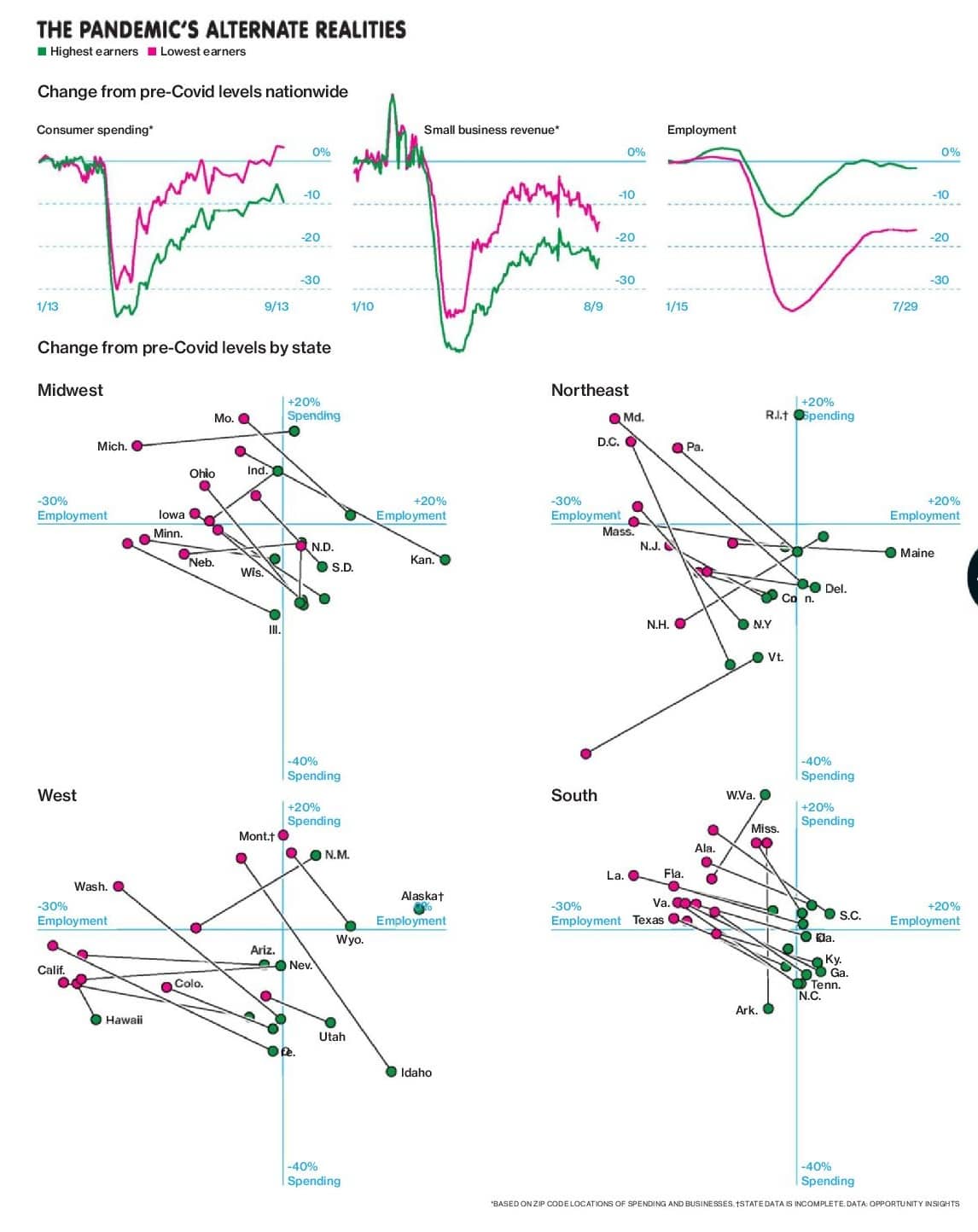 In the weeks before the U.S. government’s first jolt of stimulus ran out, Chetty was optimistic that both parties in Washington seemed to be getting the message. “I’ve consistently found an appreciation for what the data have to say, even in these polarized times,” he said then. But with infection rates spiking in a dozen states and Congress and the White House at an impasse over what should take the place of the now lapsed $600-a-week pandemic unemployment benefit and other assistance furnished through the Cares Act, Chetty has become alarmed by what his trove of data is telling him: The recovery has stalled.

Until recently, the Covid crisis of 2020 looked nothing like the Great Recession of 2008—or any other slump. With American businesses and workers held aloft by trillions of dollars in stimulus, the worst damage had been limited to certain sectors and had even started to heal. Now the economy’s woes could metastasize, taking down industries and workers that were untouched before.

All this threatens to make Chetty’s work much more difficult. The American dream is dead, as he’d proved with exhaustive government data showing today’s workers can no longer expect to earn more than their parents did. Now those left behind by the economic changes of the past few decades could be robbed of any remaining opportunities to get ahead.

One of Chetty’s most stunning findings was rendered in 2018 by the New York Times’ website in blue and yellow pixels that swarmed across the screen. It’s beautiful, almost soothing, if you can forget you’re watching a tragedy unfold. Each tiny square represents the life trajectory of one of 10,000 American men born into a family at the top 20% of the income spectrum. They fall or rise based on the extent to which they were able to match their parents’ comfortable incomes in adulthood. Those yellow pixels that keep bouncing up at the top of the screen are White men in the sample. The blue ones that keep tumbling to the bottom? They’re Black men. The animation is a simple, elegant illustration of the pernicious effects of racism on even the most privileged Black Americans.