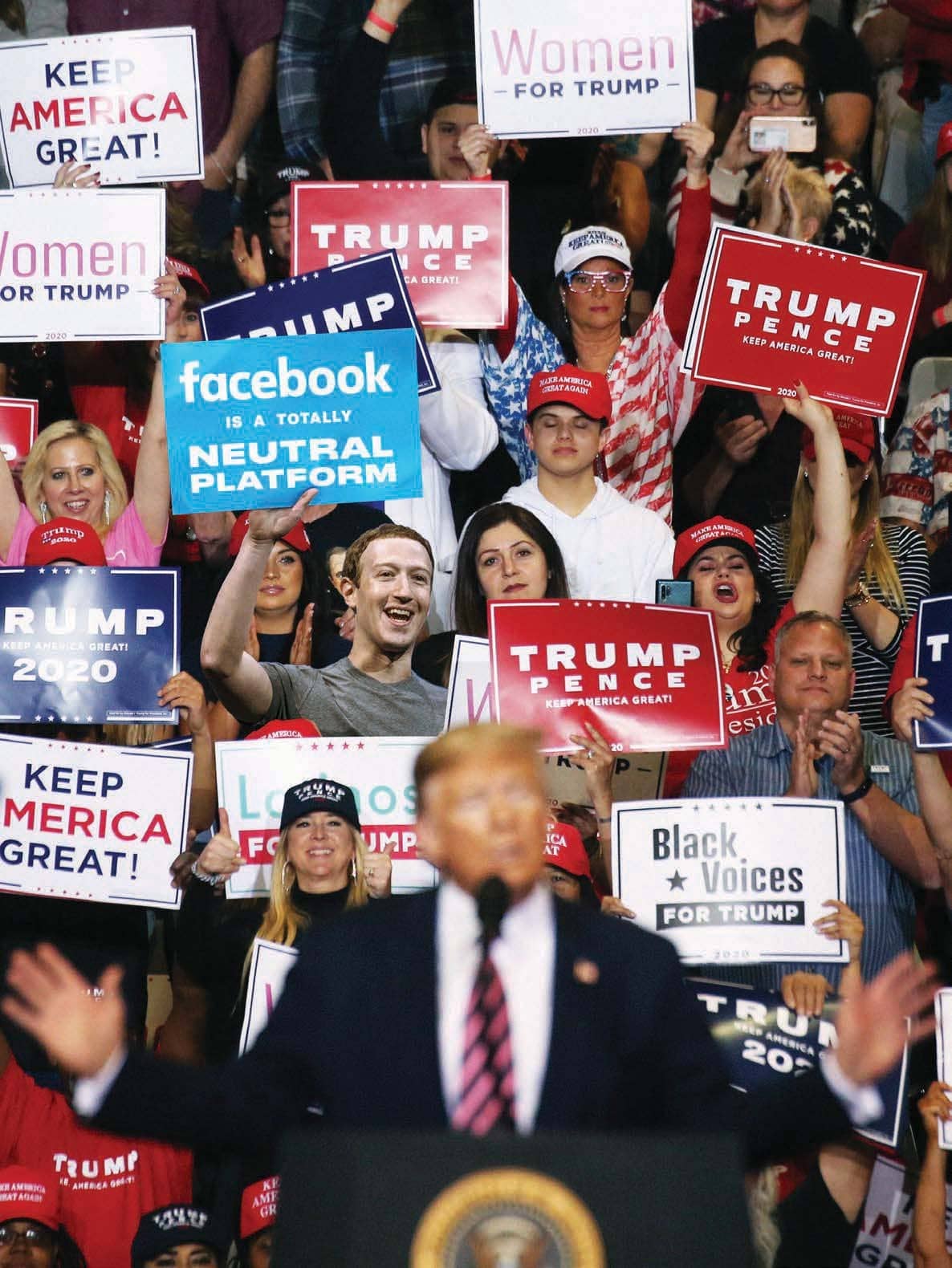 In late 2019, during one of Mark Zuckerberg’s many trips to Washington to defend Facebook in front of Congress, he stopped for a private dinner with Donald Trump and offered the president a titillating statistic. “I’d like to congratulate you,” Zuckerberg said. “You’re No. 1 on Facebook.”

At least that’s the story as told by Trump, on Rush Limbaugh’s radio show in January. Trump is technically not the top politician by followers on Facebook. That would be former President Barack Obama. But as the country’s most powerful newsmaker and the person in charge of a government that’s been aggressively pursuing antitrust cases against big tech companies, he does have leverage over Zuckerberg. So the chief executive officer could be forgiven for flattering Trump. Any moment that the president is happy with Facebook is a moment he’s not pursuing hostile regulation—or more likely, sparking a bad news cycle.

Facebook Inc. declined to comment on whether Zuckerberg indeed told Trump he was No. 1 and, if so, in what category he meant, but it’s adamant that its founder isn’t playing favorites. After the New York Times speculated that the dinner between Zuckerberg and Trump might have involved a deal over whether Facebook would fact-check the president, Zuckerberg said he was simply stopping by the White House because he was in town. “The whole idea of a deal is pretty ridiculous,” he told Axios in July.

Longtime current and former employees say this denial may be a bit misleading. Zuckerberg isn’t easily influenced by politics. But what he does care about—more than anything else perhaps—is Facebook’s ubiquity and its potential for growth. The result, critics say, has been an alliance of convenience between the world’s largest social network and the White House, in which Facebook looks the other way while Trump spreads misinformation about voting that could delegitimize the winner or even swing the election. “Facebook, more so than other platforms, has gone out of its way to not ruffle feathers in the current administration,” says Jesse Lehrich, co-founder of Accountable Tech, an organization making recommendations to tech companies on public-policy issues. “At best, you could say it’s willful negligence.”

The pattern hasn’t been confined to U.S. politics. A Facebook executive in India was accused in August of granting special treatment to a lawmaker from Prime Minister Narendra Modi’s ruling Bharatiya Janata Party who’d called for violence against Rohingya Muslim immigrants. (It was only after the Wall Street Journal reported on the posts that the company banned the lawmaker, T. Raja Singh.) A memo from a former employee, published by BuzzFeed on Sept. 14, detailed how Facebook had ignored or delayed taking action against governments using fake accounts to mislead their citizens. “I have blood on my hands,” she wrote.

“You can continuously see the challenge of them trying to have these kinds of broad principles around free expression and stopping harm, and then that mixing with the realpolitik of trying to keep the executive branch happy,” said Alex Stamos, the former top security executive at Facebook, at a conference in June. Facebook executives say their only loyalty is to free speech. “The idea that there is systematic or deliberate political bias in our decisions I really don’t think is borne out by the facts,” says Nick Clegg, head of policy and communications. “Of course, there are isolated cases.”

Facebook executives often point out that the company was seen as overly friendly to Democrats during the Obama years and that it takes plenty of heat from the Right. In the summer of 2016, the tech website Gizmodo wrote that it had been directing employees to suppress pro-Trump sites in its trending news section. The story led to a scandal over supposed anticonservative bias at social media companies, and it was in response to this backlash that Facebook started to drift rightward. The company flew conservative com mentators to its headquarters in Menlo Park, Calif., to reassure them that there was no need for concern about how Facebook operated.

The romancing continued after election day as Facebook celebrated Trump’s victory. In January 2017, the company co-hosted an inauguration party with the Daily Caller, which has published writers who have espoused white nationalist views. The lemons in the catered drinks were stamped with Facebook logos. An internal report from around the same time touted Trump’s superior strategy with Facebook ads, noting that Trump followed advice and training from the company that his opponent, Hillary Clinton, had rejected. Trump “got elected because he ran the single best digital ad campaign I’ve ever seen from any advertiser. Period,” Andrew Bosworth, who currently runs the company’s efforts in augmented and virtual reality and who was head of ads at the time, wrote in a memo to employees in 2018.

Facebook’s mostly liberal staff saw its Republican relationship-building as the price of doing business, but as the company weathered public scrutiny—about Russia’s spread of election misinformation, as well as its failure to stop Cambridge Analytica’s data-gathering operation—something changed. Among the rank and file, and even among some executives, the shift went from grudging professional admiration for Trump to a realization that he was using Facebook to attack many of the issues employees cared about. During the Supreme Court confirmation hearings for Brett Kavanaugh, during which Kavanaugh was accused of sexual assault, head of policy Joel Kaplan was shown seated directly behind the nominee, a close friend. The days following, several Facebook employees say, was the first time they saw colleagues cry openly at Zuckerberg’s weekly question-and-answer sessions.