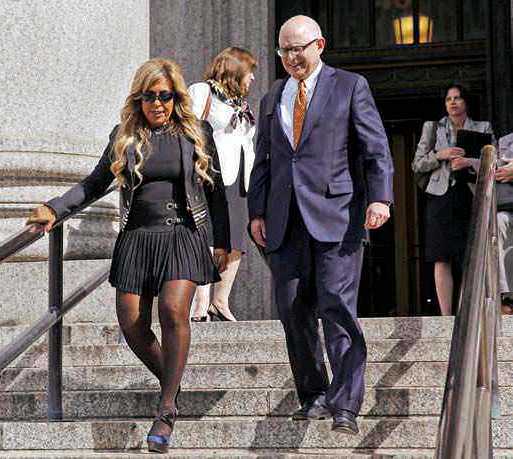 Lynn Tilton fights to save struggling companies. So why has the SEC accused her of fraud?

Lynn Tilton was rushing to get dressed at her home in Paradise Valley, Ariz., when she got a tip that the Securities and Exchange Commission was about to charge her with fraud. Taking in the news, she froze for a moment, then grabbed her laptop. It happened to be March 16, the 35th anniversary of her father’s death, a devastating event that occurred when Tilton was 19. She took the timing as an omen.

For more than five years, Tilton had known that the SEC was investigating her and her company, Patriarch Partners, a private equity firm based in New York. Months earlier, settlement negotiations had broken down. In typical SEC fashion, the agency hadn’t communicated its intentions afterward. Now that Tilton knew they planned to proceed against her, she decided to go to war.

Two weeks later, when the SEC formally announced its administrative action accusing her of defrauding investors in three funds that Patriarch operates, she was ready with a pretaped television interview denying the charges. Two days after that, on April 1, she filed a counter suit in federal court. “So that’s why, if you remember it, it goes from ‘Lynn Tilton Sued’ to ‘Lynn Tilton Fights Back’ to ‘Lynn Tilton Sues the SEC,’ ” she says, beaming. “That was not at all by accident.”

Tilton pioneered a form of financial engineering that allowed her to bundle loans to deeply troubled companies and turn them into securities, get them investment- grade ratings, and then sell them to investors. Using this method, she built Patriarch into a colossus that manages billions of dollars in loan investments. She’s also come to own 74 companies outright, including MD Helicopters, Dura Automotive Systems, and Stila Cosmetics, as well as paper mills and copper forges, many of them acquired in bankruptcy or close to collapse. Tilton says it’s her purpose in life to take a long-term view and save the companies she buys, preserving manufacturing jobs across America rather than breaking companies up and selling them off to make a quick buck—the anti-Gordon Gekko. Her companies generate $8 billion in annual revenue, according to Tilton. “We’ve saved 700,000 jobs in this country,” she says. “No one will ever take that from me.”

The SEC says she defrauded investors in three collateralized loan obligation (CLO) funds called Zohar I, II, and III by reporting the loans the funds held as “performing” to her investors when the companies were struggling to pay what they owed and perhaps should have been in default or even liquidated. In the process, the SEC contends, Patriarch retained control of the companies and collected $200 million in management fees that it shouldn’t have. “Tilton violated her fiduciary duty to her clients when she exercised subjective discretion over valuation levels, creating a major conflict of interest that was never disclosed to them,” said the SEC’s head of enforcement, Andrew Ceresney.

In her suit against the SEC, Tilton accused the agency of violating her constitutional rights by bringing its case within its in-house administrative law system. The 2010 Dodd-Frank financial reform act grants the SEC greater flexibility to file cases through its internal system, as opposed to federal court. Tilton and others argue that this grants the agency an unfair advantage. It gives her limited discovery and only four months to prepare a defense. It also forces her to have her case heard by an internal SEC judge. (A federal judge took the SEC’s side, dismissing Tilton’s suit on June 30. Tilton has appealed.)

Tilton was just getting started, electing to argue her cause with all the subtlety of Donald Trump running for president. She launched a social media campaign unprecedented in the history of financial regulation. Part straight business public relations (“I am a girl who loves mills & manufacturing. We are the proud makers of things. So proud of the men of Gorham Tissue”) and part daily aphorisms (“The beauty of butterflies like the power of poetry touch our hearts and capture our imaginations #Beautyeverlasting”), Tilton’s 140- character streams of consciousness radiate from Twitter at all hours of the day. She created a glossary of hashtags to highlight her struggle —SheForAll, FightForTruth, JusticeForLynn, etc.—and invited workers at Patriarch-owned companies to express their support. Her Instagram account features soft- focus pictures of her in studded leather, 6-inch stilettos, and backless ballgowns, sometimes posing at factories she owns, interspersed with images of butterflies. It’s all intended to point up her role as a spiritualist and savior of American manufacturing. “I purchase and lend to companies that would have otherwise been destroyed or liquidated and had absolutely no access to capital,” reads one of the captions. “She For All.”

Tilton’s savvy for making distressed debt investments has made her a very wealthy woman, while also, she argues, helping to protect American families from financial ruin. If you take her at her word, the SEC’s case against Patriarch appears ironic: The agency, in her view, is accusing her of putting the interests of the companies she invests in ahead of the financial interests of the same investors whose money she’s using to support the companies. She says she cares too much about the fate of her companies to let them die. But what the SEC may be saying is that Tilton enriches herself first, while wrapping herself in the flag.

“I have long felt that who I am and what I do is really misunderstood,” she says. “I am about making life better for other people. Yes, it’s a business, and I have borrowed money from people. But I work 20 hours a day, seven days a week, in the interest of repaying and being responsible to all my constituents. That is not an exaggeration.” She pauses to smooth her hair down over her shoulders. “The biggest issue for me is, how do I protect my companies and my people during this battle? And how do I defend my reputation during a period where people just believe headlines and don’t wait for results?”

Sitting in her office in Lower Manhattan, dripping in diamonds and sporting a deep tan, Tilton explains that none of this was supposed to happen. She is flanked by her lawyer, a crisis PR expert, and an assistant who silently places two phones and a beverage on the table in front of her. The room itself is a shrine to Tilton, decorated with pictures of her and showcasing her companies’ products. Before she started Patriarch in 2000, she says in a honeyed tone, she’d been planning on retiring and becoming “an island girl,” moving someplace quiet and beach with her teenage daughter, Carly. But then a jolt of inspiration came to her, and she realized her life was meant to be about something more than making deals.

A Jersey girl with an undergraduate degree from Yale and an MBA from Columbia, Tilton had spent 19 years working on Wall Street, initially as an investment banker at Morgan Stanley and Goldman Sachs, and later as a specialist trading distressed-company loans. In 1993 she joined Amroc Investments, a boutique investment firm co- founded by the brother-sister investing team Marc Lasry and Sonia Gardner. Tilton was a senior saleswoman with a handful of customers who paid lavishly for her ideas. “She’s brilliant,” says a former client who asked not to be named because his employer doesn’t permit him to comment publicly. “Like, extraordinarily intelligent. She knows how to make money.”