Dining Out For Democracy 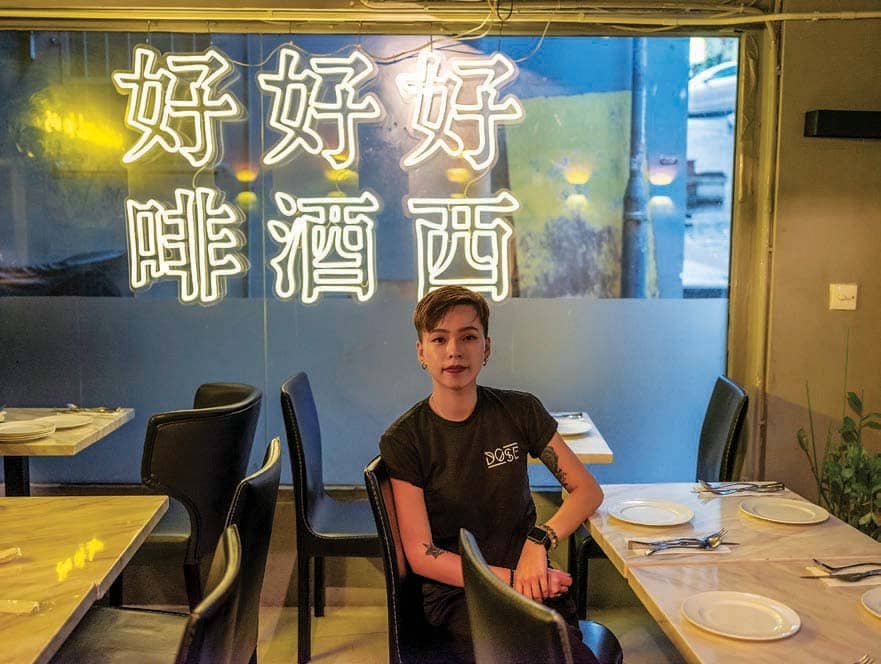 During the darkest days of the coronavirus crisis in Hong Kong, when restaurants were barely surviving, an appeal went out on social media to save Renee Cheung’s Dose. The restaurant is a “yellow” business, meaning it openly supports Hong Kong’s pro-democracy movement. Like-minded diners answered the call—though they weren’t the ones who normally frequent the city’s hip bar district.

Wearing masks and wielding walking sticks, senior citizens climbed up steep Peel Street to wait in a line 10 people deep outside Cheung’s restaurant. As an additional show of solidarity, some paid much more than their meals cost, so that Cheung’s $40-a-day take suddenly shot up to $900. “The appeal actually saved my business,” says the 24-year-old, who has fashionably short hair and tattooed arms. “The senior citizens thanked us, the younger generation, for what we are doing to support democracy.”

Similarly, at C+ Burger, sales sank when classes at the nearby University of Hong Kong were suspended during the protests last year, and they fell further when the territory’s citizens and companies began taking precautions after the first case of Covid-19 was confirmed in January. “Every single day, I would just sit here like a Buddha, waiting for business,” says owner Carrie Lau, 30. Then in February, an appeal on a yellow Facebook page summoned a crowd to the tiny storefront, and Lau sold out her 100-burger inventory in just three hours. Business has been steady since. “If there were no protest movement,” she says, “I would never have survived.”

The restaurants are part of what Hong Kongers call the “yellow economic circle,” a loose affiliation of thousands of businesses that support the movement calling for universal suffrage and other political and legal rights not available to Chinese on the mainland. (The yellow is a nod to the American suffragists of the 1800s, who chose the color to identify their cause.) Starting last year with a handful of eateries that would sometimes offer free drinks and food to pro-democracy protesters, the circle has expanded to include hair salons, florists, printers, pet groomers, accountants, lawyers, opticians, van delivery, pharmacies, tailors, jewelers, and more. It even has its own chamber of commerce.

Dozens of affinity groups have sprouted up on Instagram, Facebook, and Telegram to help spread the word. And there are at least a half-dozen apps to guide politically conscious consumers to yellow locales, some with maps that also show the location of pro-government establishments in blue (a reference to the color of police uniforms) and neutral ones in green.

Money and momentum are clearly behind the yellow movement. In district council elections in November, pro-democracy candidates trounced the pro-Beijing side. In a March survey commissioned by Reuters, supporters of the protests outnumbered opponents by a ratio of roughly 2 to 1.

To identify themselves as yellow, establishments put up posters bearing protest slogans or depicting demonstrators in heroic poses. Sometimes businesses are simply perceived as yellow. The large supermarket, drugstore, and electronic-goods chains owned by Li Ka-shing are considered by many to be sympathetic to the cause, or at least not opposed. The 91-year-old tycoon took out a newspaper ad last year calling for an end to violence without explicitly condemning the protesters, as pro-government elites have repeatedly done.

Patronizing yellow businesses gives Hong Kongers who sympathize with protesters’ political goals a way to demonstrate with their pocketbooks instead of in the streets. In an article published in December, Simon X.H. Shen, a professor at the Chinese University of Hong Kong, estimated the market for yellow businesses could exceed HK$100 billion ($12.9 billion).

“Since we have to spend money anyway, we want to encourage and support the yellow businesses,” says a middle-aged Hong Kong professional who asked to be identified as Ms. Li. She figures about 80% of all her spending happens inside the yellow economy, and says she’s willing to go far out of her way to patronize a restaurant or store featured in one of the apps. That level of dedication adds approximately HK$1,000 to Li’s monthly expenses. “Most people don’t want businesses from China or that support China to earn our money,” she says.