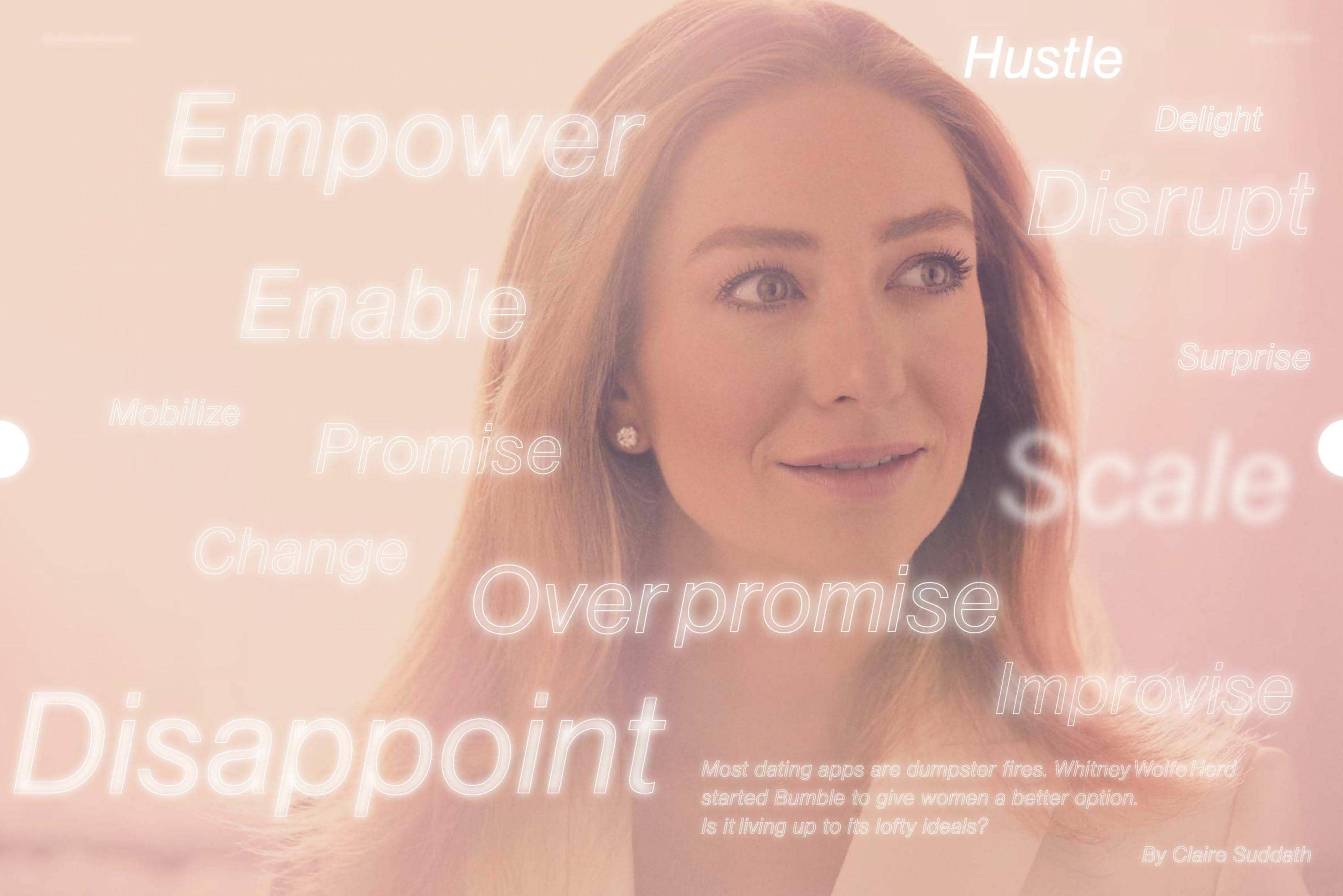 Most dating apps are dumpster fires. Whitney Wolfe Herd started Bumble to give women a better option. Is it living up to its lofty ideals?

Whitney Wolfe Herd remembered the day she decided to go after dick pics.

“It started with me barging into a meeting and being like, ‘Guys, we’re going to make a law, and we’re going to make dick pics illegal!’ ” she recalled. Wolfe Herd founded and runs Bumble, the dating and networking app that says it offers women a safe way to meet people online. Bumble had already banned users from posting such pictures to their profiles and was working on software that could detect them when sent in a message. Yet according to a company user survey, about a third of Bumble women had received lewd photos from men, whether through text or other social media that Bumble couldn’t control. “I was just like, ‘This is bullshit,’ ” Wolfe Herd said. If it were illegal to flash someone on the street, she reasoned, there should also be a law against flashing people online. Bumble is based in Austin, so Texas seemed like a good place to start.

Wolfe Herd didn’t have many political connections in the state, but her husband did. Michael Herd is president of his family’s oil business, Herd Producing Co., and a family friend of Gaylord Hughey, an oil and gas attorney who’s one of Texas’ top Republican fundraisers. Wolfe Herd called Hughey, Hughey called a lobbyist, the lobbyist got Democrats and Republicans to sponsor a bill, and in August, Governor Greg Abbott signed it into law. Now, anyone sending photos of “intimate parts” to someone in Texas without consent could be fined $500.

Journalists weren’t allowed at the closed-door bill signing, but Bumble wanted me to be there. I’d been working on a story about the company’s pursuit of gender equality for almost a year. I flew to Austin for what turned out to be a lot of clapping, some polite laughter, and the ceremonial giving away of the governor’s signing pens. When it was over, Wolfe Herd was ecstatic. “I have five other ideas of the next laws I want to pass,” she told me, “basically extensions of what you’ve seen today.” She wanted a law against online harassment, another to end verbal abuse. “Catcalling,” she added. “There’s got to be a digital counterpart to that.” She wanted to make sure delivery apps conduct background checks on their workers. “I want to take it to the federal level next,” she said. “I can’t say we’re a mission-driven company if we don’t put our money where our mouth is.”

This kind of attitude has distinguished Bumble from its rivals. It’s also part of the company’s focus on women. Everything about the brand—its bright honeycomb logo; its pop-up parties at Coachella and in Aspen, Colo.; its embrace of Lizzo memes on Instagram—is designed to attract young women who live and work in cities and order everything from wine to potential partners on their phones.

Men are on Bumble, too, of course. Most dating apps skew disproportionately male, and the company has had no problem signing them up. But on Bumble they seem almost an afterthought: If a man and woman both swipe right on each other, the man can’t talk to the woman unless she contacts him first. For that reason, and because Wolfe Herd and 81% of her employees are female, articles about Bumble often describe it as an app “by women, for women.” Nearly every interview Wolfe Herd does, be it on a morning talk show or a South by Southwest panel, focuses on how the app is designed to prevent the harassment and verbal abuse women face when they try to date online—or be on the internet at all.

“We want women to feel safe and empowered while using Bumble,” Wolfe Herd told Teen Vogue in 2015. Two years later, on CNBC, she said that making women message first “reduces harassment, creates a kinder exchange between two people,” a statement she’d later repeat to me. In 2019, CBS This Morning said Bumble made online dating “safer,” Inc. claimed Wolfe Herd was “on a mission to clean up the internet,” and Fast Company reported that she was building “the female internet.” Bumble’s message of empowerment has given it an almost spotless reputation. “It’s created this kind of groundswell of ‘Wow, this company is doing good,’ ” Wolfe Herd said.

Over the years, Bumble’s name has become shorthand for a company that takes equality seriously. Women who’ve been harassed or discriminated against in other areas of their life lament on Twitter that there’s no such thing as “ Bumbleified rideshares,” “Bumble for gamers,” or even Bumble “for people at bars so I screen out people who step on my feet.” Several women told me they use Bumble because they think it’s safer than other dating apps.

Today, Bumble is the second-most popular dating app in the U.S., behind Tinder. The company says it has 81 million users in 150 countries, though only 11 million of them use the app at least once a month, according to mobile analytics company App Annie Inc. Still, a lot of those people pay for extra features that, among other things, let them see who liked their profiles ($24.99 monthly) or “spotlight” their account so it shows up prominently in other people’s feeds ($3.60 a month).

Bumble doesn’t share its financial information, but former employees say that such extras have made the company profitable since at least 2017, and that at one point last year, Bumble was pulling in about $10 million a month in revenue. In November the private equity giant Blackstone Group Inc. announced a majority stake in Bumble’s parent company, MagicLab, at a valuation of $3 billion, and installed Wolfe Herd as chief executive officer in place of its controversial founder, a Russian billionaire and tech entrepreneur Andrey Andreev. In a statement, Wolfe Herd said she would “keep working towards our goal of recalibrating gender norms and empowering people,” bringing Bumble’s feminist mindset to the rest of the company.

This is a pivotal moment for Wolfe Herd. It’s her chance to affect the lives—and relationships—of millions of people. Online dating is the most common way to find a romantic partner in the U.S. According to a 2019 survey by researchers at Stanford and the University of New Mexico, almost 40% of heterosexual couples and 65% of same-sex ones now meet online. And the issues Bumble is tackling are endemic social ills. The Pew Research Center says that more than 40% of people in the U.S. have been harassed or threatened online; women, especially those under 30, are more than twice as likely as men to receive sexually violent threats they find “very upsetting.” So far, no online platform has gotten a handle on this kind of abuse —though many, like Bumble, are trying.

After months of reporting, it wasn’t at all clear how Bumble was keeping women safer or leading to more equitable relationships. Wolfe Herd and others talked a lot about how they were addressing these issues, but the company failed to provide tangible evidence that it was successful. Instead, Wolfe Herd spoke in general terms. At one point, she said, “Our mission, really, ultimately, is to stop misogyny.” The idea that a dating app could eliminate something that’s gone on for millenniums seems naive, as if Seamless were claiming that faster taco delivery could end world hunger.

Based on interviews with more than a dozen people who’ve worked for Bumble or its parent company, it seems to have no system in place to verify that its app is safer, or its users less sexist, than elsewhere. (Most asked for anonymity because the company’s nondisclosure agreement bars employees from saying anything “likely to be harmful” to Bumble’s reputation.) The workers said Bumble establishes policies that it assumes will lead to change but doesn’t follow up to see if they actually do. Instead, the only thing Bumble does know is that people “perceive” it to be safer. In other words, it tracks its reputation. “From an empirical perspective, they can’t say, ‘We have limited misogyny on Bumble’ because they never had a way to measure it,” said Jessica Carbino, who worked for more than a year as Bumble’s sociologist before leaving in March. “If they have that data,” she said, “I haven’t seen it.”

In addition, eight former employees said the company’s internal culture is the opposite of the values of kindness and respect it preaches. They said Bumble’s top executives run the company as if they were the popular group in high school. One woman said that when Bumble had only a handful of employees, it was common for one or two people to be excluded from outings with no explanation. Another said she had no idea that a place so outwardly committed to empowering women would be such a disempowering place to work. In response, a Bumble spokesman said in an email, “Inclusion is at the heart of what we do—and our workplace reflects that.” Later he added: “At Bumble we are committed to empowering women and promoting integrity, equality, confidence, and respect during all stages of the dating experience.”

Wolfe Herd is 30 years old. She has thick, blond hair; big, almond-shaped eyes; and a tendency to talk about herself in a self-deprecating, endearing way. The first time we met, at the beginning of last year, we spent hours in her office, drinking Topo Chico seltzer and talking about our families and backgrounds as Van Morrison played quietly on a faux vintage stereo. Growing up in Salt Lake City, she said, “I didn’t know what the word ‘feminism’ was—I thought it was a bunch of 1970s women.” I told her I knew what she meant.

Wolfe Herd went to college at Southern Methodist University, and then in 2012, at 23, she became Tinder’s first vice president for marketing. She engineered the app’s explosive growth on college campuses by persuading women in sororities to sign up—then showing fraternities how many Tri Delts or Pi Phis they could meet if they did the same.