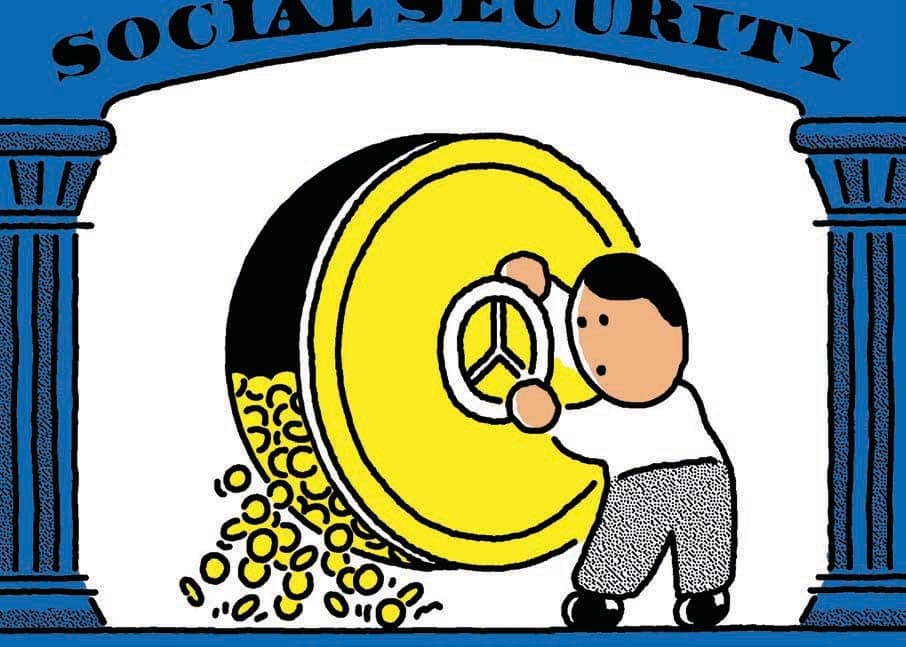 Social Security hits its peak this year. To replenish, it may need to take out loans

By Joel Weber and Howard Chua-Eoan

A monthly check from Social Security is the only thing keeping millions of older Americans out of poverty. Half of married senior citizens and 70% of unmarried seniors get at least half of their income from it, according to the Social Security Administration. It’s the indispensable retirement solution. But the trust fund that pays old age and survivor benefits is going to run out of money sometime in the 2030s.

Those hard facts have raised a question: Should Social Security stop depending just on payroll taxes and the trust fund to pay benefits and start supplementing those sources with general tax revenue? The debate came to a boil in August, when President Trump floated the idea of a permanent cut in payroll taxes, which would presumably necessitate a big infusion of general tax revenue to keep beneficiaries whole.

A lot of advocates for Social Security worry that tapping general revenue will make people perceive the program as welfare rather than a mutual insurance compact among workers. Democratic Representative Richard Neal of Massachusetts, chairman of the Ways and Means Committee, responded to Trump’s gambit with an Aug. 14 statement saying, “Make no mistake: This is an attempt to undermine Social Security entirely.”

On the other hand, drawing on general funds would make it easier to pay scheduled benefits to the Baby Boom generation without big hikes in payroll taxes. It could also lessen inequality, since the IRS’s tax code is more progressive—that is, with higher rates for higher incomes—than the Social Security Administration’s. “The most likely scenario” as the path of least resistance “is somehow general revenues will be tapped” to help pay benefits when the trust funds run dry roughly a dozen years from now, says John Shoven, an emeritus professor of economics at Stanford.

Benefits are paid out of two trust funds, a big one for old age and survivor benefits and a small one for disability insurance. Since a formula change in 1983, the funds have grown because receipts and interest have exceeded expenses. Sometime this year—it’s not clear when—their combined value is peaking at $2.9 trillion. Then it will be all downhill, because benefits have begun to exceed the combination of receipts and interest. The trustees’ report this spring predicted the main fund would run out of money in 2034 and the disability fund in 2065. The Covid-19 pandemic is likely to accelerate the depletion of the main fund by two or three years by reducing payroll tax receipts and pushing people into earlier retirement, Shoven estimates.

Exhaustion of the funds doesn’t cause benefits to go to zero, because fresh money will still arrive in the form of payroll taxes on current workers. But that will cover only 76% of old age and survivor benefits, the Social Security trustees estimated this spring.

Faced with this scenario, the usual response is to choose from an unpalatable menu for fixing Social Security’s finances, such as raising the retirement age, choosing a stingier cost-of-living adjustment, or increasing the payroll tax rate. Democratic Representative John Larson of Connecticut, chairman of the Social Security subcommittee of the House Ways and Means Committee, is sponsoring the Social Security 2100 Act, which raises benefits slightly while gradually lifting the payroll tax rate for workers and employers from 6.2% to 7.4% and subjecting wages over $400,000 a year to payroll taxation.

But none of the choices on the menu undo the core problem, which is that American society has aged. The number of beneficiaries per 100 covered workers has risen from 25 in 1965 to 29 in 2000 to 36 this year, and it’s expected to reach 45 by 2040. And wages—the source of Social Security financing—have shrunk as a share of the economy. Labor’s share of the costs of the private, nonfarm business sector fell to 62% in 2018 from 68% in 2000, according to the Bureau of Labor Statistics.

Using general revenue would allow Social Security to tap into sources of money that have grown as a share of the economy, such as business profits. Capital’s share of the costs of private, nonfarm businesses has risen to 38% from 32% over the 18 years since 2000, the BLS calculates. That trend could continue if automation wipes out more jobs while raising income from investments.