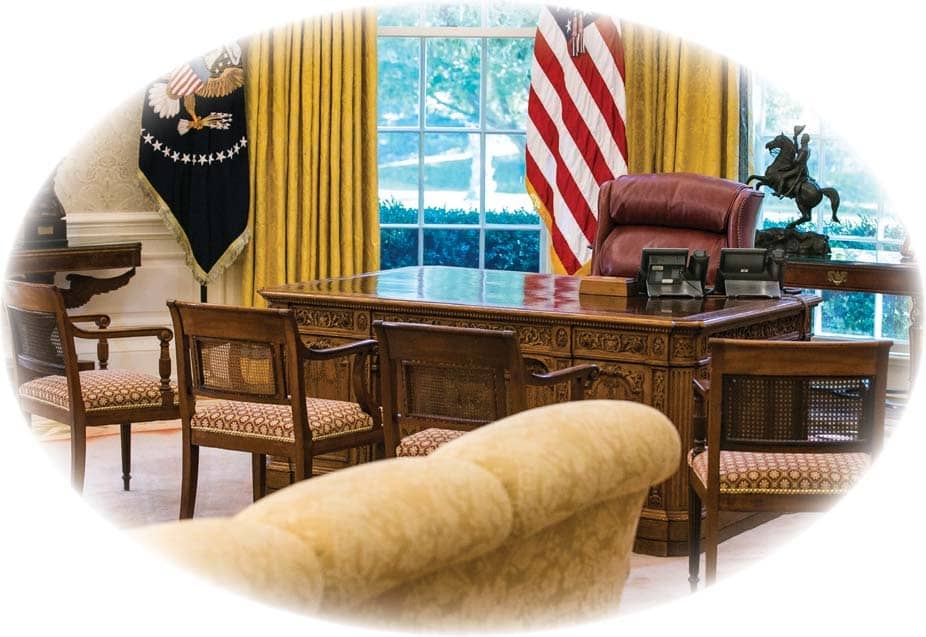 Whatever happens in the election, America must overhaul its government. Here’s how President Bill Lincoln—the fusion of two giants of the 19th century—would approach reform

By John Micklethwait and Adian Wooldridge

For a country that is losing a war, the U.S. is having a strange election. One hundred and eighty thousand Americans have died from Covid-19—more than double the number who perished in Vietnam, Afghanistan, and Iraq combined. America has done significantly worse than most other rich countries, with a mortality rate of 500 deaths per million people compared with just over 100 in Germany, and fewer than 10 deaths per million in China, Japan, South Korea, and Taiwan. Of course, different countries count Covid-19 casualties in different ways, but the gap is immense. If the virus is a test of government effectiveness, then the world’s most powerful country has failed spectacularly.

Indeed, the coronavirus crisis could well turn out to be a historical turning point. Five hundred years ago, China was the greatest power on the planet, with the world’s biggest capital city and best-run government. The West then rose by mastering statecraft—first in Europe’s competing nation-states, and then in the U.S. As the 1960s opened, America was aiming to put a man on the moon, while millions of Chinese were dying of starvation. Ever since that decade, Western governments have ossified while Asian governments have caught up, and in many cases overtaken the West. The average citizen is not only safer from Covid-19 in Singapore, South Korea, or Taiwan than in the U.S.—they also enjoy better health and send their children to better schools.

So Covid-19 is a wake-up call for the West. The encouraging news is that the U.S. has reinvented itself before. A reformed America could lead the West again; but if Washington snoozes, it could follow the way of other empires that crumbled, notably Rome and Athens (which gave way to autocratic Sparta in the wake of a plague).

Given the size of the challenge, the presidential election seems strangely irrelevant. Both parties are stuck in a pre-Covid mindset: The Republicans continue to claim government agencies are a wealth-destroying encumbrance, while the Democrats remain wedded to public-sector unions. Both parties are running campaigns based on scapegoating, not structural reform. President Trump’s strategy is to blame China for America’s problems. The strategy of Democrats and their nominee, Joe Biden, is to blame Trump.

But don’t be fooled: China is not to blame for America’s failings, many of which are structural. And Trump did not invent a health-care system that is skewed toward elective surgery for rich patients, nor did police start becoming brutal on his watch. America’s schools have underperformed for years. Trust in government has been crumbling for decades (like the nation’s roads and bridges).

Of course, America has many strengths, not least Silicon Valley, Wall Street, and Hollywood. But the vibrancy of its private sector only demonstrates just how far its public sector has slipped. In the age of Amazon, Facebook, and Google, much of the federal government lives in the Industrial Age, and some of it further back. The Department of Agriculture still employs 100,000 people spread out across 4,500 locations—and American students still take long, knowledge-destroying summer holidays so they can go and work on the harvest.

American government needs a far bigger overhaul than anything the candidate of either party is considering. To imagine what a real reformer would do, conduct the following thought experiment: Reach back into the great era of government reform in the 19th century, resurrect that era’s two most formidable English-speaking politicians, Abraham Lincoln and William Gladstone (who was four times prime minister of Britain when it was the most powerful country in the world), fuse them together, and put them in the White House on a platform of reforming American government.

What would President Bill Lincoln do?

Our new president would combine the best of his two antecedents. Neither man was perfect—especially when young—but once in power they showed a willingness to cleanse government. From “the People’s William” (as Gladstone was known), Bill Lincoln inherits a drive to direct resources away from the Old Corruption of special interests toward those who really need them. From “Honest Abe,” he gets a desire to unite his country and rid it of the scourge of racial injustice. Both men believed in improving the lot of ordinary people—especially through education, but they also hated taxes. President Bill Lincoln could be either a Republican or a Democrat—he is both a “left-wing” social reformer and a “right-wing” small government man who believes in self-reliance. He is above all a patriot who is terrified by the way that the U.S. is falling behind authoritarian China.

Having prepared for office not by rote-learning partisan talking points but by studying the places that work better (both other governments and the private sector), President Bill Lincoln would pursue the following 12 reforms. Some involve more government, but overall, we would have a much smaller, smarter state that provided more protection to the needy. These reforms are all based on what already works elsewhere, so the barriers to implementing them are political, not practical.

The obvious place for Bill Lincoln to start is by dealing with the complete lack of preparedness for the virus. The U.S. was warned: Covid-19 was the third outbreak of a coronavirus this century, after SARS (2003) and MERS (2012). President Bill Clinton created a national pharmaceutical stockpile, but supplies were allowed to dwindle. In 2018, Trump dissolved the National Security Council’s “pandemic preparedness” team. The Centers for Disease Control and Prevention were underfunded.

These mistakes need to be rectified, but smartly. Rather than building up central stockpiles of medical supplies, Bill Lincoln could copy the cheaper, more flexible Swiss system, where each employer is responsible for keeping up-to-date kits for its workers. He would also ask himself: Where else is America-unprepared to protect its citizens against catastrophe?

One obvious area is climate change: Although the exact nature of the threat is debated, the danger that a warmer climate poses (not least in parts of the U.S.) is so great that it is foolish not to take out insurance. The cheapest premiums are multilateral ones: America will get more protection through a global-warming agreement than it ever will unilaterally. But Bill Lincoln could still act at home. The $20 billion in subsidies that go to the fossil fuel industry would disappear. He would follow 25 countries and introduce a carbon tax, which hands the job of choosing technologies to the market. Some of the proceeds could be directed toward workers who lost their jobs, such as coal miners in West Virginia.

The warnings America had about viruses striking its population were sporadic; the warnings about racist policing have been regular and repeated. Nearly 30 years after one of us covered Rodney King’s beating in Los Angeles, Blacks are still three times more likely than Whites to be killed by the police.