A Sea Change For The Supreme Court 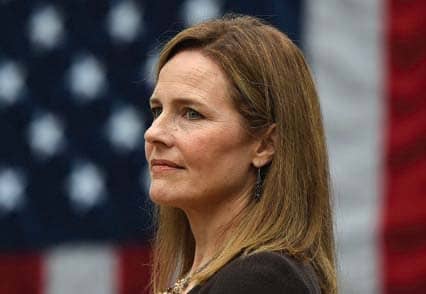 The Sept. 18 death of Justice Ruth Bader Ginsburg set up a political fight over the future of the high court, with Republicans determined to seat her replacement before Election Day over Democrats’ objections.

If Donald Trump’s nominee, Amy Coney Barrett, is confirmed, it would mean a profound change no matter who wins on Nov. 3: The court’s 5-4 conservative majority before Ginsburg died would become a 6-3 supermajority. Here’s a primer on the transition and what to expect from a new court.

Amy Coney Barrett could be the most conservative new justice to join the U.S. Supreme Court since Clarence Thomas, a dream addition for many Republicans.

Nominated on Sept. 26 by President Trump, Barrett champions the “originalist” approach that has become conservative orthodoxy for interpreting the text of the Constitution. She is an acolyte of the late Justice Antonin Scalia and a devout Catholic.

Should she win Senate confirmation to succeed Ginsburg, as expected, Barrett could bring about the biggest legal shift in decades— and at 48, she could serve on the high court for decades. Her vote would make the court under Chief Justice John Roberts more likely to overturn Obamacare, disable federal regulatory agencies, and expand gun rights. She might even give conservatives their long-pursued goal of toppling the 1973 Roe v. Wade ruling.

Speaking in the White House Rose Garden after being introduced by Trump, she vowed to emulate Scalia, for whom she clerked in the court’s 1998-99 term. “His judicial philosophy is mine, too,” Barrett said. “A judge must apply the law as written. Judges are not policymakers, and they must be resolute in setting aside any policy views they might hold.”

Barrett rates as more conservative than either of Trump’s first two nominees, Neil Gorsuch and Brett Kavanaugh, according to a predictive scale developed by academic experts. Gorsuch and Kavanaugh have been generally reliable votes for conservative causes, though Gorsuch disappointed many backers in June with his majority opinion extending federal anti-discrimination law to LGBTQ workers.

Barrett has voiced skepticism about the Affordable Care Act, also known as Obamacare. In a 2017 law review article, she criticized Roberts’s opinion upholding the law as pushing the text “beyond its plausible meaning.” The Supreme Court will take up a new constitutional challenge to the health-care law on Nov. 10.

Her record, says Adam Winkler, a UCLA School of Law professor, suggests she’d be even more supportive of gun rights than Scalia, who wrote the landmark 2008 decision that said the Second Amendment protects individual freedoms.

Barrett grew up in a New Orleans suburb and attended a Catholic girls’ high school before graduating from Rhodes College and then Notre Dame Law School in 1997. She clerked for conservative Washington, D.C., federal appeals court judge Laurence Silberman before Scalia. She returned to Notre Dame as a professor in 2002 and taught there full time until Trump appointed her to the federal appeals court in Chicago in 2017. Barrett and her husband, Jesse Barrett, a federal prosecutor, have seven children, including two adopted from Haiti.

Religion plays a central role in Barrett's life. In a 2006 Notre Dame Law School commencement speech, she urged graduates to direct their legal careers toward “building the Kingdom of God.” She has served as a trustee of a school run by a small Christian group called People of Praise that combines Catholic teachings with charismatic practices.

Barrett made her personal opposition to abortion clear in a 1998 law review article about Catholicism and judging. She wrote that abortion and euthanasia “take away innocent life” and that abortion is “always immoral.”

But Jonathan Adler, a Case Western Reserve University law professor who is friendly with Barrett, says no one should assume she will vote to overturn Roe. “She thinks Roe was incorrectly decided as an original matter,” Adler says. “But that’s different from the question of whether or not it should be overturned.” —Greg Stohr and David Yaffe-Bellany, with Bill Allison, Perry Cooper, and Josh Wingrove

Senate Republicans plan to start Barrett’s confirmation process on Oct. 12. It will begin with hearings in the Judiciary Committee (where Democratic vice presidential nominee Kamala Harris is a member). A full Senate vote is tentatively planned for the week of Oct. 26, the week before the election.

This timeline is unusually fast. Trump announced Barrett as his nominee on Sept. 26, less than 40 days before the Nov. 3 election. Only twice since 1975 has the chamber been able to confirm a Supreme Court pick in less time: In 1975, the late John Paul Stevens’s confirmation took just 19 days, while former Justice Sandra Day O’Connor was confirmed 33 days after she was nominated in 1981.